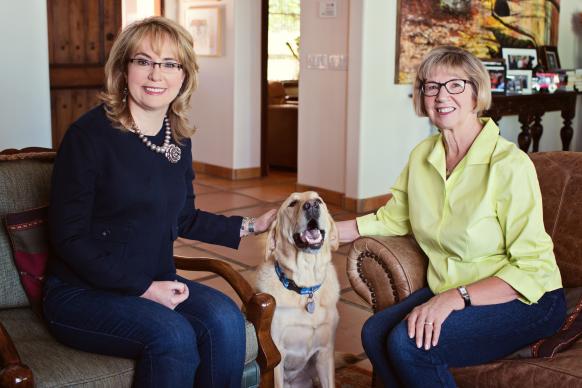 Former U.S. Rep. Gabby Giffords (left) and Pam Simon, who worked on Giffords’ congressional staff, were wounded in the Jan. 8, 2011 mass shooting near Tucson, Arizona. They remain close friends and got together recently at Giffords’ Tucson home. ~photo Shelley Wellander

United Methodist Pam Simon was shot with U.S. Rep. Gabby Giffords. Now they team up as advocates against gun violence.

Pam Simon didn’t dodge the bullet that came at her on Jan. 8, 2011. But the bullet dodged her vital organs, missing her heart by a quarter inch.

Simon, a longtime United Methodist, keeps the projectile on her desk in a specimen jar. It reminds her to be grateful for every day, and to keep advocating for gun violence prevention.

“I definitely feel I’m called at this time to do this work, to try in whatever small way I can to make it so that other people don’t have to experience what I experienced,” she said.

Simon survived the infamous mass shooting outside a Tucson area grocery. Her boss, former U.S. Rep. Gabrielle “Gabby” Giffords, was gravely wounded. In a matter of seconds, six people were killed, with 13 wounded in all.

Since then, Simon has spoken, written, lobbied, testified and demonstrated for background checks and other measures. Her efforts won her a White House “Champions of Change” Award in 2014.

At age 69, with a first grandchild to dote on and her husband, Bruce, needing care because of failing eyesight, Simon still spends about 20 hours a week on gun violence prevention.

“I don’t think she could do anything else but be an advocate,” said her friend the Rev. Cynthia Langston Kirk, a retired United Methodist elder.

A smiling, laughing woman by nature — she adds sunshine to blue-sky Tucson — Simon is serious and rather fearless in her work. She has been known to chat up AK-47-toting counter-protesters.

Still, Simon acknowledges it took a while to find her footing in gun violence prevention advocacy.

Her life, like her bullet, has taken interesting turns.

They grew to love the desert landscape and here raised their two children. Pam would also teach school — first home economics, then English — for more than two decades.

After retiring as a teacher in 2006, Simon volunteered in Giffords’ first congressional campaign. She decided that Giffords — a young Democratic state legislator — was hampered by wearing black suits all the time.

Simon didn’t know Giffords all that well but risked asking for her clothes size and permission to buy her some brighter campaign garb.

“As I’m saying this, I’m thinking, ʽOh, my God, she’s going to be so insulted,’ ” Simon said. “She grabbed me by the shoulders and said, ʽYes!’”

Acquaintance turned into friendship during a wardrobe makeover at Giffords’ place. Giffords won the election, and Simon went to work for her as part-time community outreach coordinator in Tucson.

On the chilly Saturday morning of Jan. 8, 2011, Giffords — having won a third term in a close election — held a “Congress on Your Corner” event on the covered concrete walk outside a Safeway. Simon was helping.

The normality was broken for her when she heard a series of loud pops.

“My brain said, ʽCap gun, bad joke,’” Simon recalled. “And then I was on the ground. I thought, ʽNothing will ever be the same again.’ ”

Jared Lee Loughner, a young man later diagnosed with paranoid schizophrenia, had emerged from the grocery and fired a Glock semi-automatic pistol. He discharged 33 bullets before bystanders tackled him.

Giffords, the principal target, was shot through the head. A bullet entered Simon’s wrist and moved on into and through her torso, stopping in her hip.

She lay so still on her chest that some at the scene thought she was dead. She remembers a presence, which she understands to be God, assuring her she would be OK. But the presence didn’t ease the pain.

A nurse named Nancy Bowman and her husband, David, a physician, had come to the Safeway for Brussel sprouts and milk. The Bowmans tended victims, Nancy kneeling next to Simon.

“I said, ʽJust lay there, and the paramedics should be here any second,’” she remembers. “Typical Pam Simon. She had a smile on her face, and she was talking to me.”

Simon underwent surgery at University Medical Center. Her children flew in. Other hospital visitors would include President Obama and First Lady Michelle Obama.

The Rev. David Wilkinson is retired now, but then he was pastor of St. Francis in the Foothills. He and wife Susan were in northern Colorado when they got word of the shootings, and drove all night so he could see Simon.

“I walked in and she said, ʽHi,’ ” recalls Wilkinson, whose first report was that Simon and Giffords had been killed. “I just broke down.”

The mass shooting was an international story, but in Tucson it was — still is — the local equivalent of 9/11. Some 38,000 items were left at makeshift memorials by the grocery, hospital and Giffords’ office, including a Purple Heart.

Simon, who was released from the hospital the following week, recalls getting cards from United Methodists across the country. Her local church came through in a big way.

“I had casseroles for three months,” she said.

Simon would struggle with survivor’s guilt and PTSD. But just five weeks after the shootings, she returned to work in Giffords’ office.

Giffords was away, having begun a long effort to recover speech and mobility. She resigned from Congress in January 2012, but her office remained open until Ron Barber — another staff member wounded in the shooting — won a special election to replace her.

With that transition in June 2012, Simon retired again. She and Bruce looked forward to a quieter life. But the very next month came a morning when she woke and he told her, “There’s been another one,” meaning the mass shooting in a movie theater in Aurora, Colorado.

Simon soon got a call from a representative for New York Mayor Michael Bloomberg. Would she, as a mass-shooting victim, be part of an advertisement pressuring politicians to address gun violence?

As a congressional staffer, Simon had to suppress her views, including on gun laws.

Now she was free.

“I had just a nanosecond of hesitation, then I said, ʽDamn right. I’ll be glad to,’” Simon said.

Thus began Simon’s advocacy against gun violence. She has been on national TV, and been to the White House, U.S. Capitol, Arizona State Capitol and many other places. She spoke last June to the Desert Southwest Conference, urging churches to take on the gun violence issue.

The former teacher has done her homework, and she doesn’t miss a chance to point out that the gun homicide rate in the U.S. is 25 times higher than in other high-income countries.

Simon has worked with Bloomberg’s Mayors Against Illegal Guns and Moms Demand Action for Gun Sense in America, which formed after the Sandy Hook Elementary School shootings, on Dec. 14, 2012.

Those groups combined as Everytown for Gun Safety in 2014, and Simon worked there part-time until March. Mom Demands Action retains its identity within Everytown, and Simon currently serves as the Moms’ faith-group outreach leader for Arizona.

“What she brings to the movement is that teacher energy,” said fellow advocate Lisa Kiser. “She’s incredibly good at growing and nurturing other people.”

Some in the movement admit to discouragement, given the lobbying strength of the National Rifle Association. Simon was present and grieved on April 17, 2013, when the U.S. Senate narrowly defeated a measure expanding background checks on gun sales, despite polls showing strong public support.

Still, she points to the growth in number and membership of gun violence prevention groups, and to the fact that 18 states now have universal backgrounds checks on handgun sales. Two more states vote on the question in November.

“I’m tremendously optimistic that in the long run we will be able to, not eradicate, but certainly rein in the problem,” Simon said.

It doesn’t hurt that Giffords and her husband, former astronaut Mark Kelly, have joined the cause. Though longtime gun owners, they’ve started Americans for Responsible Solutions to elect candidates who support background checks.

Simon and Giffords — who has made much progress in her recovery — remain close friends and get together fairly regularly in Tucson.

“There will be times when I say something about Jan. 8, and we’ll process it a bit, then she’ll say, ʽMove forward,’” Simon said.

The bullet on Simon’s desk helps her keep going in that direction. Faith, too.

“I don’t necessarily say, ʽOK, God saved my life so I can be a gun violence prevention advocate,” she said. “But for this place and this time, this is what I need to do. And I haven’t looked back.”