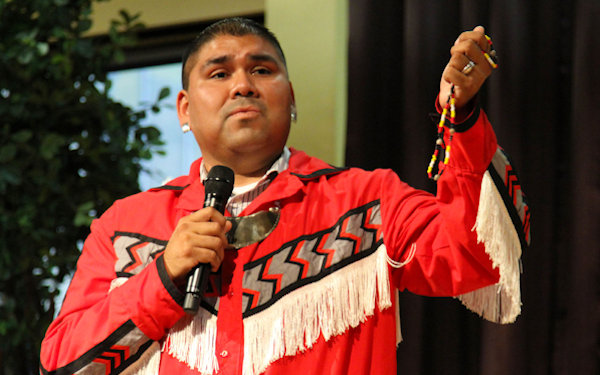 The Rev. Glen Chebon Kernell, Jr. is the Executive Secretary of Native American & Indigenous Ministries, Justice & Discipleship, General Board of Global Ministries. He will be present at the 2016 Annual Conference in East Lansing. - umc photo

An Act of Repentance and Reconciliation at the 2016 Annual Conference begins a blessed journey.

Editor’s note: the showing of “Our Fires Still Burn” that was scheduled for Wednesday, April 6 at Asbury UMC in Flint has been cancelled.

“I would dare say; the chances of an average person knowing an average Indian in an average lifetime are pretty slim. Think about it!”

There’s a lot to read on 2016.MichiganUMC.org about the First Steps toward Repentance and Reconciliation with Native American People and the Act that will take place at the Annual Conference on June 10 at 3:45 pm in Breslin Center. But perhaps none of the words are more powerful than these shared by Ben Greane.

Ben was born in 1916. He was an active member at Greensky Hill Indian United Methodist Church until his death in 1991. Ten years before Ben died, he wrote, “The Michigan Indian.” Those seven pages recount his life story and his first-hand perspective on the treatment of Michigan’s first people through the course of the last century.

Ben is honest and Ben is authentic and it is in that same spirit that the Area now moves toward an experience in Lansing that makes a commitment to new life together. Ben Greane’s statement concludes thus: “Perhaps at last the Native American can say what he needs, what he is, and what he will become; perhaps at last the Anglo-American can listen, support and empower. Self-determination may be a long trail but the journey must be undertaken.”

Much can be done to prepare for the powerful experience ahead at Annual Conference:

Ben Greane’s witness will be incarnated in the present by a special guest to the 2016 Annual Conference, the Rev. Glen Chebon Kernell, Jr., Executive Secretary of Native American & Indigenous Ministries, Justice & Discipleship for the General Board of Global Ministries.

He explains, “What we do not realize is that, either by practice or by silence, the church has played a role in this part of the history of Native persons of this continent.” Such a past leaves a footprint on the present. “For the continued healing and wellness of Native persons within the church and those outside the church, we must recognize,” Kernell states, “that this entire country was built upon the traumatic experiences perpetuated upon Native peoples and communities, and has a profound impact on Native communities to this day.”

The Act of Repentance and Reconciliation is not an exercise in guilt. It promises to be a significant experience of new awareness, healthy relationship, and future partnership.