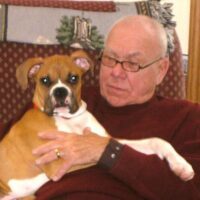 After retiring from the Navy, Robert attended Claremont School of Theology, earning Master of Divinity and Doctor of Ministry degrees (1979). He then served 20 years as a pastor in the United Methodist Church, leading congregations in Mason, Caledonia, and Allegan, MI.

Robert was an avid reader of The New York Times and books about history, literature, philosophy, science, and theology. He also was a lover of jazz music, and a devotee of the TV show M*A*S*H. Robert was well known for his unique sense of humor; in-depth discussions about books, current events, and religion; and for driving a bright red Triumph TR4 convertible. Robert was a faithful companion for five Boxer dogs (Motif, Geoff, Chance, Mittens, and Buddy). He also was respected as the lone Buckeye among throngs of Spartans and Wolverines.

Most importantly, Robert will be remembered as a loving father and grandfather, devoted friend, steadfast shipmate, and caring pastor. Fair winds and following seas, Commander Wessman.

Cremation has taken place. A memorial service will be scheduled for the spring or summer. In lieu of flowers, please consider a donation to a public education or veterans program in your community.