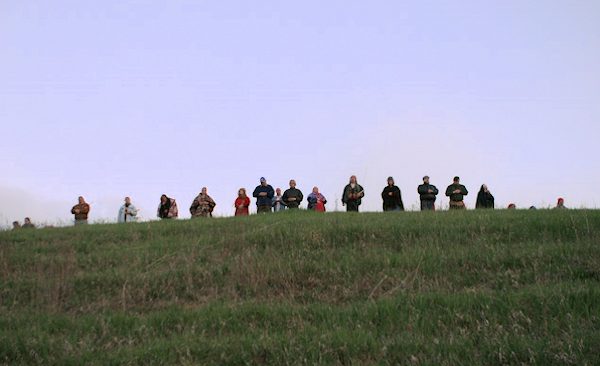 A sunrise pipe ceremony at Emiquon (Mother Earth Healing Day). The people are standing on top of Ancestors' Ridge, one of the richest archeological sites in the continental United States. While to many it simply looks like a pasture without any cattle on it, It is estimated that about 10,000 years of Indigenous ancestors and ceremonial sites are in that ridge or around it. ~John Ballard photo

The media sees “protestors” in North Dakota. The indigenous leaders see themselves as “protectors.”

I am finalizing this blog on the morning after the presidential debate. I will spare you my comments about the debate or the debaters themselves. What I will offer from that event is that numerous commentators and interested individuals observed that how each of us perceived that debate depends on the place from which we were viewing it. It may have nothing to do with objective or factual reporting, but the lens through which we see the world.

Every one of us has been shaped by the cultural context(s) in which we were raised; yet as Christians we affirm that we may also be re-shaped by transformative immersions along life’s journey. The challenge is whether or not we will allow our original lenses to be transformed so that we can see the world and situations though new eyes. When Jesus admonished his disciples in the passage from the Gospel of Mark, he was drawing upon Jeremiah 5:21: “Here this, O foolish and senseless people, who have eyes, but do not see, who have ears, but do not hear.”

So what if we apply this same idea of the need of having our “eyesight” transformed as we look at an issue that has been largely kept out of the secular news? For a very brief news cycle we heard of a “pipeline protest” near the Standing Rock Sioux Nation reservation in North Dakota. There is often a misunderstanding in Western minds about who the Indigenous leaders are doing this resistance work for. The news media and state government labels these peaceful and courageous servant leaders as “protestors” and “trespassers”, which infers the pipeline company employees are not trespassing. From the Native lens the Indigenous leaders understand themselves to be “protectors” not “protestors”. They have a moral, relational, and spiritual obligation to protect the earth from harm, to protect the water from being poisoned, to protect the future to the seventh generation.

How you interpret the issues and behaviors in this situation depends largely on the place from which you view it. So, allow me to suggest we take a quick look at scripture. In the book of Genesis we hear clearly that God as Creator “saw everything that (God) had made, and indeed, it was very good” [Genesis 1:31]. As a starting place, caring for the earth would seem to be caring for that which God called good. Where our lenses sometimes get cloudy is around the text that says that once the human species was created, God said to them, “… fill the earth and subdue it; and have dominion over …” [Genesis 1:28].

The challenge is in how biblical translators, as well as you and I, have historically interpreted the original Hebrew word for “dominion”. The dictionary suggests that dominion means “sovereignty and control” and offers synonyms such as “Supremacy, dominance, superiority, etc.” Those come out of Western governmental and corporate greed images as well as old Greco-Roman domination cultures. It is not hard to see how this perspective could quickly lead to abusive practices that benefit those in power at the expense of those who live in marginalized realities.

“Being an Indian means saying that the land is an old friend that your father knew, your grandfather knew—your people have always known.”

Do we honestly think that is how our loving Creator God intended? In helpful contrast to that the biblical commentary indicates that “it (dominion) must be understood in terms of care-giving, even nurturing, not exploitation. As the image of God, human beings should relate to the nonhuman as God relates to them.” (The New Interpreter’s Bible, Volume 1). Theologian Walter Brueggemman contends that “It has to do with securing the well-being of every other creature and bringing the promise of each to full fruition.”  (Interpretation: A Bible-Commentary for Teaching and Preaching).

Allow me to help you see more clearly through these words of cultural wisdom from a Gwich’iin leader in Northwest Canada: “Being an Indian means saying that the land is an old friend that your father knew, your grandfather knew—your people have always known. If the land is destroyed, then we too are destroyed. If you people ever take our land, you will be taking our life.” Dr. Jace Weaver (Cherokee), Franklin Professor of Religion and Native American Studies at the University of Georgia, further explains this deep connection to a specific place and context, “It is this intensely intimate relationship to the land that makes removal of tribal nations from their homelands, depriving them of their numinous geography—as I have written—tantamount to psychic homicide.” [from Coming Full Circle: Constructing Native Christian Theology]

Weaver goes on to say, “In contrast to indigenous peoples, when one thinks about sacred places for Christians, it is about the built environment. It is about constructed and contained space.” When I travelled in Palestine/Israel decades ago I have to confess that I was not impressed by all of the buildings that had been erected and designated as “holy sites” because something may have taken place there. One historian did remind me that if some group had not done this in the past we may not know where such sacred experiences took place. I will give some credence to that. However, the most moving experience of all for me was to see the huge ancient road stones under what was then thought to have been the Fortress of Antonia. The tour guide intimated that these were real stones upon which a bloodied Jesus may have stood before being taken away to be crucified. The stones were of the earth and knew the story. They did not need a building on top of them to tell that story.

When the bulldozers ripped open the earth near the Standing Rock Sioux Nation reservation the workers and machines decimated Inipi Lodge rings, ancient burial sites, and other spots of deep historical relationship to the Lakota/Dakota people. How would you feel if someone, for the purposes of corporate greed, dismantled the Church of the Nativity in Bethlehem? What kind of human outcry might there be if a multinational corporation decided to erect upscale condominiums on the Temple Mount in Jerusalem? What would all Michiganians say if a floating oil rig were constructed right next to the Mackinaw Bridge?

George E. Tinker (Osage), Ph.D., gives us a glimpse into the worldview or lens of the Lakota/Dakota in his introductory on how various cultures read the bible, Reading the Bible as Native Americans, in the New Interpreters Bible Commentary: “… all Native American spiritual insights, and hence theology, must begin with Creation … All see themselves as co-equal participants in the circle, standing neither above nor below anything else in God’s Creation. There is little sense of hierarchy in this cultural context, even of species … The Lakota and Dakota peoples have a phrase used in all their prayers that aptly illustrates the Native American sense of the centrality of creation.  Mitakuye oyasin functions somewhat like the word amen in European and American Christianity.  … The usual translation is: ‘For all my relations.’”

I have shared with some of you in other times that Mitakuye oyasin is a way of viewing and relating to our world. I live in relationship to life and other living things, and how I interact determines some of the outcome. If I poison life with chemicals or with violence, the harm I create actually poisons me back. If I care, like a shepherd or steward, for creation it will nurture me back. The servant leaders of the Standing Rock Sioux Nation have been joined by other protectors from as many as 250 tribal nations. I had an opportunity to speak last week with Bishop Bruce Ough, our United Methodist bishop of the Dakotas/Minnesota Area. His face lit up as he shared that the seven historic tribes of the Sioux Nation have now built a sacred lodge at the resistance camp, and for the first time in 100 years have lighted a combined sacred fire.

When we focus on our shared concern for others and our earth, and not on our individual survival or enhancement, we give witness to a larger historical commitment. Perhaps there is a lesson for us as United Methodists here in Michigan.