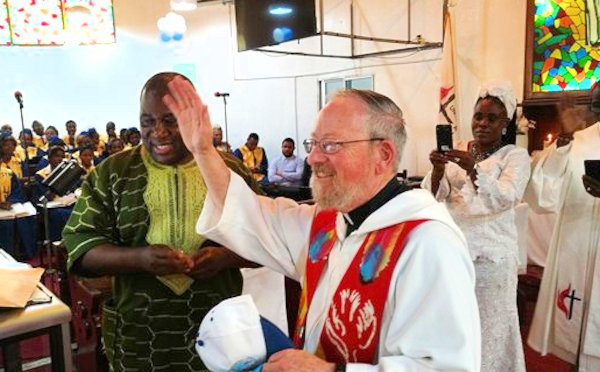 The Michigan Conference embraces a covenant with Liberia that began with the Detroit Conference in 1999.

“It’s not just what we give them, it’s what they give us as well.” That’s how former District Superintendent and Assistant to the Bishop Terry Euper described the long-standing relationship between the Michigan Area and the United Methodist Church in Liberia. For Michigan United Methodists the relationship goes back to the ministry of Michigander missionary Nancy Lightfoot who served in Liberia for many years with the support of local churches across the state. Originally a nurse at Ganta Methodist Hospital, Lightfoot began a translation of the Bible into one of the native languages in 1989. It was completed in 2000 and tragically she died in 2001 in a car accident. But her legacy lives on in the life-giving Ministry Partnership between the two conferences.

The Rev. Duane Miller recently returned from a trip to Liberia on behalf of the Michigan Area.  He was one of the invited participants in a “Round Table Conference” sponsored by the General Board of Global Ministries in Ganta City, Liberia. It included 75 participants representing USA, Germany, Norway, Sweden and the General Boards of the denomination in conversation with the leaders of the United Methodist Church in Liberia. The purpose of the Round Table was to establish goals for the next five years for the Liberian Church and its partners around the world. The result was a list of 12 priorities which can provide a focus for the work of the global partners in the years ahead.

“As we become one conference in Michigan, we are also one with our brothers and sisters around the world, especially in Liberia.” ~ Rev. Duane Miller

The Covenant Relationship between the Liberia Annual Conference and the Detroit Annual Conference was originally signed in 1999. Over the years that covenant has been fulfilled by filling containers, purchasing a truck for the conference and frequent visits by persons and teams traveling in both directions. The yearly Annual Conference in-gathering of offerings from local churches has raised about $20,000 per year for the work of the Liberian Church. Several districts and many local churches have been involved in digging wells and building parsonages, clinics and churches.

Following the years of civil war in the country (1989-1997), Liberia was left with many orphans, so the Detroit Conference built the Bishop Judith Craig Children’s Village, named for our Bishop at the time. On Miller’s recent visit, he met the 69 children currently living at the village and toured the 19 cottages, some of which are in need of renovation. The village includes a K-12 school with an enrollment of 615 students, and a clinic. Recently the United Methodist Church of Norway installed a solar power unit to provide electricity for the facility.  First UMC Midland, MI is funding a well and pumping system and the Detroit Conference recently purchased a van for the village.

It was a great personal joy for Miller to visit the “Rev. Duane Miller Administrative Center” which houses the District Superintendent and the district offices in Cottontree, Liberia. The building was begun by the Central United Methodist Church of Waterford, MI and is named in recognition of the Rev. Miller’s years of friendship and service on behalf of the Liberian Church.

The Liberia Ministry Covenant is currently being rewritten and Bishop Quire will be here in 2019 or 2020 to join Bishop Bard in signing it. Having just returned from Liberia, Miller says, “Now is the time to renew our covenant and revive our relationship with the church in Liberia. As we become one conference in Michigan, we are also one with our brothers and sisters around the world, especially in Liberia.”

For more information on how you or your church can become involved in the Liberia Ministry Partnership, contact Rev. Miller at duane@ddmiller.net or 989/426-2644.