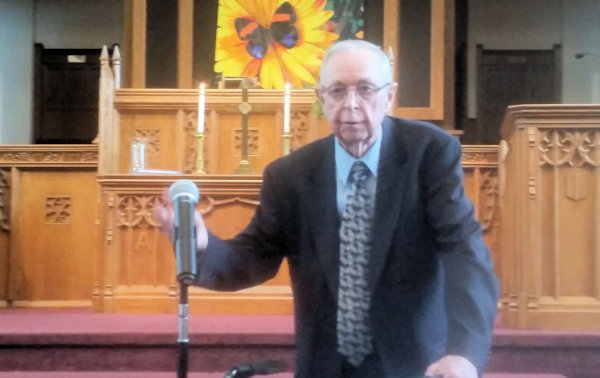 A pastor answers the phone in Grand Rapids and Christ’s church in Cameroon is born.

The phone rang in his office over 30 years ago, but the Rev. Charles Garrod remembers the call like it was yesterday. “Worship was about to start,” Charles recalls. “The caller was Victor Enow Ayuk, a student at nearby Calvin College who wanted a ride to church.” Pastor Garrod’s wife, Marcile, offered to go pick Victor up. “That day,” Charles states with conviction, “the door was opened for Cameroon to have United Methodist churches.”

On Sunday, June 18, 2017, Grand Rapids: Trinity United Methodist Church celebrated their special relationship with Victor Ayuk and renewed their commitment to today’s ministry in Cameroon.
Bishop David Bard and Grand Rapids District Superintendent Bill Haggard were present with the congregation to rejoice in the connectional power in this story.

Here’s how Charles recounted the story to those in the pews last Sunday:

There were many factors involved in this venture. Obviously, the Holy Spirit was at work. Such things don’t happen unless the church listens to the Holy Spirit.

This would not have happened as it did without our connectional system. [Once home] Victor Ayuk felt called to bring United Methodism to his country in West Africa.

Through my correspondence with him and learning of what he was doing on weekends with his Bible and Hymnal, Victor was starting churches out under the trees. I called the General Board of Global Ministries. They visited Victor.in Cameroon and said, “We will send missionaries.” Which they did.

The Board called for churches in the U.S. to be supportive of this Initiative and Trinity United Methodist is one that has been faithful to that call. By the grace of God, we will continue our support.

I have been given a lot of credit over the years for what has been accomplished. However, so many of you present today, and some who have gone on before us, have done much more. When Victor’s father died and his support was gone, you gave and that got Victor through Calvin College and Wesley Seminary so he could work in the government during the week and for the Lord on the weekends. I say, “Thank you for your labors and let us continue to take seriously the words of our Lord to ‘Go and make disciples of all nations.’”

As Charles indicates, the response to the college student’s phone call soon became larger than the life of Victor Ayuk and bigger in scope than Trinity United Methodist Church.

Victor Ayuk was called home to Cameroon part-way through his studies at Wesley Seminary. He majored in political science at Calvin and he was summoned to work for the government. But he remained true to his calling, was commissioned as a lay pastor, and began establishing churches in villages and towns. His support came out of his own pocket and gifts from Grand Rapids: Trinity.

In 1999 the General Board of Global Ministries, after a successful evangelism effort in Russia, embarked on establishing a number of “country initiatives.” That was when Charles Garrod informed the Board that Cameroon was ripe for the harvest. With the involvement of its (then) Women’s Division, the General Board made Cameroon a denomination-wide focus in 2005.
Cameroon is a French-speaking country located in West Africa with a population of 16 million. Estimates made in 2017 indicate the nation is 70% Christian; 20% Muslim; and 10% practicing indigenous religions.

The Lord’s work in Cameroon continues today under the leadership of Rev. Nkemba Ndjungu and his wife, Mbwizu. At present, there are more than 1,000 church members in 22 congregations. Twenty-five Cameroon nationals are in leadership and there are nine probationers ready to be ordained later this year.

Victor Ayuk is now retired from pastoral ministry but leads a village prayer cell as he continues to work for the government. The Ndjungu’s have given personal assurance to Rev. Garrod that Trinity’s support has not been forgotten. “We of the Cameroon Church have a great respect for Charles Garrod.” They also report that it’s the Wesleyan emphasis on personal faith and social holiness that keeps the church growing in Cameroon.

Trinity’s Mission Chair, the Rev. Lynn DeMoss, encouraged continued support of the ministry. “Every church needs a bigger windshield than a rear view mirror. Trinity didn’t just birth the child in Cameroon, we now must continue loving the child into maturity,” DeMoss said. Trinity member Suzanne McKenzie Hewett presented the church with a collection of materials chronicling their partnership with Cameroon.

In his sermon on June 18, the Rev. David Nellist, Trinity’s current pastor, said, “We are celebrating super heroes today; super heroes like Superman, Wonder Woman and Marcile and Charles Garrod.” Commenting on the Great Commission, Nellist said, “Jesus needed people to go and do something. Marcile and Chuck did something along with Victor Ayuk… the Garrods were super heroes as they did the right things and made the right decisions for God’s work in Cameroon.”

Bishop Bard added his blessing. “I know Trinity is involved in the Vital Church Initiative, which is a little like a medical exam in which you discover things about yourself; things you joyfully celebrate and things you want to do something about.” He expressed gratitude for the congregation’s involvement with Cameroon and concluded, “Build on the wonderful legacy of this church as you move into the future.”

When the phone rings, it just may be the Holy Spirit trying to make a connection. Connection happens when the call is answered. Mrs. Garrod was once told, “Marcile, you’re the one who started the United Methodist Church in Cameroon.” She responded, “Victor did. I just helped him along.”

Such Christ-like help and hospitality is what makes disciples and transforms the world.

~information from Trinity UMC Mission Chair, Rev. Lynn DeMoss, contributed to this report. The story of the beginnings of the Cameroon Initiative is told in the July/August 2002 edition of New World Outlook, the official publication of the General Board of Global Ministries.