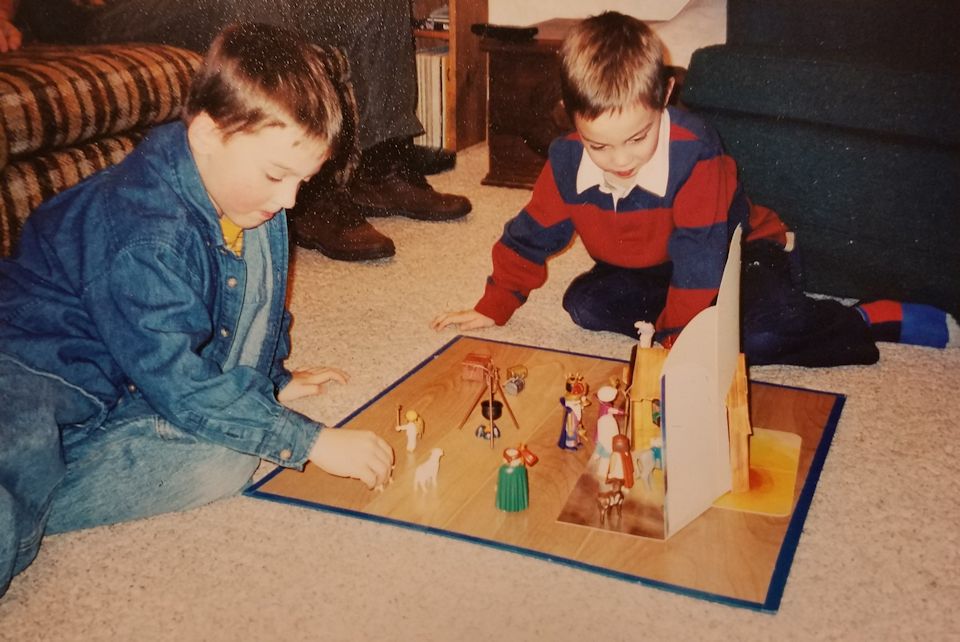 Grandsons, David (right) and Drew, were the first to set up the "Activity Set" that was their Christmas gift to Nana in 2002. ~ photo courtesy Kay DeMoss

He said “activity” instead of “nativity.” Maybe a six-year-old theologian named Drew had not made a mistake but instead voiced a great truth about God.

Six-year-old David and Drew, our twin grandsons, were excited. It was December, and they had arrived in Muskegon to spend a weekend at Nana and Grandfather’s house. They came with a gift in hand and didn’t want Nana to wait until Christmas to open it. In fact, in typical little boy fashion, they opened it for her.

The second the wrapping paper was off, Drew cried, “Can we play with the Activity Set?!?!?!” Once the scene was arranged to their satisfaction, Grandfather brought out a Bible and told the boys the story from Luke’s Gospel. When he closed the book, an anguished cry went up from David, “You forgot the part about the cats!!!” Indeed, in addition to the usual cast of characters, the Playmobile nativity set included two black kittens. 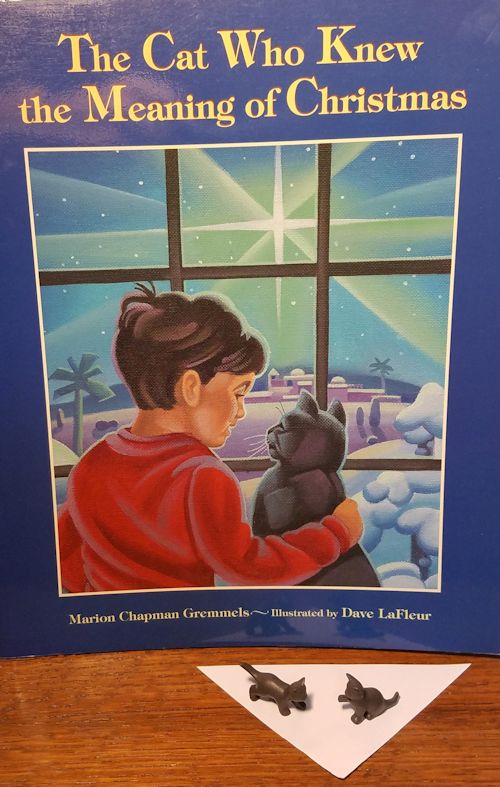 A trip to the mall was in order. (This was in the epoch before Amazon.) We walked into the bookstore and were fortunate enough to find the lost gospel by Marion Chapman Gremmels, “The Cat Who Knew the Meaning of Christmas.” Its reading that night made both boys very happy.

“The Activity Set.” I have been an editor long enough to know that some typos and malapropisms hold more meaning than the word that was intended.

To be sure, a kindergartener, like Drew in 2002, was more familiar with “activity” than “nativity.” But perhaps his child-like mind had grasped a greater truth of a Living God, active from the very start, long before the birth of his Son depicted in the plastic manger in the middle of our family room floor.

Grandfather was reading from the Gospel of Luke. And she gave birth to her firstborn son, wrapped him in bands of cloth, and laid him in a manger because there was no place for them in the inn. Perhaps Drew was speaking from the Gospel of John. In the beginning, was the Word, and the Word was with God, and the Word was God. … What has come into being in him was life, and the life was the light of all people. Who wouldn’t want to play with that!

I saw an Episcopal Church Meme this week that captures that spirit of eager anticipation and desire for relationship. The man in the meme holds a large placard that proclaims, “The Beginning is Near!” Not the end but the beginning. That meme reflects the rhythm of the liturgical year. During Advent, we anticipate the coming of the Promised One, whose birth each year at Christmas offers us a new beginning.

“The Beginning is Near!” is an announcement we all need to hear right now. A column by psychologist Barton Goldsmith appeared in the Advice section of the December 6th edition of the Grand Rapids Press. Goldsmith began, “The pandemic has caused a secondary epidemic of anxiety and depression among most people … When you think you don’t have a future, you live in the past [with a] woulda, shoulda, coulda mantra looping through your brain and body that is destructive to emotional well-being.” He concludes, “If you are finding it hard to basically function, you must force yourself to move forward … the unspoken benefit of this time in our lives is that it will lead us to new things, and that always brings with it a sense of wonder.”

“Can we play with the Activity Set?” is indeed a wonder-filled question that opens the door to new beginnings. Can we again discover the joy, peace, love, and hope that lies waiting in the manger? Can we engage, day by day and hour by hour, with a God who is ever moving forward, our help in ages past and hope for years to come? Can we go forth for God and with God, sharing that joy, peace, love, and hope with each and every neighbor … including the cats?

“Can we play with the Activity Set?” That is a question each of us should be asking at the close of this Year of our Lord 2020.