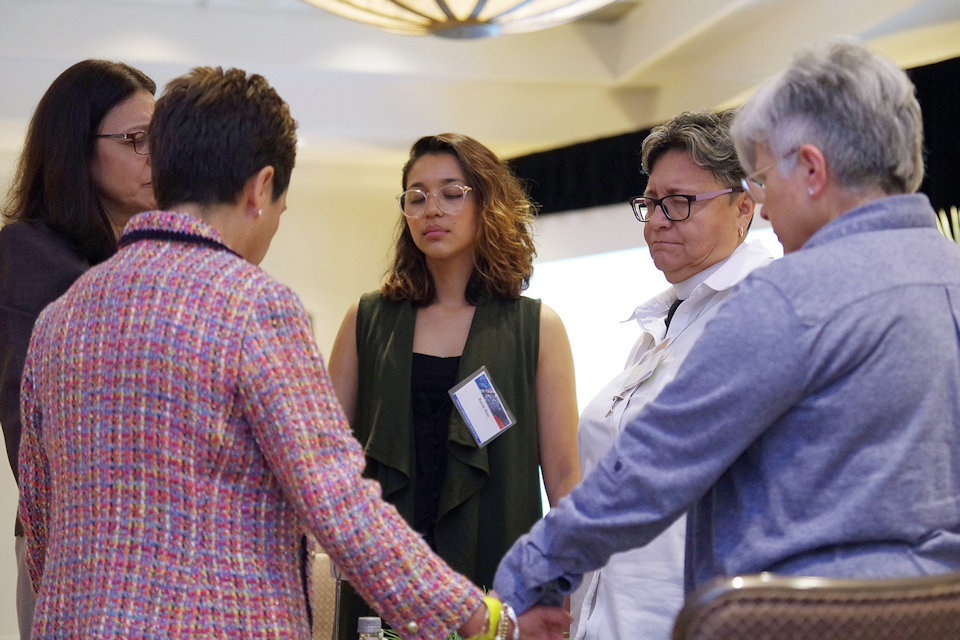 More proposals are reaching the Committee on General Conference adding to three plans from the Commission on A Way Forward.

A new group of United Methodists has formed to champion a “Simple Plan” at the special General Conference in 2019.

If approved, the legislation would open the door to full participation of LGBTQ individuals in the life of the church, said Methodists for the Simple Plan. The proposal eliminates all restrictions in the denomination’s Book of Discipline related to the practice of homosexuality.

So far, 115 United Methodists — including 13 General Conference delegates — have signed on to support the plan.

In a statement released Aug. 28, the unofficial advocacy group insists the three plans proposed in the Commission on a Way Forward report “have significant theological, moral and ecclesiological flaws.”

The United Methodist bishops appointed the commission and subsequently called the special General Conference with the aim of ending the denomination’s long impasse over how to regard homosexuality.

“The Traditionalist Plan expands enforcement of oppression; the Connectional Church Plan resurrects the racist logic of the Central Jurisdiction; and the One Church Plan sanctions segregation regionally,” the statement says of the commission’s proposals.

In contrast, the statement contends, the Simple Plan is grounded in “our experience of God’s blessings in the lives and loves of LGBTQIA+ persons, along with our first General Rule to ‘do no harm.’”

“I pray that delegates receive the statement as a principled and provocative articulation of a ‘still more excellent way,’” said the Rev. Jay Williams, the statement’s lead writer and lead pastor of Union United Methodist Church in Boston. The statement bears the title “Ain’t I a Christian?” — a reference to the famed speech “Ain’t I a Woman?” by the Methodist abolitionist and itinerant preacher Sojourner Truth.

“Hopefully, it invites reflection and sparks conversation that takes seriously the experiences of LGBTQIA+ persons as collaborators in the future of the church, instead of as ‘objects’ of debate,” Williams said.

The Simple Plan is not the only alternative to the commission’s report submitted to the special General Conference on Feb. 23-26 in St. Louis.

In addition to the 48 petitions contained in the commission’s three plans, 61 other petitions are being reviewed to determine the validity of formatting, said the Rev. Gary W. Graves, the secretary of General Conference.

Another 18 petitions have been found to be invalid due to errors in formatting or other requirements, Graves said, but these decisions will be reviewed by the General Conference Committee on Reference.

The same committee will review petitions submitted by any person or group other than the Commission on a Way Forward to determine if they are in harmony with the call to the special session.

United Methodist News Service has reported on all three plans in the Way Forward report and will be covering additional proposals in the run-up to the 2019 special session. The news service also is providing stories as different groups endorse various proposals.

The majority of United Methodist bishops recommended the One Church Plan. The Rev. Mark Holland, a General Conference delegate, has launched an unofficial group Mainstream UMC to champion the plan.

Both the unofficial advocacy group Uniting Methodists and the denomination’s official Hispanic/Latino caucus MARCHA (Methodists Associated Representing the Cause of Hispanic/Latino Americans) also have endorsed the One Church Plan, which allows more freedom at the conference and local church levels with regard to homosexuality.

An unofficial advocacy group, the Africa Initiative, has endorsed the Traditional Plan, which aims to maintain church restrictions against homosexuality and enhance enforcement. The bishops initially called the plan Traditionalist, but the legislation identifies it as Traditional.

The UM Queer Clergy Caucus, an unofficial advocacy group that started in 2016, submitted the eight petitions of the Simple Plan.

However, the group Methodists for the Simple Plan is separate from the caucus and seeks to be a grassroots effort that also attracts laity and people who do not identify as LGBTQ.

The plan shares some similarities with the One Church Plan, which leaves decisions of whether to allow same-gender weddings up to local churches and gay ordination up to annual conferences.

However, the Simple Plan does not include provisions the One Church Plan adds with the aim of protecting freedom of conscience of those who believe the practice of homosexuality is sinful.

The Simple Plan also removes bans on general agencies and annual conferences from using church funds to “promote the acceptance of homosexuality …” The One Church Plan leaves those parts of the Discipline untouched.

At this point, General Conference rules have not been finalized for how the plans will be presented to delegates. But unlike U.S. elections for candidates or state initiatives, General Conference voters will not simply face a ballot and mark whichever plan they support. Instead, they will be able to refine petitions and possibly mix together provisions of multiple plans.

“We suspect that it was going to be about discerning and trying to perfect whichever plan that is first presented to the body, or voting it down if there is not room for improvement,” said the Rev. Alexandre da Silva Souto, one of the plan’s submitters and a General Conference delegate from the New York Conference.

He hopes delegates will work on perfecting the Simple Plan.

The Rev. Anna K. Blaedel, a supporter of the Simple Plan who identifies as queer, said they want “no more crumbs” from the denomination they serve. The campus minister at the University of Iowa Wesley Center has faced three formal complaints under church law since identifying as “a self-avowed practicing homosexual” at the 2016 Iowa Annual Conference.

Blaedel and other Simple Plan supporters criticize the idea of pursuing church unity at all costs. Williams said he doesn’t want a false unity but one based on integrity.

However, other plan supporters stress that that they aren’t ready to pack it in on the denomination where they seek to live out their Christian faith.

“While we LGBTQ persons are often asked why not just leave the denomination, it is important that your readership understand that we have absolutely no plan to leave The United Methodist Church,” said the Rev. Pamela R. Lightsey, a United Methodist elder and vice president at Meadville Lombard Theological School in Chicago.

“Our intention is to help it be what it professes to be in its Social Principles. We are committed to that vision and intend to show up at GC2019 undeterred by years of bigotry.”