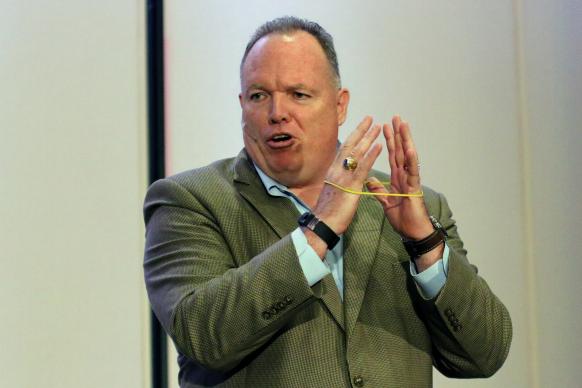 The Rev. Jeff Greenway, lead pastor of Reynoldsburg United Methodist Church in Ohio, speaks during the morning session of the Wesleyan Covenant Association's inaugural meeting in Chicago. He is among the leaders elected to the new group's council. ~photo courtesy Good News/Steve Beard

With some 1,800 people in attendance, the new Wesleyan Covenant Association officially launched Oct. 7.

The Wesley Covenant Association has declared its intention to lead Methodism in a more evangelical direction.

Organizers announced their hope is to do this work within The United Methodist Church, while leaving open the possibility of moving outside it.

Chief among their concerns are growing challenges to the denomination’s bans on same-gender unions and the ordination of “self-avowed practicing” gay clergy.

“We believe that we are planting seeds today that when full-grown will bear fruit of a vital Wesleyan witness and dynamic, spirit-filled Methodism around the globe,” said the Rev. Jeff Greenway, lead pastor of Reynoldsburg United Methodist Church near Columbus, Ohio. He also is one of the leaders of the new group.

Since 1972, the Book of Discipline — the denomination’s book of law and teachings — had said that all individuals are of sacred worth but the practice of homosexuality “is incompatible with Christian teaching.”

The new Wesleyan Covenant Association holds the church’s teaching on homosexuality to be essential to biblical orthodoxy.

The denomination has long been home to a number of unofficial advocacy groups — some working to change church restrictions related to LGBTQ individuals and others working to the hold the line.

What differentiates the Wesleyan Covenant Association from other similar affinity groups is that rather than relying on donations, it charges membership fees. For individual lay and clergy members, the membership fee is $100 per year. For congregations that join, the cost is $1.50 per member per year. In cases of financial hardship, these fees may be reduced.

Association members also must commit to a statement of faith and moral principles and declare a willingness to cooperate in ministry through the association.

The Rev. Ryan Barnett, senior pastor of First United Methodist Church in Kerrville, Texas, was among the speakers urging participants to join.

“By joining the WCA,” he said, “you will send a clear message that no matter what happens next in The United Methodist Church, we will walk forward together with brothers and sisters near and far who are committed to the Wesleyan expression of the Christian faith.”

Nearly 1,000 individuals or churches had signed up as members by the end of the meeting and organizers ran out of membership forms.

The new association is forming just as the denomination’s longtime debate about homosexuality appears to be reaching a turning point.

“For the first time in our denomination’s history, pretty much everyone agrees that change is coming,” Barnett said.

In recent months, 111 United Methodist clergy and candidates have come out as gay. The New York Conference has ordained or commissioned four openly gay clergy. Five other conferences and two jurisdictions have passed resolutions urging noncompliance with church prohibitions related to homosexuality. The Western Jurisdiction has elected and consecrated Bishop Karen Oliveto, who is openly gay and married to a deaconess.

Meanwhile, the bishops are forming The Commission on The Way Forward, charged with reviewing and possibly recommending changes to church teachings on homosexuality and working toward church unity.

Greenway used the image of a stretching rubber band to describe the tension between progressivism and traditionalism that he sees happening in The United Methodist Church.

“The band of this denomination we call United Methodist is so stretched and strained that it’s very difficult even to recognize,” he said. “Most of us in this room are here holding onto the stake that’s been in placed in the ground of historic, orthodox, evangelical, Wesleyan Christianity.”

On the other end of the band, he said, are United Methodists with whom he and other evangelicals hold “increasingly little in common.”

“We read the same Bible; we pledge to support and hold the same Discipline; we even quote the same (John) Wesley sermons; but we’re talking about a different expression of faith,” he said.

Those in attendance worshipped, recited the Nicene Creed and took Holy Communion together, with Bishop Mike Lowry and retired Bishop Robert Hayes Jr. officiating. They heard presentations on ministry with the poor and building Christian community.

Most also stood or said “Amen” together to affirm organizers’ plans for the group, including electing its initial 22-member leadership council. The packed schedule allowed no time for questions or discussion.

With a boom of “Amens,” those assembled also approved a statement addressed to the still-being-formed bishops’ commission.

That statement calls on the commission to develop a recommendation “that would definitively resolve our debate over The United Methodist Church’s sexual ethics and its understanding of marriage.” It also calls for a special meeting of the denomination’s top lawmaking assembly, General Conference, in 2018 to take up that recommendation.

The Rev. Margie Bryce, a pastor in the Detroit Conference, said she was at the gathering because she wanted to hear for herself about the group. She said she sees the group’s statement to the commission as simply “a call to play by the rules.”

The Rev. Forbes Matonga of Zimbabwe said much of what he heard excited him.

“What they stand for resonates with what I stand for,” he said. “We don’t compromise God’s standards to meet our standards.”

However, the gathering also drew people who came simply to observe and not to join. Among them were two district superintendents on Bishop Oliveto’s cabinet in the Rocky Mountain Conference.

The Rev. Paul J. Kottke, Metro District superintendent in the Denver area, sees the practice of homosexuality as in line with Scripture and historic teaching. He also is excited to work with Oliveto.

“Will the church split? I hope not,” he said. “I think our task in the 21st century is to hold the tension of who we are as a global denomination.”

Lonnie Chafin, treasurer of the Northern Illinois Conference, was also at the gathering as an observer.

“It’s hard to see why there’s a need for separation,” he said. “Everything the presentations celebrated happened within The United Methodist Church.”

The Rev. Rob Renfroe, a leader of the new association, told those assembled to applause that they are building something “that will outlive everyone of us in this room.”

“There is a new day coming,” he said.