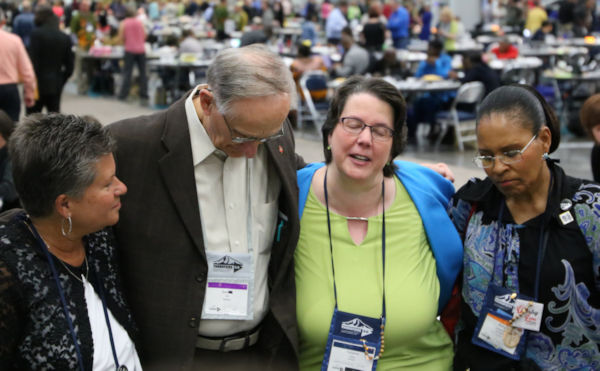 L-r: Nichea Ver Veer Guy, Bishop Donald Ott, Rev. Melanie Carey, and Ruby Anderson pause for a moment of prayer along with the Michigan Area delegates as they prepare for a significant day of legislation at the 2016 General Conference in Portland. ~mic photo/Mark Doyal

Michigan’s delegates to the 2016 General Conference will go to St. Louis in February, 2019.

Those delegates arrived in Portland, Oregon for duty May 10-20, 2016. That was expected. However, on May 18th the General Conference “hit the pause button” in the words of Joey Butler of the United Methodist News Service. Butler reported:

Late afternoon May 18, delegates voted to accept the recommendation of the Council of Bishops to delay a debate on homosexuality at this gathering of the denomination’s top legislative assembly and let a proposed commission study church regulations … Now the newly created body will study every paragraph in the Book of Discipline related to human sexuality and possibly recommend revisions … The bishops also suggested they might call a special General Conference in 2018 or 2019 to deal with such proposals.

Boayue noted: “The actions of our Annual Conference is consistent with the intent of the Book of Discipline that delegates are elected to serve a full quadrennium.” He went on to say that he felt it would not have been a wise decision to act on the option to elect and send others. “These persons are fulfilling their four-year responsibility,” he said, “and they were among delegates who authorized the forming of the Commission. This provides continuity and consistency on an important issue of our time.”

Charles added, “If past practice holds, I will summon the Detroit Conference delegates to come together once the report is released and after they have had a chance to review it.” At this time the release date of the report from the Council of Bishops is uncertain. However, Boayue said, “We anticipate receiving the report in a timeframe that allows our delegates to act with due diligence.” He asks the Michigan Area to continue to pray. “The Church has seen schisms and engaged in major theological debates before,” Charles observed. “This will not be the first or the last time. But God’s is active in history before, during and after the General Conference and we must rely on the truth that the whole world is in God’s hands.”

Nichea Guy reported that delegates have received the book published by the General Board of Higher Education and Ministry, Unity of the Church and Human Sexuality. “All delegates are asked to read up in preparation for our time together in February.” Click here for more about the book and a study guide that facilitates its use in small group settings.

Guy also noted that delegates are being encouraged to consider their role upon return to their home conferences. “We go to St. Louis as delegates,” she said, “but we should then be ready to engage others around the results of the process.” She also shared a reminder that the 2019 General Conference takes place only 3-4 months before most annual conferences will be electing the delegates who will take the next steps forward at the 2020 General Conference in Minneapolis.

It is yet to be determined how any from the present delegations will travel to St. Louis. The practices of the West Michigan and Detroit conferences differ in terms of the number of alternates who attend General Conference. The West Michigan Conference has one lay and one clergy on the floor voting at any given time; Detroit Conference has three lay and three clergy. West Michigan will adjust its representation in light of the election of its clergy delegate, Rev. Laurie Haller, to the episcopacy.

Nichea believes that the more conversation the better and looks forward to listening sessions that Bishop Bard will schedule this fall. “Both Kennetha Bigham-Tsai and I want to hear from people. As delegates, we vote our own conscience, but we want the people of West Michigan to know that I want to express their views during the dialogue in St. Louis as well.”

MIConnect will continue to publish updates on the work of the Commission on a Way Forward and news from the Council of Bishops regarding the called session as they become available.