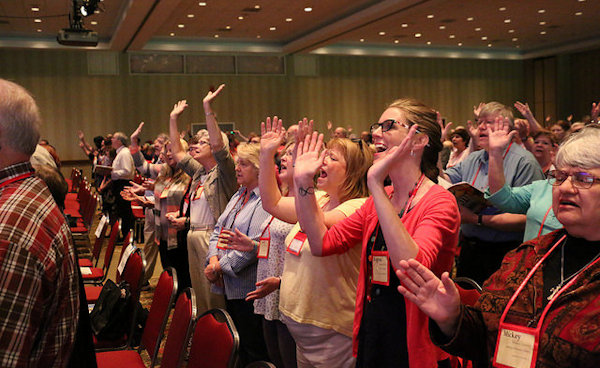 When the 2017 Annual Conference opened on Thursday, Bishop David Bard looked over the crowd and said, "This is the first time I get to stand before all of you gathered in one place together. And you're all looking pretty good!" The beauty of the members continued through four days of worship, voting and learning. ~mic photo/Hannah Hazen

The Detroit and West Michigan conferences move closer to union on January 1, 2019.

ACME, Mich. — New location. New bishop. New Conference on the horizon. The Michigan Annual Conference promised to make history and it did during its session in Acme, Michigan, June 1-4, 2017.On Thursday, June 1, Bishop David A. Bard presided over his first Annual Conference business session since his appointment to the Michigan Area last July in Peoria, IL.As soon as the session was “organized,” the bishop welcomed Design Team Co-Chair, Rev. Marsha Woolley, to the microphone. Her report began, “We have come to believe we are, indeed, better together.” She and colleague, Rev. Dr. Glenn Wagner, summarized the vision, model, and focus of the plan coming to the Conference for approval. Then Woolley concluded, “At a time when it seems more comfortable to maintain the status quo, we choose to do a new thing.”

Two years of meetings and many listening sessions around the state separated her moment at the podium from the moment the new Michigan Conference was conceived two years ago. On “Count Day,” June 10, 2015, announcement was made: “The vote is Detroit Conference 718 yes and 75 no; West Michigan 551 yes and 83 no. We have discerned that now is the time for our two annual conferences to become one!”

No longer are decisions being made by two annual conferences separated by several days and many miles. As in 2016, the Detroit and West Michigan Annual Conferences met at the same site this year. Unlike 2016, members came together for a common experience separated only by the color of their voting cards. And when those cards were raised at 7:45 pm Saturday evening, June 3, the promise made two years ago was sealed. A Plan of Organization, with no amendments, had been adopted that will enable the Design Team, Full Cabinet, Committees on Nomination and others to take next steps toward union as the Michigan Conference come January 1, 2019.

A comment before the vote by the Rev. Kenneth Bigham-Tsai, summed up the mood of the house: “We have ways to give the Design Team feedback over the next year. This 38-page Plan of Organization has been worked on a worked on and worked on. Let’s approve this today so that we have our new annual conference and can move on with all necessary details. The purpose of this plan is to get ministry off the top of the hierarchy into the grassroots.”

Other major legislation also focused on Design Team proposals: 1) adoption of the Nine-District Recommendation; 2) approval for creation of a Legal and Financial Task Force to take next steps in the implementation of the Nine-District Plan; and 3) adoption of a comprehensive 9-point Pension and Health Benefits package for the new Michigan Conference.

Social Action items were few this year by request of Conference planners. The Detroit Conference affirmed the biblical call to be peacemakers, including restriction of first-use of nuclear weapons. Two other Detroit Conference items, calling for clergy adherence to the Book of Discipline regarding matters of human sexuality, were defeated.

Significant time was spent on Saturday discussing and voting on five amendments to the Constitution of The United Methodist Church coming from the 2016 General Conference. Items were presented by Rev. Dr. Charles Boayue (Detroit) and Nichea Ver Veer Guy (West Michigan), chairpersons of Michigan’s General Conference delegations. Following questions and debate, clergy and lay members in full connection voted on the amendments by written ballot.

The focus of the five amendments:
1.    Gender Equality: declares men and women are of equal value in the eyes of God;
2.    Inclusion in Membership: amends Par. 4 to add gender, ability, age, and marital status to list of characteristics that do not bar people from membership;
3.    Delegate Elections: requires open nominations from the floor of annual conference for election of delegates to General, Jurisdictional and Central Conferences;
4.    Election of Central Conference Bishops: must be elected at a regular, not an extra, session unless an unexpected vacancy occurs;
5.    Bishop Accountability: provides for Council of Bishops to hold individual bishops accountable. Currently, complaints are handled in the region where a bishop is elected.

Click here for a more detailed account of the eight hours spent in legislative action at the 2017 Annual Conference. The full details of the Design Team proposals and all other legislative items may be read here.

Over the past several years, the learning segment of annual conference has become a precious and exciting time for many members. This year the Rev. Susan Beaumont took her place in the list of guest teachers that also includes the Rev. Lovett Weems, Jr., Rev. Adam Hamilton, Rev. Jorge Acevedo, and Marcia McFee. A native of Troy, Michigan, Beaumont, a former senior consultant for Alban Institute, began, “This feels like being home.”

In her first session, “Leading in a Liminal Season,” she defined “liminality” as “an era which finds us neither here nor there, between a known past and a questionable future.” She noted that such a mood not only describes Michigan’s two annual conferences but the United Methodist denomination and the national and global arenas as well. She described the leadership style required for such a time as this: “Leading with presence requires three shifts in stance: from knowing to unknowing; from advocating to attending; and from striving to surrender.”

“Tending the Soul of the Institution” was the focus of Beaumont’s second session. Acknowledging the importance of standing still to let the Holy Spirit work through us, she added, “If you only stand and wonder, you don’t last very long.” She described the “divine spark” within a congregation or a conference as “the truest self of that institution.” Deepening discernment, shaping memory, clarifying vocation, and engaging emergence were cited as ways to live through unsettled times. “In the gap between the old-world order and the emergence of the new world order, we are freest to discover new direction. Innovation will occur if we allow and support the natural unfolding of emergence.”

Summaries of Susan Beaumont’s two sessions, including links to videos may be found here.

Conference members also found spiritual grounding in daily worship. Conference preachers—Bishop David Bard, Rev. Eric Mulanda, and Rev. Zack Dunlap—offered insight and inspiration around a common theme … Christ’s feeding of the multitude. “We are hearing an abundance of sermons on abundance,” Dunlap quipped on Saturday as he took to the pulpit for the third in the series. Click here for a feature that provides sermon summaries and links to full manuscripts.

“The Michigan Conference equips and connects through Christ-centered: Mission & Ministry; Bold & Effective Leaders; Vibrant Congregations.” While the new Michigan Conference is yet to be born, members got a foretaste of that vision on Friday afternoon.

Under the banner, “Bold & Effective Leaders,” the Rev. Karl Ziegler, retired Detroit Conference clergy, reported on the Michigan Area Haiti Task Force’s sponsorship of a Local Preachers Academy in Haiti. The effort emerged out of the Covenant Renewal process in 2015. With the help of 15 elders from Michigan, 115 Local Preachers were accredited during the February 4, 2017 Bicentennial of The Methodist Church in Haiti celebrated in Port Au Prince. “These 115 persons can now administer the sacraments alongside the 15 ordained elders who serve in Haiti.” Ziegler thanked the Area for $75,000 of support for the effort.

Two other bold and effective leaders were recognized earlier in the session. Conference Treasurer David Dobbs announced the recipients of the John Buxton Award. Given annually to recognize creative leadership. Detroit Conference Deacon Paul Perez was named for his service as founding Director of Justice For Our Neighbors Southeastern Michigan and for ministry done in his present role as Director of Mission & Justice Engagement and Leadership Recruitment. The Rev. Faith Green Timmons, pastor of Flint: Bethel UMC was honored for “turning the church into a beacon” during the water crisis and recovery in the city. John Buxton was a layman who was instrumental in strengthening the pension program of the Detroit Conference. His wife, Sue, serves as the Conference Facilitator.

The spokesman for “Vibrant Congregations” was the Rev. Dirk Elliott, Director of New Church Development for the Michigan Area. “The 2016 General Conference announced an effort to make 1 million new disciples over the next four years,” Elliott reported. “Translating that to the Michigan Area, our goal is to start 13 new churches, 127 faith communities and 1,260 small groups during this quadrennium.” He lifted up several recent “adoption” stories—Potterville is now a Sycamore Creek campus; Bay City 1st and Bay City Christ are now Bay City Grace; South Wyoming is one of the several multi-sites of Cornerstone Church. The Rev. Jeremy Wicks was introduced as the planting pastor for a new church in Traverse City.

Bold and Effective Leaders and Vibrant Congregations were at the center again on Sunday as the morning worship experience wrapped around the Cabinet Report shared by Dean Elbert Dulworth. “The 2012 General Conference declared that District Superintendents are expected to be chief missional strategists for their district,” Dulworth said. “That task is not always easy. On some days it is easier to feel like a fire chief than a chief missional strategist.” He then added. “We must figure out what fires we just might have to let burn. For new growth can be possible after a controlled burn.”

The Cabinet Dean celebrated the joint working of the Area Cabinet, that made 120 new appointments for 2017-2018. By working together, “we are setting an example of what one conference can be like.” The full text of Rev. Dulworth’s remarks will be published in the June 14 edition of MIConnect.

Members learned they have a Cabinet Choir as the Bishops and District Superintendents serenaded those to be ordained later in the day with the hymn, “You Are the Seed.” The Bishop said goodbye to Rev. Tamara Williams (Albion District) and the Rev. Elbert Dulworth (Marquette District). He then welcomed Rev. Dale Miller (Albion) and the Rev. Scott Harmon (Marquette). It was announced that the Rev. Bill Haggard will serve as Dean of the Cabinet starting July 1, 2017.

On Sunday morning, the Rev. Gary Step, Area Director of Congregational Excellence announced that Manistee and Flint: Calvary UMCs were recipients of 2016 “One Matters Awards.” Discipleship Ministries confers this recognition to churches that “turn zeros into positive numbers” with baptisms and professions of faith. Learn more about those Vision Keepers here.

On Sunday afternoon Bishop David Bard ordained and commissioned new leaders, telling them, “You have answered the call not because it’s easy, but because it’s hard.”  He offered words of encouragement: Take care of yourself … Know you are not alone … and, Never forget your calling. See full text here.

Earlier in the week, a symbolic mantle was passed from the 33 retiring pastors, representing 853 years of combined service, to these new leaders.

~For a full photo album go to Flickr/Michigan Area.