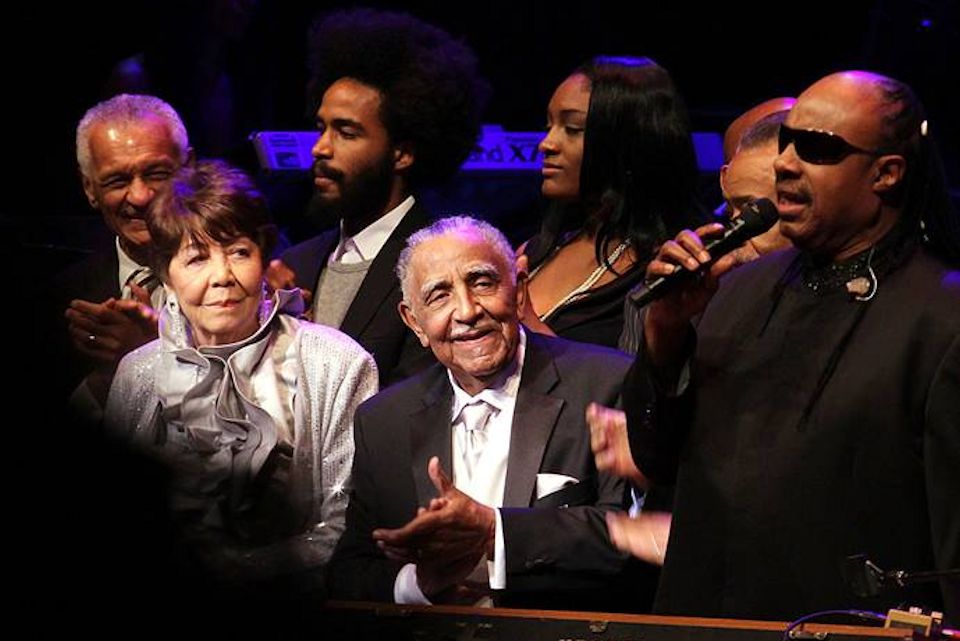 The Rev. Joseph E. Lowery (center) celebrates his 90th birthday with a song from entertainer Stevie Wonder (right) at the Atlanta Symphony Hall in October 2011. Beside Lowery is his wife Evelyn, who died in 2013. Joseph Lowery died March 27. He was 98. ~ UM News file photo/Kathleen Barry

“While Rev. Joseph Lowery was an important figure in the Civil Rights Movement, it may be less well known that his greatest love was being a pastor,” said Bishop Woodie W. White.

The Rev. Joseph Echols Lowery, a United Methodist pastor who loved to preach and was never afraid to speak truth to power, died at his home in Atlanta on March 27. He was 98.

Lowery walked with the Rev. Martin Luther King Jr. and gave the benediction at President Barak Obama’s first inauguration. Obama also presented him the Presidential Medal of Freedom in 2009.

“While Rev. Joseph Lowery was, without question, an important figure in the Civil Rights Movement, it may be less well known by many that his greatest love was being a pastor,” said retired Bishop Woodie W. White.

White and Lowery were close friends and he spoke fondly of a man he greatly admired and loved.

Lowery’s famous sense of humor was one of his greatest gifts, White said. “He could make people laugh while delivering an important message. He always treated people with respect,” White said.

Laughing, White said, “I told him, Joe, be nice.” Lowery replied that he had written a poem about the couple being reunited in heaven.”

But he also took advantage of the opportunity to criticize President George W. Bush who was just a few feet away.

Lowery was one of The United Methodist Church’s greatest assets, said the Rev. Gilbert H. Caldwell. “I don’t think we appreciated him as much as we should have. He was a civil rights icon.”

The Rev. William B. McClain spoke of how Lowery inspired him.

“Joe’s ministry was my model for my own ministry: to see the ministry as a combination of the prophetic and the evangelical, the gospel of grace and the gospel of social justice. I tried to do that throughout my pastorates,” said McClain, Mary Elizabeth Professor Emeritus, Preaching and Worship at Wesley Theological Seminary.

McClain, co-author of “Songs of Zion,” said it was Lowery who encouraged him to write the book and taught him to appreciate the hymns of the church, especially the Negro spirituals.

“Yes, Joseph Echols Lowery was a special Methodist preacher. A true giant of the faith and a voice for social justice and the Gospel dictated by the One who came anointed to bring liberation to the disinherited.”  ~ Rev. William B. McClain

“Yes, Joseph Echols Lowery was a special Methodist preacher. A true giant of the faith and a voice for social justice and the Gospel dictated by the One who came anointed to bring liberation to the disinherited,” McClain said.

On his 90th birthday, the Joseph and Evelyn Lowery Institute for Justice and Human Rights held a star-studded birthday celebration for Lowery, which included Stevie Wonder, Cicely Tyson, and the Blind Boys of Alabama, among others.

In a birthday letter, President Obama called Lowery “a giant of the Moses generation.”

“Your remarkable career has challenged our nation to realize its founding promise, and your leadership has taught Americans of all races that no dream is too big and no future is out of reach,” Obama wrote.

Lowery was called the dean of the civil rights movement by the NAACP and named one of the country’s 15 greatest black preachers by Ebony Magazine.

The National Council of Churches released a statement of gratitude for his life and service.

He got involved in civil rights work in the early 1950s. Lowery and King formed the Southern Christian Leadership Conference in 1957.

In 1965, King asked Lowery to chair the delegation delivering the demands of the Selma-to-Montgomery March to Alabama Governor George Wallace. Wallace ordered state troopers to stop the marchers by whatever means necessary. When marchers were tear-gassed and beaten, the day became known as “Bloody Sunday.”

In 1995, Lowery led the 30th-anniversary re-enactment of the historic march and Wallace personally apologized for his conduct as governor.

Lowery was born in Huntsville, Alabama, on Oct. 6, 1921. He married Evelyn Gibson Lowery in 1950. She died in 2013. He is survived by three daughters and two sons from an earlier marriage to Agnes Moore.

He served churches in Birmingham, and Mobile, Alabama, and in Atlanta.

Lowery’s family wrote, “Our entire family is humbled and blessed by the overwhelming outpouring of love and support that has come from around the globe. We thank you for loving our father, Dr. Joseph E. Lowery, and for your continuous prayers during this time.”

In lieu of flowers, cards or food, the family requests donations be made to The Joseph & Evelyn Lowery Institute for Justice & Human Rights at P.O. Box 92801, Atlanta, GA 30314, or by donating online.

Aligning with the Centers for Disease Control and Prevention’s guidelines on COVID-19 prevention and social distancing, plans are underway for a private family service. A public memorial will be held in late summer or early fall.

Lowery compiled a collection of his sermons, speeches, and remarks in the book, “Singing the Lord’s Song in a Strange Land,” in 2011.

“Singing the Lord’s song in a strange land is how I have tried to exist and serve,” he wrote in the introduction. “It is not just music. It is my witness. It’s my truth to power. That’s how I’d like to be remembered.

“I hope I kept the voice of moral force and ethical power to a decibel level that it was heard in the corridors of power.”