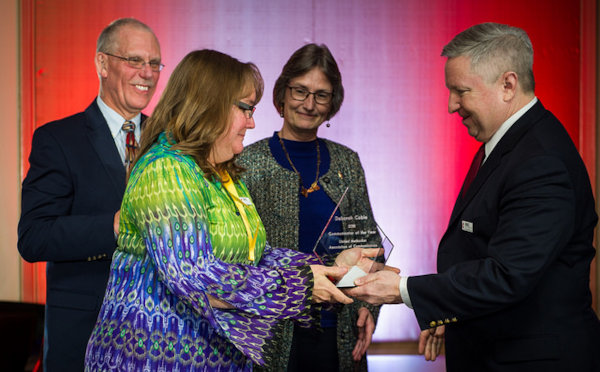 The United Methodist Association of Communicators (UMAC) Awards were announced March 9 in Philadelphia.

March 9, 2018 | PHILADELPHIA—The United Methodist Association of Communicators held their annual gathering March 7-9, 2018, at the Westin Hotel in downtown Philadelphia. As in years past, the event came to a spirited close with the awards celebration Friday evening.

The theme for 2018—Embrace Change—was reflected in work submitted across 10 classes of communications as well as in witness shared by the 2018 Hall of Fame inductee, Wayne Rhodes, and Communicator of the Year, Deborah Coble.

The evening began in good Philadelphia tradition as mummers the Avalon String Band marched into the banquet hall. The Mummers Parade is held on New Year’s Day and is believed to be the oldest folk festival in the United States. The musicians provided a feast for eyes and ears.

Best in Class winners are as follows:

UMAC chair Mark Doyal (Michigan) came to the microphone to announce that the Communicators Hall of Fame inductee for 2018 is Wayne Rhodes. Rhodes served for two decades in The United Methodist Church as an educator and advocate for peace with justice. He was an able voice for both The United Methodist Social Principles and The Advance in service to two general agencies, Global Ministries and Church and Society.

“Wayne’s vast experience, good judgment and calm manner were just what we needed as we worked in the whirlwind of issues of justice and peace on Capitol Hill,” said James Winkler in a letter read by Doyal. Winkler, now president of the National Council of Churches, was General Secretary of Church and Society during much of Rhodes’ tenure with the agency.

Stepping to the podium, Rhodes challenged his colleagues in storytelling. “These are trying times and you are at the forefront of these trying times,” he reflected. “Jesus told us to go and communicate. You can never back away from communicating that message.” Read more about hall of fame inductee Wayne Rhodes.

The final highlight of the evening came as Doyal brought Bishop Sandra Steiner Ball to the stage. “West Virginia was devastated by floods in June 2016 in areas where people already lived below the poverty level with few resources,” Steiner Ball began in her introduction of the 2018 Communicator of the Year, Deborah Coble.

Ten days before Deborah Coble was officially hired as director of communications for the West Virginia Conference, she was already on the disaster scene. “Our new communicator came in and gave people hope,” the bishop recalled. “She took pictures. She wrapped her arms around people. She gave a smile.” And she helped tell stories that “resulted in over $2 million in contributions from across the connection.” The bishop also cited projects addressing membership to discipleship and opioid addiction as among Coble’s achievements.

Coble came forward to accept the award calling her volunteer team of communicators to join her on the platform. “I was a TV marketing and promo gal until God took a 2 x 4 and said, ‘I want you as a pastor.’ I believed there was a way to merge those two together,” Coble remarked. A pastor in Iowa before arriving in West Virginia, Coble adopted a spiritual development model when organizing the team of communicators. Read more about 2018 Communicator of the Year Deborah Coble.

Doyal closed the 2018 UMAC gathering with a reminder that the organization would hold their next get together in St. Louis, Missouri, in conjunction with the Special Called Session of the 2019 General Conference of The United Methodist Church in February.