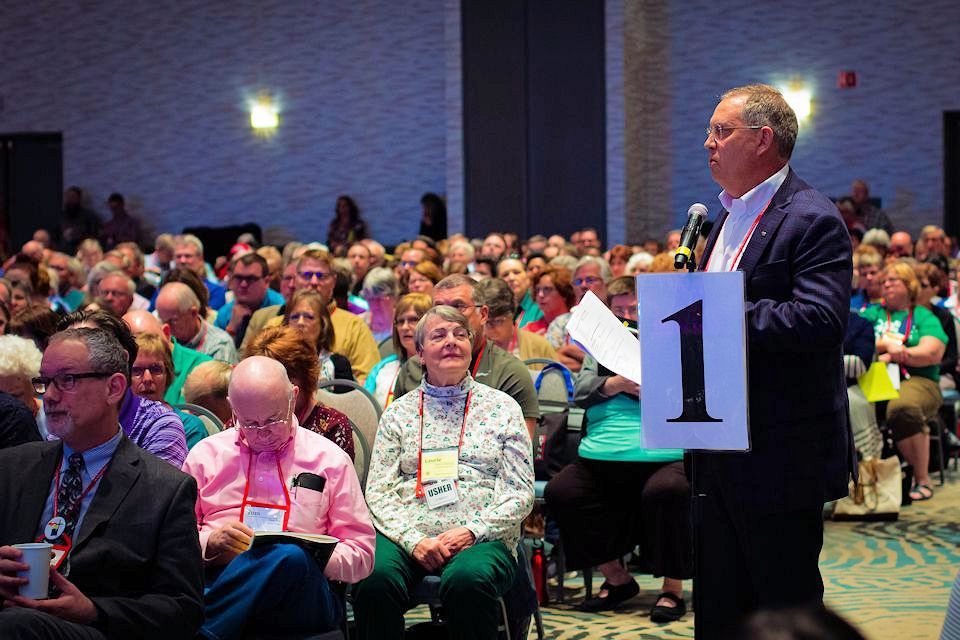 The Rev. Benton Heisler, shown at the microphone of the 2019 Michigan Annual Conference, has served as Director of Connectional Ministries for the past 12 years. ~ mic photo/Jonathan Trites

After 12 years of service as the Director of Connectional Ministry, the Rev. Benton Heisler will retire at the end of 2020. Bishop David Bard has appointed the Rev. Paul Perez as the new DCM in Michigan.

August 17, 2020 | LANSING MI —  The Rev. Benton R. Heisler has announced he will be retiring as the Director of Connectional Ministry of The Michigan Conference, effective December 31, 2020.  Following the announcement, Bishop David Bard appointed the Rev. Paul Perez to serve in the role of Director of Connectional Ministry (DCM) beginning January 1, 2021.

For the past 12 years, nine years in the former West Michigan Conference and three in the new Michigan Conference, Benton Heisler served as Director of Connectional Ministry. He was an essential voice in the establishment of the new Michigan Conference. Previously, Heisler was the Lansing District Superintendent for over six years and served five congregations in four appointments since 1986, St. Joseph, Charlevoix/Greensky Hill, Lansing Asbury, and Mt. Pleasant First. He also served the denomination in a variety of contexts across the Conference and North Central Jurisdiction. Heisler led and or participated in six General/Jurisdictional delegations. He served on the Jurisdictional Committee on the Episcopacy and Jurisdictional Committee on Appeals as well as numerous Conference task forces and boards.

“I believe my retirement opens a door for new leadership, younger leadership, and more diverse leadership and an opportunity for the Michigan Conference to thrive in new directions.” Heisler said, “It has been a blessing to have served the conference and congregations across these past 35 plus years of ministry. I look forward to what God holds in store for us all as we journey daily, trusting in God’s grace and guidance.”

Bishop Bard expressed gratitude for Benton’s faithful service. Bard said, “He has consistently articulated a vision, expectation, and goal that every local congregation be passionately committed to a relationship with Jesus Christ, and desire to build, repair, and restore people and places of community.” He added, “I have deeply appreciated Benton’s deep faith, his commitment to the Michigan Conference, his willingness to entertain new ideas, his amazing attention to detail, and his willingness to listen and think together with me.”

The incoming Director of Connectional Ministry, Paul Perez, is an active Deacon in Full Connection, who has served the Michigan Conference as the Associate Director for Mission and Ministry for the past three years, leading the conference EngageMI mission program.  Previously, Perez served as the Director for Mission and Justice Engagement, and Leadership Recruitment in the former Detroit Annual Conference. From 2008-2013 he was the  Executive Director of Justice for Our Neighbors Southeastern Michigan and a Deacon at Livonia Newburg United Methodist Church. Paul was elected by The Michigan Conference as a delegate to the 2020 General Conference. He was a Detroit Conference delegate in 2004. Perez currently serves as a director/board member of the General Board of Church and Society.

“I am very pleased that Paul has agreed to be appointed as the next Director of Connectional Ministries,” said Bishop Bard. “He brings tremendous gifts to this position. He has worked with many of our conference staff. He knows the conference well, both its structure and its heart. He has served on boards of United Methodist general agencies. Paul combines these gifts with his deep faith in Jesus Christ and a passion for seeing that faith lived out in ministries of justice, healing, reconciliation, and love.

“I look forward to working more closely with Paul in his new role in the Michigan Conference,” Bard concluded.