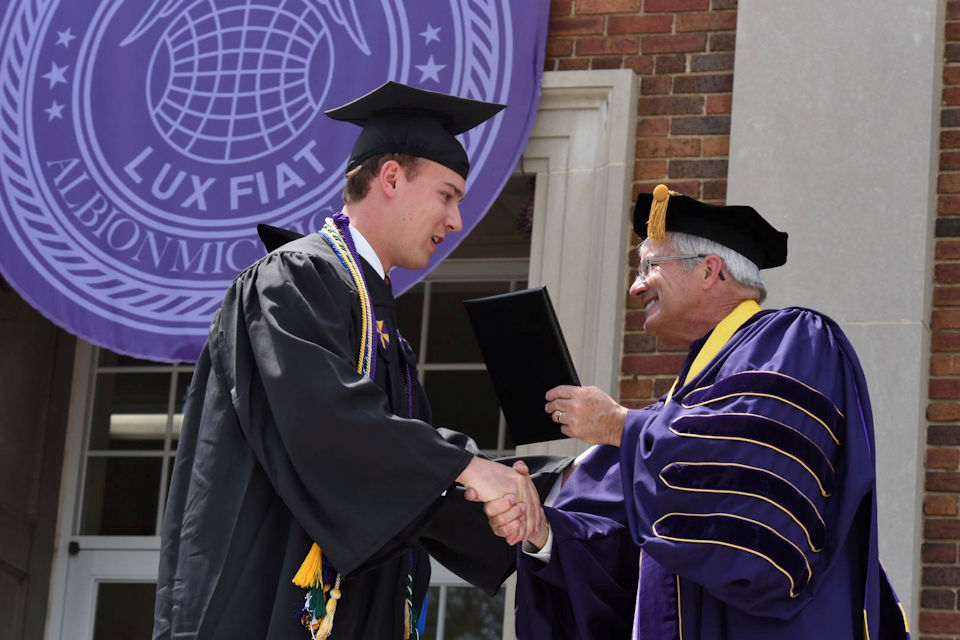 Dr. Mauri Ditzler, president of Albion College, has spent six years connecting the school with the community and The UMC.

“When I arrived at Albion in 2014,” says Dr. Mauri Ditzler, “I shared my belief that Albion—the college and the town—was filled with people who give us reason to hope.” This spring, as he completes his tenure as the President of Albion College, he still radiates a hopeful vision for the college and the community.

At the beginning of his time in Albion, President Ditzler identified hope in people as the foundation for the audacious goals they set for the college and the community. It was a vision shared by the Trustees, faculty, staff, and students of the college. A couple of those audacious goals which he celebrates today are the expansion and strengthening of the academic program, the creation of new initiatives aimed at first-generation and under-represented students, and efforts to increase enrollment and enhanced diversity in the life of the school. The college successfully completed its first comprehensive capital campaign in ten years which will exceed $100 million to fund new programs, capital projects, and scholarships.

One of the challenges for Albion College has been the health of the Albion community beyond the campus. Under President Ditzler’s leadership, the college partnered with the city in the redevelopment of the downtown, resulting in a new hotel, restaurants and shops and new
jobs for the community. This town-and-gown partnership is bringing new
life to the city as well as the campus.

Bishop David Bard, Bishop of the Michigan Conference, summarized President Ditzler’s leadership when he said, “President Ditzler has served Albion College tremendously well. He has done a remarkable job of connecting the college to the community. At the same time, he has been very conscientious in strengthening the relationship between Albion and the Michigan Conference. His leadership has renewed the ties between Albion and The United Methodist Church, and I am very grateful for that.”

In reflecting on his life and career, President Ditzler goes back to his childhood, growing up on a typical Midwest farm where he learned to love working the land. He met his wife Judi in his Sunday School class, the second love of his life. And when he was a student at Wabash College, he discovered his third love—liberal arts education–where he has spent the last 49 years. He says, “Some people never find a great love in their life, and I’ve been fortunate to find three.”

Rev. Stephen Charnley, representing the Michigan Conference on the Board of Trustees, says, “Mauri has the heart of a pastor and a deep spirituality as evidenced by his caring for students. He has led in the church’s desire for equality with his vision that the campus would look more like America in its diversity.”

Anticipating his retirement, President Ditzler wrote, “I’m reminded of one of my favorite Bible stories about Moses leading the Israelites out of Egypt. Moses did not complete the journey into the Promised Land. He got close enough to be able to see it, but Joshua led them there. After retirement, I will be watching with joy as the next President continues the journey and helps the college reach its goals. I have loved my time at Albion. For me, the joy has been in the journey.”

With his hopeful spirit, President Ditzler has helped Albion College and community to envision a new “promised land” and to move toward the future. He plans to return to his farm in Indiana and his first love—farming– but he intends to continue to serve as an ambassador for the college he has grown to love.

The Rev. Dr. Faith Fowler, an Albion alum and member of the Board of Trustees admits, “Replacing President Ditzler will be challenging. He is a natural leader and he understands that higher education will never be the same. We are grateful for the transformative impact he has had.”

—Rev. Dr. John E. Harnish is a retired clergy member of the Michigan Conference.  For seven years, he served as the Associate General Secretary with the General Board of Higher Education and Ministry and is currently a Trustee at Adrian College.