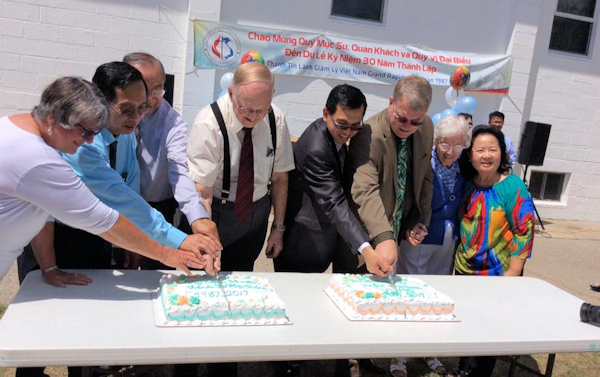 History was made in 1987 when a Vietnamese congregation that had been worshiping in Grand Rapids for five years became an official part of the West Michigan Conference family. It was the first Vietnamese United Methodist Church chartered anywhere in the world.

On Sunday, July 30, 2017, 280 Vietnamese clergy and their families from around the world were present in Grand Rapids to help celebrate the 30th anniversary of that significant birth.

Pastor Daniel Nguyen, the fourth and current pastor of Grand Rapids Vietnamese UMC, said, “The weekend was a two-in-one so we have been very busy!” The Vietnamese National Caucus of The United Methodist Church held their annual convocation in tandem with the anniversary observance. The Caucus spent time in worship, ministry seminars, and small group discussion July 28 and 29. Administrative work of the convocation took place after Sunday’s celebration.

Nguyen reported that the gathering of youth and young adults that is part of every convocation was the largest ever, with 80 in attendance. The Convocation was held at the Prince Conference Center on the campus of Calvin College. “We had to rent two rooms,” Nguyen said with excitement, “one for Vietnamese speakers and the other for English-only.” Their “wonderful time together” included work at Feeding America and relaxed time outdoors.

The heart of the event was the Sunday morning gathering at the church, located at 212 Bellevue SE. Rev. Daniel led worship. The guest preacher was the Rev. Dr. Bau Dang, Senior Pastor of Garden Grove United Methodist Church in California. A former District Superintendent and a director of the General Board of Global Ministries, Dang served as one of the translators of a new version of the Vietnamese Bible, 2011 version. His message, reflections on the Walk to Emmaus, challenged those present to keep eyes open for Jesus Christ. The entire service, including his sermon, was bilingual.

Two of the church’s former pastors were in attendance — Rev. Cuong Nguyen (2004-2008) and Rev. Sanh Van Tran (2008-2012). Tuyet Tran and her daughters, Betty and Jennifer, were also present; they are family of the founding pastor, Rev. Vinh Tran (1987-2004) who is currently in Florida. These pastoral leaders each received plaques commemorating their service.

Also honored were six special guests representing the connectional church in the West Michigan Conference. Award plaques were presented to Rev. Ellen Brubaker (District Superintendent at the time of the chartering); Rev. Bill Haggard (current Grand Rapids District Superintendent); Mary Lou Fassett (recognized on behalf of the late Rev. Ronald Fassett, Director of Grand Rapids Metro Ministries in 1987); Rev. Richard Youells (pastor of the Olivet UMC that served as host of the Vietnamese congregation for ten years); Pros Tumonong (long-serving Conference Treasurer in West Michigan, who provided financial training); and Bishop Laurie Haller (who shepherded the church through crisis as their district superintendent). Haller was unable to be present due to episcopal duties in Iowa but she sent greetings.

A delicious meal was served under tents in the church yard. Superintendent Haggard, Rev. Daniel, and other leaders participated in the cake-cutting.

Rev. Dick Youells was serving the Grand Rapids: Olivet UMC in 1982 when an article appeared in the city’s ecumenical newsletter. A group of people affiliated with the Vietnamese Evangelical Church was seeking a new home. Youells met with their pastor, Rev. Khiet, who accepted Youell’s invitation to share the Olivet building. This partnership went on for a decade. Youells shared a precious memory: “At one point three congregations were meeting in the building; the Vietnamese, the Hispanic, and Olivet. Worshipping together on Christmas Eve, singing Christmas carols in each language, it felt like a little Pentecost!”

It was in 1984 that the Rev. Vinh Tran’s ordination was approved in West Michigan and he became the pastor of the Vietnamese congregation. Rev. Ellen Brubaker recalled Tran invited four denominations to share their history and polity with the congregation, each on a different Sunday. The Reformed Church in America and Christian Reformed Church were sponsoring many coming to the U.S. from Vietnam at that time. The congregation heard from both. The people’s tradition in Vietnam was rooted in the Christian Missionary Alliance; they were heard. Rev. Brubaker spoke for United Methodism. The congregation voted and chose to become United Methodist. “It was a great honor to be part of that,” Brubaker noted. “There was a sense that the Holy Spirit was in this movement to birth a church.”

The congregation grew and by 1987 they chartered. “Vinh Tran continued to work with District Superintendent Brubaker and Rev. Ron Fassett from Metro Ministries,” Daniel Nguyen added. In 1992 they moved to their own building. Brubaker pointed out that not only was Grand Rapids: Vietnamese UMC the first to charter, they were the first Vietnamese congregation in the world to have their own building. “Credit for that goes to Ron Fassett,” she said. “Ron and I spent a lot of time on the road to determine where they were to have space.”

The congregation has been in that space ever since. The July 30 celebration, “was a day for looking forward to the future with the younger Vietnamese generation,” Rev. Daniel remarked. “It was not primarily about us or about our fathers.” He called this year’s attendance of so many young people “a big encouragement” for the Grand Rapids congregation and the whole Vietnamese National Caucus. “In ten more years,” he noted, “we will celebrate a 40th anniversary and they will be the leaders.”

He and others at the convocation are engaged in a ministry of encouragement. “We are trying to help with inspiring the youth and young adults and we are urging them to enroll in seminary or other United Methodist studies.”

Rev. Daniel explained that the Vietnamese United Methodist Church is moving toward a more multi-lingual and multi-cultural experience. “Soon we will be in the hands of the young people, who themselves speak English. They hear and understand Vietnamese but they bring their friends who speak English only.”

The Grand Rapids: Vietnamese UMC “has done a lot of things for new refugees and immigrants coming to the community from Vietnam,” Nguyen noted. The current President of the Vietnamese American Association of Grand Rapids is a member of the church.

Celebration preacher, Rev. Bau Dang, encouraged worshipers to remember their mission to the Vietnamese people in the United States and around the world. Two persons once part of the Grand Rapids: Vietnamese UMC, Rev. Ut To and Rev. Karen Vo To, are key missionaries in the General Board of Global Ministries’ church-planting initiative in Vietnam today.

Rev. Ellen Brubaker concluded with hope. “It was a joy for me to look at the young families there on Sunday. Obviously, these young people and little kids had not been born when this all began. They are the dreamers for the future.”