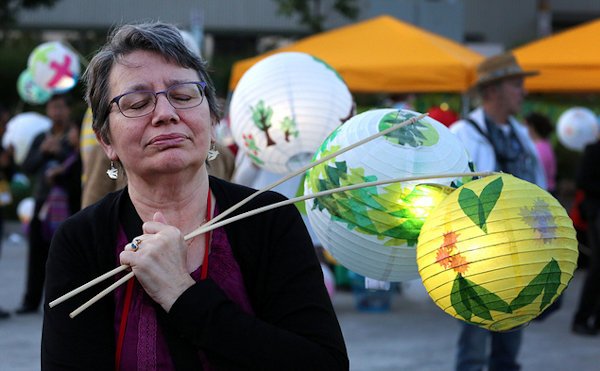 The Rev. Karen Nelson closes her eyes in prayer during the the May 12 Climate Vigil at the United Methodist 2016 General Conference in Portland, Ore. ~umns photo/Kathleen Barry

United Methodist bishops and other Christian leaders object to Paris accord decision.

United Methodist bishops and other Christian leaders objected to President Donald Trump’s decision to withdraw the United States from the Paris accord on climate change.

The bishops urged Trump and other U.S. leaders to reconsider the decision, while also calling on Christians to prioritize climate justice.

“We believe that this decision, if not reconsidered, will contribute to worsening the state of this planet already exacerbated by overconsumption and our misuse of resources,” said Bishop Bruce R. Ough, Council of Bishops president, in a statement on behalf of the council.

“The decision further isolates the United States from critical and essential climate and energy use conversations and negotiations.”

Harriett Jane Olson, the top executive of United Methodist Women, said in a statement that the decision means church members will have to step up their own efforts on behalf of environmental protection.

“Now it is all the more urgent for us to work in our communities and in the corporate sector to make the needed changes,” she said.

In December 2015, 195 countries signed an accord at the United Nations Framework Convention on Climate Change in Paris making a historic commitment to lower the greenhouse gas emissions that cause global warming. In the agreement, which is not legally binding, each nation agreed to help lower greenhouse-gas emissions based on targets each submitted.

Under the accord, the United States had pledged to cut its emissions 26 to 28 percent below 2005 levels by 2025. The U.S. federal government also committed up to $3 billion to aid poorer countries in their green endeavors. The United States has been the Earth’s second-largest carbon-dioxide polluter, according to 2013 data from the World Bank.

A joint poll by the Harvard school of public health and Politico found 62 percent of Americans supported staying in the Paris agreement.

Among those in Paris advocating for the agreement were United Methodists from around the globe, including representatives from the United Methodist boards of Global Ministries and Church and Society.

In a joint statement, the three groups expressed deep dismay with the decision and noted that the world’s most vulnerable populations are “hit first” by climate change.

“This is a tragedy, missing an opportunity to show real, accountable leadership for the future of humanity and our common home,” said the Rev. Olav Fykse Tveit, top executive of the World Council of Churches. “This is a decision that is not morally sustainable — and not economically sustainable either. The struggle for climate justice has to continue.”

In 2009, the Council of Bishops adopted the statement “God’s Renewed Creation: Call to Hope and Action,” pledging to work in hopeful ways to protect the environment.

In their June 2 statement, the bishops pointed out that many members of the multinational denomination live in coastal areas that are already seeing the effects of a warming planet.

“We see God’s creation groaning in pain (Romans 8:22) when we see the adverse impacts of global climate change,” Ough’s statement said. “This impact disproportionately affects individuals and nations least responsible for the emissions.”

United Methodists in a number of countries already are taking action to relieve the suffering caused by environmental degradation — from severe drought to super typhoons.

In 2016, The United Methodist Church in Liberia set up a climate-change task force to monitor the environmental activities involving the work of international companies operating in that country.

Leaders of United Methodist Women also have made addressing climate change one of the group’s four mission priorities.

This week, Olson joined 65 U.S. organizations in signing a letter opposing the delay of new Environmental Protection Agency regulations of methane, smog-forming pollution and toxic emissions. The new regulations were set to take effect June 3. However, Scott Pruitt — EPA head and a strong advocate for pulling out of the Paris agreement — issued a 90-day stay during which energy companies would not have to comply with requirements to fix their equipment to reduce emissions.

Even with the expectation that Trump would make changes to U.S. environmental policies, Wespath Benefits and Investments — the United Methodist pension agency — announced plans in February to support moves toward a low-carbon economy.

“The prudent fiduciary in us has to realize how the world around us is changing and position our investments to respond to that,” said Kirsty Jenkinson, Wespath’s managing director of sustainable investment strategies, when the announcement was made. “The transition to a low-carbon economy is already underway.”

The United Methodist Board of Church and Society, while deploring Trump’s decision, also found encouragement in United Methodists’ growing leadership on environmental issues.

“And today, we commit ourselves again to opposing all efforts to weaken, defund or roll back progress toward a cleaner, safer and more just future for God’s people and God’s planet,” said a statement by the Rev. Susan Henry-Crowe, the agency’s top executive.

The U.S. exit from the agreement actually cannot be finalized until near the end of Trump’s term because of the accord’s legal structure and language.

A number of U.S. states, cities and companies, in the wake of Trump’s announcement, have pledged to continue investing in renewable energy and working to lower emissions.

“By caring for God’s people and God’s planet, we offer ourselves as instruments of God’s renewing Spirit in the world calling for social and environmental holiness,” Ough’s statement concluded. “We will do this by challenging those whose policies and practices neglect the poor, exploit the weak and harm the environment.”