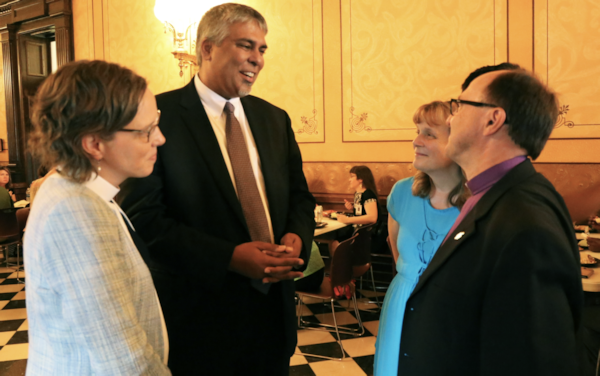 World Refugee Day is June 20. Michigan congregations are encouraged to learn and act.

On Tuesday, Bishop David Bard joined an ecumenical group of Lansing area clergy, laity and lawmakers at the State Capitol in Lansing to support Refuge Lansing: Stories of Resettlement in Mid-Michigan. The focus of the traveling exhibit is the sharing of positive accounts of refugees whose lives have contributed to the community after seeking asylum in the United States.

Through an exhibit, book, and website, The Refuge Lansing project shares stories about men, women, and children, 12 families, who now call Greater Lansing home after fleeing war and violence during the last 40-plus years.

The project opened at the State Capital on Tuesday ahead of United Nations World Refugee Day. UN World Refugee Day, June 20, commemorates the strength, courage, and perseverance of more than 65 million refugees living in the world today. Project organizers note that refugees are different from immigrants in that they have been displaced from their homes by the threat of violence, conflict or fear of persecution. The UN reports that every minute 24 people leave everything behind, escaping only with their lives.

Touring the exhibit, Bishop Bard commented, “At the heart of Christian faith is an affirmation that God so loved the world, and our world has too often been a place where lives are disrupted by war and violence, creating horrific situations which displace persons and families.” He added, “God’s love for the world is made more evident when displaced persons are given the opportunity to find a new community of care and friendship.”

United Methodists have been called to welcome refugees. According to The United Methodist Book of Resolutions (Paragraph 6028), the story of refugee survival is as old as time. “Throughout the centuries, political and economic factors, including wars; health and environmental challenges; and racism, xenophobia, and religious discrimination have at times uprooted people and at others lured them to new venues across deserts, rivers, continents, oceans, and national and ethnic boundaries.”

Further, The Book Of Resolutions calls upon United Methodists to, “provide support and opportunities for refugees, asylees, and migrants, including annual conference and local church ministries that promote the Right to Stay in traditional sending countries, Safe Passage in countries of transit, and training for Welcoming and Belonging in receiving locales.”

The JFON Network is providing compassionate service across Michigan. JFON West Michigan operates from Grand Rapids, Kalamazoo and Traverse City. JFON Southeastern Michigan is based in Detroit, Dearborn and Ypsilanti. For resourcing contact: