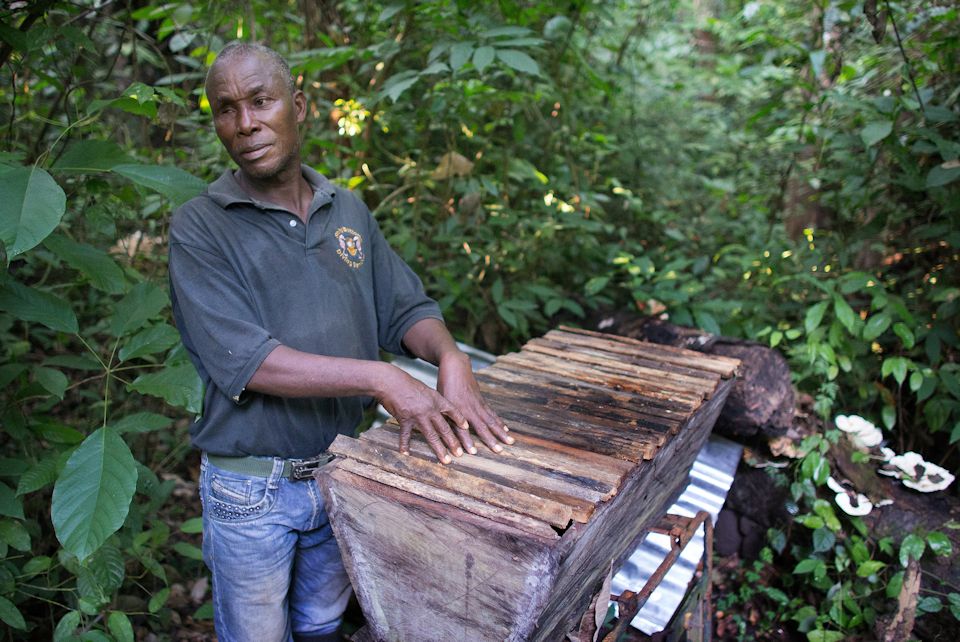 The Rev. Joe Gatei displays one of the beehives he keeps near Ganta, Liberia, to supplement his income as a pastor. ~ UM New photo/Mike DuBose

Crop and livestock farmers in Liberia, DR Congo, Sierra Leone, and Zimbabwe will benefit from the Yambasu Agriculture Initiative, a $1.34 million grant from the United Methodist Committee on Relief.

Directors of Global Ministries approved grants for the Yambasu Agriculture Initiative for annual conferences in Sierra Leone, Liberia, Zimbabwe, and the Democratic Republic of the Congo during the October 2021 board meeting. Grants ranging from $166,000 to $265,000, for a combined total of $1.34 million, will support the episcopal areas as they establish new agricultural projects, including crop and livestock farming on church-owned land.

In the spring of 2020, Global Ministries established an agriculture initiative for Africa, responding in part to the urging of the vice president of Global Ministries at that time, Bishop John K. Yambasu. Sadly, in August 2020, Bishop Yambasu died suddenly in a car accident outside Freetown, Sierra Leone. The board of directors honored the bishop by naming the agriculture initiative after him. Directors approved the first grant for Sierra Leone last year and continue that support into a second phase with a second grant.

The first phase of Sierra Leone’s project has been completed, with the cultivation of 140 acres of rice, seven acres of vegetables, and the installation of a piggery enterprise. In addition, by establishing farmer groups at several locations, 2,520 persons across 360 households benefited in this first phase of the project.

The next phase focuses on post-harvest handling and value addition and marketing while promoting multiple production cycles through proceeds from the first phase. The conference will reinvest its earnings to cover the cost of seed and tools for subsequent production cycles.

The Zimbabwe Episcopal Area received grants to develop farms in both its annual conferences. Zimbabwe West Conference will focus on Nyadire, Hanwa, and Waterloo farms, while Zimbabwe East will focus on Mutambara, Hartzell, and Nyakatsapa farms. In both areas, increased agriculture production, chicken raising, and training for farmers with small holdings in more resilient, climate-smart farming practices will increase the income of church-owned farms and contribute to the financial sustainability of the church and its programs.

The Liberia Episcopal Area plans to strengthen the capacity of rural communities to increase productivity, improve food security and generate income – resulting in poverty reduction, sustainability, self-sufficiency, economic growth, and development for both the community and the conference.

Funding will support the training of 200 farmers in newly formed community farmer groups in three enterprises: renovation of production infrastructure and establishment of new facilities; scaling up livestock and beekeeping; and improved market access for participants and the wider community.

Central Congo Annual Conference, DRC, plans intensive agricultural development activities for income generation, producing primarily three crops at commercial scale and selling at affordable prices. In addition, the income generated by the project will enable the church to implement other projects over time.

The project will provide direct support to farmer groups through land preparation, seeds, and training and serve as a market (or promote marketing) for their produce. The local community will also benefit from the project through jobs and increased income.

This funding will support an initial cultivation cycle at Kamisamba Farm, establishing a seed production enterprise and serving as a model training center for expansion to farmer groups at four surrounding conference-owned farms in the next crop cycle. Revenue from seed production at Kamisamba will directly support the North Katanga Conference, with production by farmer groups contributing 15% of yield to the conference.

In 2022, the Yambasu Agriculture Initiative plans to increase the ability of episcopal areas and annual conferences to build on current sources of revenue and to seek and manage funding from other donors or investors. In addition to improved household livelihoods and food security, as participants find welcome in the church through community trainings, church membership may also grow. Directors approved an appropriations budget of $1.25 million for the Yambasu Agriculture Initiative in 2022.

The Bishop John K. Yambasu Agriculture Initiative can be supported through a gift to Advance #982188.