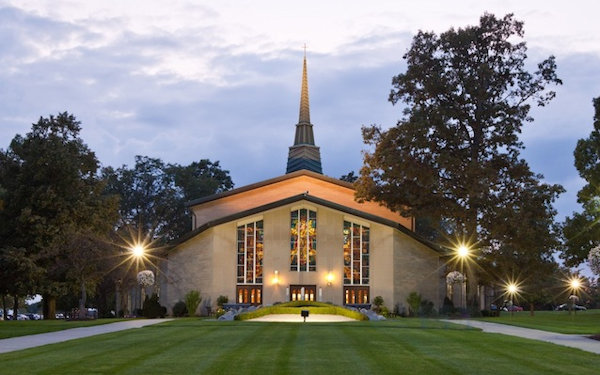 Adrian College's Herrick Chapel has been a spiritual home for students and for members of The Detroit Annual Conference. ~photo Adrian College

Albion College President Mauri Ditzler tells of a day when an architect was touring the campus of Monmouth College where he previously served as president. The architect asked an unlikely question, “Where did you put the river?” Ditzler said, “How did he know, I wondered, that many decades ago we had diverted a stream that ran through campus into a series of underground tunnels? Unlike the architect, whose trained eye immediately spotted terrain indicative of a former stream, most of us walk across campus daily without ever realizing that a river once bisected the landscape and still flows beneath it.”

President Ditzler compared that underground stream to the Presbyterian heritage which was part of Monmouth’s founding. He writes, “The college’s curriculum, its personality, and its educational philosophy are all reflective of our founders’ vision. Like the unseen river that flows under our campus, those Presbyterian ideals are still bubbling along.”

The headwaters of Michigan Methodism’s stream of higher education can be found at Kingswood School in Bath, England which was founded by John Wesley in 1748. For more than 250 years, Kingswood has carried on the Wesleyan passion for education, not just for our own children and not just religious education, but the education of all of our children. That passion for education flowed across the Atlantic with Frances Asbury and the early circuit riding preachers who not only planted churches but established colleges all across the American frontier. Still today there are over 125 United Methodist-related schools, colleges, universities and seminaries in the USA. Two of those schools are in Michigan.

Albion was founded by early Methodist settlers to serve the needs of their children and the Native American children in the territory. It was chartered in 1835 and the first buildings were erected in 1840. About the same time, Rev. Asa Mahan established Adrian College around his commitment to Methodist teachings and his active abolitionist stance. He was an ardent anti-slavery preacher and he used the phrase “intrinsic worth” to describe the humanity and dignity of every person. Rev. Chris Momany, chaplain at Adrian has been a leader in the fight against human trafficking, our modern form of slavery. Today those values are lived out in both schools through their commitment to inclusivity and diversity in the faculty and student body.

Adrian President Jeffery Docking believes this commitment to social justice and the worth of every individual is part of what links the colleges to the denomination. He says, “We share with the church these historic values—that people matter, that kindness and love direct our actions and that the model of Jesus Christ provides the values which guide us. This hand-and-glove relationship between the church and the college provides the foundation for all we do.”

At Adrian he says those values are lived out in two ways. First, in the classroom the desire is to help every student gain insight into the world around them and to discover their God-given gifts so they can become their best for themselves and for the larger community. Second, outside the classroom the college seeks to develop a co-curricular experience which will bring balance to the students’ lives. This includes the spiritual, social and communal aspects of life.

President Ditzler describes these small, private,  liberal arts colleges as “distinctively American”. Particularly here in the mid-west, they were planted by preachers in almost every small town to provide a place where students would learn to think, not just memorize; where they would learn broad values like love of God and love of neighbor, but would be encouraged to discover the world for themselves. “That is”, he said, “the way Methodists teach, the way we define wisdom. It is being true to our roots.” President Docking says he believes this educational approach which is not dogmatic, not telling you what to believe, but rather helping you understand yourself and the world is true to the Methodist tradition.

To maintain the relationship with the church, both colleges include six representatives of the Annual Conference on their boards of trustees and the Resident Bishop is automatically an ex-officio member of the board. Both schools provide spiritual support for students through the office of the chaplain. At Adrian, Chaplain Chris Momany is a full member of the faculty and as a United Methodist clergy, he is also appointed to this position by the Bishop. At Albion, Rev. Donald Phillips, a local African Methodist Episcopal pastor, serves as the part-time chaplain. Many clergy serving in the Detroit and West Michigan Annual Conferences did their undergraduate work at Albion or Adrian and currently Adrian is offering a pre-seminary program for college students who are considering ordained ministry. Both schools offer a variety of scholarships for United Methodist students. Historically the colleges were the site of the annual conference sessions until West Michigan moved to Calvin College and with the merger of the two conferences, Adrian could no longer house the new conference session.

Dr. Roger Ireson is a retired clergy member of the Detroit Conference and former General Secretary of the General Board of Higher Education and Ministry. He described the church’s relationship with the colleges as the relationship between parents and adult children. Ireson, “We gave them birth, we raised them up. We still love them and we are still family, but they stand as mature and independent adults in the world.”

And a river still runs beneath it—the flowing river of our commitment to higher education in the Wesleyan tradition. Together, the church and the colleges are raising up a new generation of leaders who will serve the world in the future. The text of Charles Wesley’s Kingswood Hymn says it best:

Come, Father, Son, and Holy Ghost,
To whom we for our children cry;
The good desired and wanted most
Out of thy richest grace supply;
The sacred discipline be given,
To train and bring them up for heaven.

Error and ignorance remove,
Their blindness both of heart and mind;
Give them the wisdom from above,
Spotless, and peaceable, and kind.
In knowledge pure their minds renew,
And store with thoughts divinely true.

Unite the pair so long disjoined,
Knowledge and vital piety.
Learning and holiness combined,
And truth and love, let all men see
In those whom up to thee we give,
Thine, wholly thine, to die and live.

~Rev. Dr. John E. Harnish is a retired clergy member of the Detroit Conference. For seven years he served at the General Board of Higher Education and Ministry and worked with the University Senate in maintaining the relationship between the church and the institutions.  He has served on the Board of Trustees at Methodist Theological School in Ohio and the Baltic Methodist Theological Seminary in Estonia and is currently a member of the Board of Trustees at Adrian College.