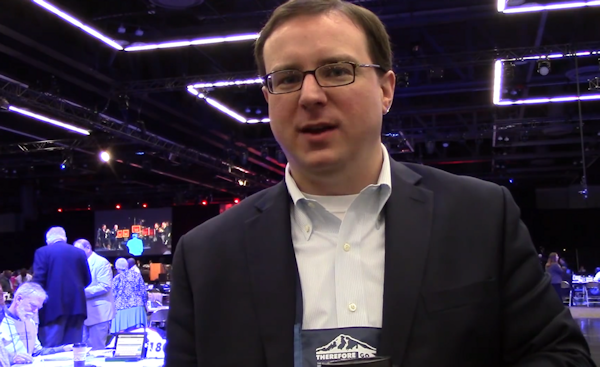 Mathew Pinson, immediate past North Georgia Conference Lay Leader and chair of their General Conference delegation, says, “For them (the Council of Bishops) to go about this in a new and different way is their prerogative.” ~umcom

Lay leaders are petitioning the Council of Bishops to include more laity on the Commission on A Way Forward.

Some United Methodist laity are calling for equal representation to a special commission that will look at the church’s teachings on homosexuality and issues of church unity.

“It is one of the most important conversations of our time,” states an online petition calling on the bishops to reconsider the makeup of the commission.

The executive committee of the Council of Bishops announced on Oct. 5 that the list of nominees to the commission includes eight bishops, 13 clergy and eight laity. Letters sent to nominees ask them to prayerfully consider whether they are willing and available to respond.

A group of laity started an online petition that states: “We find it unacceptable that only 28 percent of the commission are laity.” As of 6 p.m. Oct. 6, more than 200 people had signed the petition.

A group of mostly current and former lay leaders is drafting a response to the bishops addressing concern about the commission’s makeup, saying that General Conference guidelines on membership of commissions and other agencies call for one-third clergy (including bishops), one-third lay women and one-third lay men. However, at least one lay leader defended the right of the bishops to configure the commission as they deemed best.

Bishop Bruce R. Ough, president of the Council of Bishops, said the nominating process is in the early stages.

He also pointed out that the special commission will not be making the final decisions but will submit recommendations that the bishops will then take to General Conference.

“This whole process is predicated on the fragile hope and possibility that a group of people from across the church can actually help the church think about a way forward,” he said.

Laity are foundational to The United Methodist Church, said Irene R. DeMaris, one of the lead organizers of the petition. A lay member living in Alexandria, Virginia, she has a master of divinity from Seattle University School of Theology and Ministry.

“The Wesleyan movement has been fueled by the faith of our laity and therefore it is vital for our voices to be a part of one of the most important conversations of our time,” she said.

Darlene DiDomineck, a deaconess at Arch Street United Methodist Church in Philadelphia, Pennsylvania, and a signer of the petition, said in addition to equal representation by laity, the voices of lesbian, gay, bisexual, transgender and queer people should be included.

“Much of the work tasked to the commission deals with human sexuality and many deeply committed laity in our church are folks who have been turned away from ordained ministry because of their sexual orientation,” she said.

One lay leader called on the church to give the commission a chance.

“As the person who gave the last speech before the vote on this at General Conference, I would hope we would allow this process to work out and to participate as prayerful supporters of what is coming next,” said Mathew Pinson, immediate past North Georgia Conference lay leader and chair of delegation.

Pinson said he does know that the United Methodist Church’s Book of Discipline has recommendations for the makeup of large church groups, but said this commission is “unlike anything the church has ever done before,” he said. “For them to go about this in a new and different way is their prerogative.”

Pinson said he did think the commission was “short-sighted” in only selecting eight laity but added that he was more committed to honoring the process than criticizing.

“Human life is at stake. United Methodists have such a powerful global witness for Christ around the world through health care initiatives, mission work and projects that make people’s lives better in the United States and abroad. I am not willing to gamble … We need to quit playing politics,” he said.

But Dr. Steve Furr, past president of the Association of Annual Conference Lay Leaders, was more disturbed by the commission composition.

“I got almost physically sick. I never dreamed this would happened. I thought at most it would be 50-50 lay and clergy. I expected it to be based on General Conference,” Furr said. The association of lay leaders is not involved in writing or circulating the petition, but members have been discussing the makeup of the commission since it was announced.

“We don’t know who those eight lay people are, but laity are clearly under-represented,” Furr said. “They need to hear our voice on this. It’s hard for us to trust the process when we don’t feel represented. This is not the polity of The United Methodist Church.”

Lonnie Brooks, former lay leader of the Alaska Conference, said a group consisting mostly of current and former lay leaders is drafting a response to the bishops to express their concern about the commission’s makeup.

“It may be cast in stone, but we’re not going to be silent about it,” Brooks said.

Ough said it felt it was a bit premature to be commenting on commission membership.

“When we entered into this process, at least I was pretty clear we were not likely to please everybody. I wouldn’t be surprised when the list is printed if there might be other groups that would say that’s not what I thought it would look like or that’s not fair.”

Ough said plans are being developed to include a wide body of persons talking about a way forward.