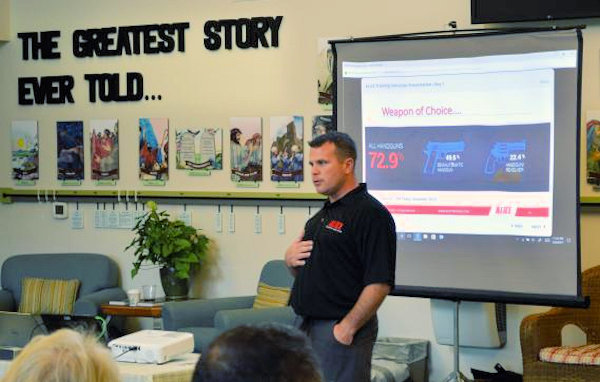 Linglestown Life United Methodist Church, in Harrisburg, Pa. had training Oct. 9 on what to do in the case of an active shooter. John Lubawski of the ALICE Training Institute led the session. ~photo courtesy Rev. George Reynolds

The massacre at a Texas Baptist church has United Methodist churches re-focusing on security.

Last Sunday’s massacre at a Texas Baptist church has had United Methodist churches across the United States expressing heartbreak and offering prayers.

They’ve also been re-focusing on security.

For some churches, the response has included asking their conferences for materials and classes on active shooter training.

“I’ve gotten a dozen requests today, and I haven’t even gotten to all the emails,” said the Rev. Hollie Tapley, disaster response coordinator for the Great Plains Conference.

A gunman’s attack at First Baptist Church of Sutherland Springs, Texas, left 26 dead and 20 wounded, and riddled the church building with bullets.

That it happened in a small-town setting, where nearly everyone knows everyone else, is part of what’s heightened fears among church folks.

“That just describes half or more of the churches in the United States, and especially United Methodist churches,” said the Rev. Derrek Belase, a former police officer and current director of discipleship for the Oklahoma Conference. “I felt like I was looking in a mirror as far as what I see in Oklahoma, the churches I work with.”

“I felt like I was looking in a mirror as far as what I see in Oklahoma, the churches I work with.” ~ Rev. Derrek Belase

Mass shootings at public places are extremely rare events, but this one came less than two-and-a-half years after nine people were shot to death at Charleston’s Emanuel African Methodist Episcopal Church.

Less than two months ago, a gunman killed one and wounded several others at a church in Antioch, Tennessee.

The Texas church shootings prompted the United Methodist Board of Church and Society to call for more mental health care services, tighter background checks for gun purchases and a ban on assault weapons.

The agency’s top executive, the Rev. Susan Henry-Crowe, also asked United Methodists to read “Our Call to End Gun Violence,” from the denomination’s Book of Resolutions.

Meanwhile, United Methodist conferences in the U.S. almost immediately began posting to their websites safety training documents and videos, as well as notices of classes.

The Eastern Pennsylvania Conference prepared to offer active shooter training in all its districts.

“As Christians, we are called to speak out about how to live in this world in nonviolent ways, to examine our weapons laws for ways to be more protective and to find ways to prepare our churches for the unthinkable,” said Philadelphia Area Bishop Peggy A. Johnson in a blog post.

Active shooter training began to be offered widely after the Columbine, Colorado, shootings, said the Rev. Mark Beideman, a United Methodist pastor in Pennsylvania who is studying to be certified in such training through the ALICE Training Institute.

The United Methodist Cathedral of the Rockies, in Boise, Idaho, offered a well-attended Safe Church Summit last year and active shooter training was one topic.

“And, actually, what we learned was that’s not the most likely thing to happen. … But we have to prepare for everything,” said Joe Prin, the church’s building superintendent, in an interview with United Methodist Communications.

Linda Linn pushed successfully to have active shooter training at Epworth United Methodist in Indianapolis, part of an effort to have it become a “ready church” for all types of emergency response.

A police offer provided a well-attended, two-hour session in September.

“Sad to say, but I wasn’t surprised this kind of shooting has happened,” said Epworth member Linn, of the Texas tragedy. “I guess I’m more of a realistic pessimist. This kind of thing can happen anywhere.”

Belase, of the Oklahoma Conference, shared with Ministry Matters his list of steps a church can take to minimize the threat of gun violence and to prepare in case it happens.

He urges building relationships with police and other first responders:

“Invite them to come tour the church buildings. … If they have a mental picture of your facilities, they’ll be able to respond with knowledge, if the need should arise.”

Tapley’s handouts to Great Plains Conference churches stress having and practicing a plan for evacuation or lockdown.

“We’re not here to build a fortress. We’re open and we’re welcoming, and that means people are made to feel safe.” ~Rev. John Feagins

Inevitably, the question arises about church members carrying concealed weapons and potentially using them against an attacker.

“Even though we (the Great Plains Conference) say we’re a weapons-free zone, we know it happens,” Tapley said of pistol-packing church members.

But she strongly urges against that as a strategy. State laws on weapons vary, and in some cases a church could be liable if someone is hurt in cross-fire, Tapley said.

Conversations with law enforcement have reinforced her concerns.

“One of them said to me, ‘When we go into active shooter situations, we’re looking for the individual with a gun. We don’t know if you’re the good guy or bad guy.’ ”

“We’re not here to build a fortress,” said the Rev. John Feagins, pastor of La Trinidad United Methodist Church in San Antonio, Texas. “We’re open and we’re welcoming, and that means people are made to feel safe.”