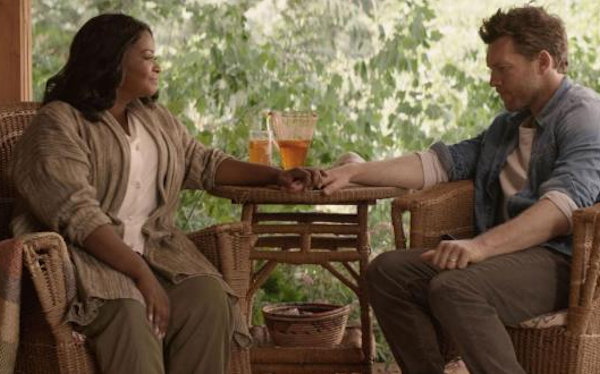 God (left) comforts grief-stricken Mack as he tries to recover from a family tragedy in this scene from "The Shack." ~courtesy of Summit Entertainment

“The Shack” opens in U.S. movie theaters this weekend, and even though the film is an adaptation of the controversial, best-selling 2007 novel written by Canadian author William P. Young, viewers can find comfort in the story, say United Methodist clergy.

“’The Shack’ can be a powerful metaphor for understanding God’s desire to offer us healing in times of trial, doubt, and unspeakable suffering,” says the Rev. Matt Rawle, lead pastor at Asbury United Methodist Church in Bossier City, Louisiana.

In the film, Mack (portrayed by Sam Worthington) tries to recover from a deep grief resulting from a terrible tragedy in his family. This grief severely threatens Mack’s faith, which is already on shaky ground after years of challenging God.

Rawle is a firm believer that works such as The Shack, which integrate pop culture with Christian faith, can make Jesus more accessible and encourage discussions.

“Although the film presents an unorthodox view of the Trinity, it would be shortsighted to see the story as heretical or blasphemous. In fact, using this cultural offering as a conversation starter may help those who are suffering find a language to share their grief and begin the healing process,” says Rawle.

Rawle is referring to the controversy surrounding the author’s (and film’s) non-biblical depiction of the Trinity: Papa, portrayed by African-American (and Academy Award-winning) actress Octavia Spencer; Jesus, portrayed by Avraham Aviv Alush, an Israeli actor of Tunisian heritage; and Sarayu, the physical manifestation of the Holy Spirit, portrayed by Japanese actress Sumire Matsubara.

“It’s important to note that The Shack is not meant as a theological treatise, but rather a record of a journey to find healing from the worst tragedy that a parent can experience,” says the Rev. Christy Thomas, a retired elder in The United Methodist Church. “It’s best to view the movie through these eyes rather than through the eyes of ‘I can tell you what God is actually about.’ (The author) can’t do that and neither can anyone else.”

One should watch the film “with an understanding that all language about and knowledge of God is necessarily limited and metaphorical. We humans don’t have the ability to fully take in the Presence of God,” says Thomas. “We can only describe it in words of our experiences. Those experiences are inevitably limited and interpretive.”

“The way Young depicts the Trinity may unquestionably look problematic, especially the use of a black female as “Papa,” i.e., God the Father, but the Scriptures make it clear that the nature of God transcends gender classifications. For United Methodists, long comfortable with women in leadership, the more inclusive depiction of the Trinity really should not be an issue,” she says.

In hopes of fostering conversations, a number of United Methodist churches, such as Faith United Methodist Church in North Canton, Ohio, are inviting members to group screenings of the film. Led by Pastor Steve Stultz Costello, the church is renting an entire theater for one showing and handing out free tickets to church members and the community.

“Faith UMC believes God is at work in everyone’s life guiding us on a journey into faith,” says Rev. Costello. “We believe that the journey is assisted by questions – all kinds of questions. The Shack raises timeless questions about God and humanity through a story of tragic loss, grief, pain and healing.”

By watching the film together, says Costello, “we believe God will be present and with God comes the hope of new beginnings, movement on our faith journey, even new life.”

This sentiment is also present in the lyrics of the title song “Keep Your Eyes on Me,” sung by Tim McGraw, who also stars in the feature, and his wife Faith Hill. The song was written by McGraw, Hill, Shane McAnally, and Lori McKenna, the songwriter who wrote the Grammy-winning “Humble and Kind,” also sung by McGraw.

McGraw told CMT.com that the song captures “the spirit and soul of what the film was saying. There’s a part where that line is spoken,” he explains, “and it was so powerful, and we took that and ran with it.”

The final refrain is inspiring throughout the entire church year, but especially here at the beginning of Lent:

*Christopher Fenoglio is managing editor for UMC.org at United Methodist Communications. He can be reached by email or at 615-312-3734.

The Rev. Matt Rawle is the author of the Pop in Culture Bible study series published by Abingdon Press, which currently includes The Redemption of Scrooge, The Faith of a Mockingbird, The Salvation of Doctor Who, and Hollywood Jesus with What Makes a Hero? slated to release in Fall 2017.