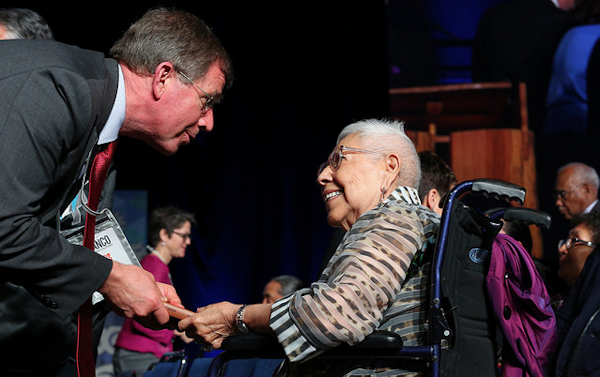 A great granddaughter of Sand Creek massacre survivors looks to a future of reconciliation.

Henrietta Mann is a professor of Native American studies, a former college administrator, a member of the Cheyenne tribe and a descendant of a group of Native Americans slaughtered by a militia under the direction of a Methodist minister, Colonel John Chivington.

The Cheyenne and Arapaho people had relocated to the Sand Creek area in the Colorado Territory after Governor John Evans, also a Methodist, issued a proclamation that all “friendly Indians” should report to the nearest fort where they were told to camp. Shortly after that, Evans issued another proclamation asking Colorado citizens to kill all Indians, Mann said.

Both of Mann’s great-grandmothers survived the Sand Creek Massacre, an ordeal her people have not forgotten.

“I come from a strong line of people – survivors that help make me who I am,” Mann said.

Mann is not a member of The United Methodist Church. However, she often attends church programs to speak on the tragic event that unfolded at Sand Creek in 1864. She attended the 2016 General Conference to hear Gary Roberts present his review of the event in the “Sand Creek Report” on May 18 and assist The United Methodist Church in its repentance to the Cheyenne and Arapaho people.

The massacre at Sand Creek developed as a result of settlers’ greed for land and their view towards Native Americans, Mann said.

“Land has been the single, most critical issue between Indians and the strangers that came to live with us since we made contact,” Mann said. “We just stood there in the way of progress, because they wanted to settle the land from the Atlantic to the Pacific.”

Despite the pain endured by her ancestors in 1864, Mann said she is hopeful for harmony between the Cheyenne and Arapaho people and The United Methodist Church.

Michigan may seem far from Colorado but Native Peoples in the state have also suffered decades of harm. An Act of Repentance and Reconciliation will take place at the 2016 Annual Conference, Friday, June 10, 3:45-5:00 pm at the Breslin Center in East Lansing.

The “Sand Creek Report” was presented during Wednesday’s afternoon plenary session. After the report, Mann said she believes there is still work to be done to continue the healing process.

“It has to remain a collaborative effort,” Mann said. “It’s a lifelong journey that the church and the Cheyenne and Arapaho are on and it has to continue.”

Mann has an extensive background in higher education and Native American studies. She previously taught at the University of California – Berkeley, is professor emeritus of Native American studies at the Montana State University and was president of the Cheyenne Arapaho Tribal College. In 1991, Rolling Stone Magazine named her one of 10 leading professors in the United States. Mann still serves as special assistant to the president of Montana State University.