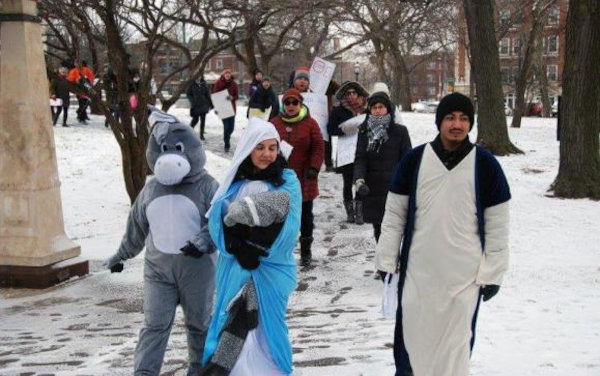 Members of Humboldt Park United Methodist Church in Chicago joined in an ecumenical Las Posadas procession. The re-enactment of Mary and Joseph’s search for safe lodging carries special resonance for at least one family at the church. ~ photo courtesy Rev. Paula Cripps-Vallejo

For this family, the tradition of Las Posadas involved a personal search for safe lodging for Christ’s birth.

“Who will give lodging to these pilgrims who are weary of traveling the roads?”

As a child in Mexico City, Elizabeth recited a version of this line every year at Christmastime.

She and her neighbors — decked out as a sort of mobile Nativity scene — marched down their block re-enacting the search for room in the inn.

The children knocked on doors and could expect at least a few rejections before finally a neighbor welcomed them inside. There, they enjoyed a party featuring delicious food, warm camaraderie and a piñata ready to burst with candy.

The tradition, popular in Mexico and increasingly in the U.S., is called Las Posadas. The Spanish word posada means inn or lodging. Think of the ritual as a bit like trick-or-treat but with a message of Feliz Navidad.

What was a fun childhood custom now has special resonance for Elizabeth, 24, and her immigrant family.

Like Mary and Joseph, Elizabeth and her family journeyed in search of safe lodging. They too faced shut doors and real peril.

Elizabeth puts herself in the dusty shoes of the pregnant Virgin Mary. “You’re not doing anything wrong, yet they won’t accept you,” she said. “And you are in dire need.” Although Elizabeth is in the U.S. legally, she asked that her full name not be used because of anti-immigrant sentiment.

“One misconception is that people are trying to circumvent the law. No, they are trying to understand it and to navigate it.” ~Rob Rutland-Brown

“The clients we serve all want to do things the right way,” said Rob Rutland-Brown, executive director of the national network. “One misconception is that people are trying to circumvent the law. No, they are trying to understand it and to navigate it.”

For Elizabeth and her family, gaining lawful status was anything but easy.

Americans often ask why unauthorized immigrants in the U.S. don’t simply wait their turn and come lawfully. For many immigrants, however, there is no line to get in and no “turn” they can wait for.

U.S. law only admits immigrants in specific categories. The most common legal pathways are to have a family member who is a U.S. citizen or an employer willing to wait possibly for years and pay potentially thousands of dollars to sponsor you.

Even then, there are strict limits based on country of origin. The more people from a particular country want to immigrate to the U.S., the harder it is to gain admission. That’s particularly true for people from Mexico.

Currently, the U.S. Customs and Immigration Service is processing applications from 1996 for the unmarried Mexican children of U.S. citizens.

Elizabeth’s father had no family members who were U.S. citizens, and he feared for his family’s safety in Mexico.

He owned a small business selling water coolers and filters, Elizabeth said, but knew that if it got too big the drug gangs would want their cut of protection money. She said being a business owner in that part of Mexico could be dangerous because of the amount of power the gangs wield.

Her father took a job as a street food vendor in Chicago. He earned enough to send for his wife and two children. Elizabeth was 7 and her sister 3. They all came to the U.S. illegally.

“I remember that on the way here, we were in one truck and we couldn’t move,” Elizabeth said.

Once they got to Chicago, all four family members stayed in one bedroom of another family’s home. Elizabeth’s parents worked day and night as food vendors to pay down the debt of coming to the U.S., and 7-year-old Elizabeth cooked and cared for her younger sister. “I was her little mom,” Elizabeth said.

Eventually, their debt paid, the family could afford a tiny basement apartment.

Still, that was not the end of the family’s struggles.

Elizabeth, her parents and sister now have legal status because they have a U visa.

U visas are only available to victims of violent crimes who help law enforcement in the prosecution of criminal activity. The visas are also available to the crime victim’s immediate family since they too typically must deal with the fallout of the brutality. Congress has set aside 10,000 such visas a year.

Elizabeth qualified for the visa because she was almost raped at the age of 12.

Years later, Elizabeth learned about Justice for Our Neighbors from a friend at Humboldt United Methodist Church. At first, she was reluctant to visit the ministry’s free legal clinic in Aurora, Illinois. She worried it might be a scam — something many immigrants encounter when they try to get legal status. Her trust in her friend won the day, and her pastor at the time, the late Rev. Ramon Nieves, drove her to her first appointment.

National Justice for Our Neighbors calls its network “a hospitality ministry.” The clinics, located at churches, typically offer childcare and meals along with legal advice.

Read more about Justice For Our Neighbors–Michigan.

Some sites charge immigrants on a low-cost sliding scale of $25 to $200. Legal services at Northern Illinois Justice for Our Neighbors are free. But all sites, like the hosts of a Las Posadas party, want to open their doors to all.

“It’s not just helping people fill out forms; it’s about helping someone feel they are loved,” Rutland-Brown said.

Applying for the U visa can be an ordeal. Among other things, applicants must write a letter detailing the trauma they experienced. “What that letter is supposed to prove is you were emotionally hurt,” Elizabeth said. “The fact is someone is judging your pain and trying to decide if you suffered enough.”

However, with the visa, she knew her family could come out of the shadows and enter the pathway to citizenship.

The hospitality of Justice for Our Neighbors helped get her through the grueling application process, she said.

She is now one of the ministry’s biggest fans. She even helped start a legal clinic at Humboldt Park United Methodist.

“Everyone was just so welcoming,” she said. “It was at a church. I didn’t feel threatened. They didn’t look at me like a stranger.”

She and her family now have had a visa for a little more than a year. Even before the visa arrived, they received work permits.

“Getting the visa meant that those who wanted to throw me out of the country I call home, no longer could,” she said.

Elizabeth’s father is a restaurant manager, her mother is a home health care worker, and Elizabeth is both a daycare worker and college sophomore with aspirations of becoming a social worker or psychologist.

She no longer is a member of Humboldt Park, but her mother and sister still are active members. The congregation’s Justice for Our Neighbors clinic also is going strong, meeting eight to 10 times a year.

“Humboldt Park United Methodist Church has always had a heart for Wesleyan social holiness in collaboration with personal holiness,” said the Rev. Paula Cripps-Vallejo, the church’s senior pastor and former chair of the Northern Illinois Justice for Our Neighbors.

The congregation just participated in a Las Posadas service itself this December along with other churches in the Logan Square Ecumenical Alliance.

Elizabeth, for her part, expects to be at Humboldt Park again for Christmas Eve.

“That’s my family,” she said. “People are so warmly welcomed.”