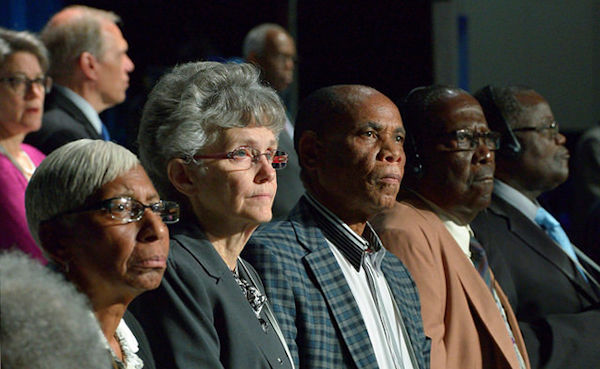 Members of the Council of Bishops listen as Bishop Bruce R. Ough reads a statement about sexuality and the church from the Council at the 2016 United Methodist General Conference in Portland, Ore. ~umns photo/Paul Jeffrey

The Council of Bishops’ Executive Committee has approved a framework for implementing the Commission on a Way Forward.

Meeting in Chicago July 21-22, 2016, the Council of Bishops’ Executive Committee approved a framework for implementing the Commission on a Way Forward and took a step toward a called session of the General Conference in 2018.

The Council acknowledged that the landscape of the church has changed dramatically since the General Conference approved the Council’s proposal in May, but re-affirmed their commitment to lead the church forward.

“The reported declarations of non-compliance from several annual conferences, the intention to convene a Wesleyan Covenant Association and the election of the Rev. Karen Oliveto as a bishop of the church have opened deep wounds and fissures within The United Methodist Church and fanned fears of schism,” said Bishop Bruce R. Ough, Council president, in a detailed statement outlining the actions taken. “The church finds itself in an extremely fragile, highly contested season.”

The statement further reads, “We affirm that, as disciples of Jesus, we are all called to maintain unity in the bond of peace.  As a Council, we re-affirm our commitment to lead the church in discerning and charting a way forward. We intend to do so with prayerful attention to both urgency and thoughtful preparation.”

The Council adopted a purpose statement for the Commission, including its mission, vision and scope, and determined that it will be composed of 20-25 members to be identified by August 31 with a target of October for an initial meeting. Each bishop will nominate up to five persons, and names that have previously been submitted to either the president or executive secretary of the Council will be considered as well.

A search is already underway for a professional facilitator to design and guide the Commission’s discernment process.  Bishops Ken Carter, Sandra Steiner Ball and David Yemba have been selected to serve as a team of moderators to preside, provide spiritual guidance and pastoral care. Updates on the Commission’s actions will be provided through regular press releases every 4-6 weeks.

An invitation to prayer for the Commission involving the entire church, called “Praying Our Way Forward,” will be launched in October. More details regarding that initiative will be forthcoming.

In a related action, the Council further voted to urge the Judicial Council to include the South Central Jurisdictional Conference’s request regarding the election of Bishop Karen Oliveto on the docket for their fall meeting on October 25-28.