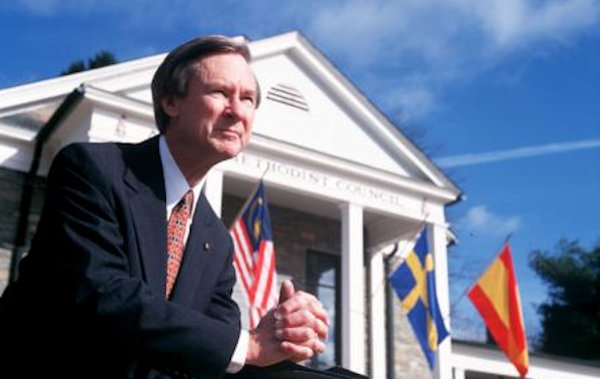 During his 25-year tenure as head of the World Methodist Council, the Rev. Joseph Rice Hale strengthened the bonds of the worldwide Wesleyan family, led dialogues with other Christians and formed a relationship with Pope John Paul II and bestowed awards on those pursuing peace. Hale died Nov. 14 in North Carolina at the age of 81. ~photo courtesy Arkansas Democrat-Gazette

Former World Methodist exec lauded as “an incredible leader who built platforms for others to stand on.”

At first glance, the Rev. Joseph Rice Hale did not appear to be larger than life.

But a look past his modest, friendly demeanor revealed a committed Methodist who used Houdini-like magic tricks to attract a crowd; counted Pope John Paul II as a friend; publicly recognized worldwide peacemakers and achieved his goal to unite the followers of John Wesley.

Hale, 81, who led the World Methodist Council from 1976-2001, died Nov. 14 at Silver Bluff Village near Canton, North Carolina, after a long battle with Alzheimer’s and Parkinson’s diseases.

The Rev. H. Eddie Fox, who worked with him for many years, called Hale “one of the giants of the 20th century” who could evangelize the Methodist gospel like no one else.

“Joe Hale was one of the most gracious persons you would ever meet, with a great passion for work and ministry,” Fox told United Methodist News Service. “He took the World Methodist Council and moved it from a committee to a movement.”

Council members now include 80 Methodist, Wesleyan and related Uniting and United churches, including The United Methodist Church. It represents more than 80.5 million people in 133 countries and marked the World Methodist Conference in Houston, Texas, last August.

Perhaps it is not surprising that Hale — born on March 25, 1935, and raised in Camden, Arkansas — came from a family of preachers. His great-great grandfather, David Rice, was a Presbyterian minister who founded Transylvania University in Lexington, Kentucky. Two of Hale’s three siblings chose careers in ministry.

But Hale also was fascinated by magic and began staging shows while still in elementary school.

“The one act I remember him doing on numerous occasions was the escape from the straitjacket,” recalled the Rev. Ed Beck, a former colleague now living in Arizona and a close friend for more than 50 years.

Beck first saw Hale perform that feat while dangling upside down high above the gymnasium floor at Southern Methodist University in Dallas, during the half-time break at a basketball game. Later, when both were working at the Board of Evangelism in the 1960s, Hale employed his straitjacket trick and other magic (another trick reportedly involved escaping from a steel drum filled with water) to great effect during spring break at Daytona Beach, Florida.

“Joe and I led a group of athletes and artists and musicians, about 30 to 40 people (to Daytona),” Beck explained. “We would be on the beach in the afternoon.”

Hale would perform his tricks “and then he would witness for Christ.” During the six years of this Easter-time pilgrimage, Beck said, Hale was widely recognized by the beach crowd.

Both were part of a “department of evangelists” established by Harry Denman, a layman, legendary evangelist and top executive of the Board of Evangelism, who also worked with others to create the denomination’s Foundation on Evangelism. Hale was named a distinguished evangelist by the foundation in 2001.

“At its height, there were about 12 members of that staff,” Beck said. “We traveled across the country and parts of the world doing all kinds of missional enterprises.”

An early inspiration for Hale, and later friend, was the Rev. Billy Graham, the famed evangelist.

Moving to a world stage

Eventually, he abandoned the magic acts but not his zeal for evangelism.

After serving for 15 years with the agency now known as Discipleship Ministries, Hale was elected in 1976 to the top staff position for the World Methodist Council, where he sought to unify the world for Christ.

This new international role turned out to be a natural fit for the evangelist, who had become a globetrotter when his father, Alfred Clay Hale, a former teacher, began a second career with the U.S. State Department. Hale spent a year in Thailand with him during his college years.

He met numerous world leaders, from the king of Thailand to Queen Elizabeth to Anwar Sadat, but his most meaningful connections, of course, came through faith.

While proud to be an Arkansas native and a Methodist clergyman, Hale was “above all else” a world citizen bent on fostering cooperation across the larger Wesleyan family, recalled Thomas McAnally, the former head of United Methodist News Service.

“If there was ever a banner extolling Wesleyan heritage and world Methodism, one could be sure that Joe Hale was waving it with enthusiasm throughout his ministerial career,” he said.

On the worldwide ecumenical stage, one of Hale’s strongest relationships was with Pope John Paul II. He had at least two dozen meetings, large and small, with the pontiff known for his commitment to dialogue with other Christians.

Pope John Paul II also knew Hale’s wife, Mary. He prayed for her by name before thousands in St. Peter’s Square in 1997 after her leg was broken in an accident as the couple prepared to fly to Rome for a papal audience Hale had arranged for members of the council’s executive committee.

In a UMNS commentary written after the pope’s death in 2003, Hale recalled that relationship and the “extraordinary” impact that Pope John Paul II had on the world. “His respect for Christians in traditions other than his own Roman Catholic Church was a gift he left us all,” he wrote.

Fox, who had worked with Hale at the boards of evangelism and discipleship and spent some 25 years as the council’s head of World Methodist Evangelism, considered Hale himself an “incredible leader” who built platforms for others stand on.

Those platforms were undergirded by Hale’s commitment to peace and justice. As an example, Fox pointed to his involvement in the fight against apartheid. Hale quietly organized a meeting with South African President P.W. Botha so that religious leaders could press him to dismantle those laws.

He also enabled the council “to step forward after the collapse of the Soviet Union,” Fox said, to assist churches in Latvia, Lithuania and Estonia, and he had a passion for promoting a peaceful co-existence for Israelis and Palestinians.

Hale’s passion was born of a friendship he had developed years earlier when, while traveling with his father, he met a Palestinian man who was caretaker for the garden tomb of Jesus in Jerusalem. The man and his family hid at the tomb during the 1967 Arab-Israeli War, but when the man left to retrieve something at their home, he was shot and killed.

“That deeply distressed Joe for many, many years,” Beck recalled. “He was a constant worker trying to bring reconciliation between the Israelis and Palestinians.”

Beck noted that Hale “was not a self-promoter,” but acted out of deep conviction.

“To me, his message was so relevant for today,” Fox said. “Right now, with what’s going on in our world, we need to be focusing on Christ Jesus, who is the prince of peace. He lifted that up in developing the World Methodist Peace Award.”

Proposed during the 1976 World Methodist Conference, the peace award has honored both Methodist and non-Methodist recipients, including Mikhail Gorbachev, Jimmy Carter, Anwar Sadat, Nelson Mandela, Sister Helen Prejean and Hale himself after he retired from the council in September 2001.

The Rev. Ivan M. Abrahams, the council’s current top executive, was co-officiant at a Nov. 17 service celebrating Hale’s life, which took place in Waynesville, North Carolina, where Hale lived for many years. He is survived by his wife and their son, Jeffrey Hale, of Raleigh, North Carolina.