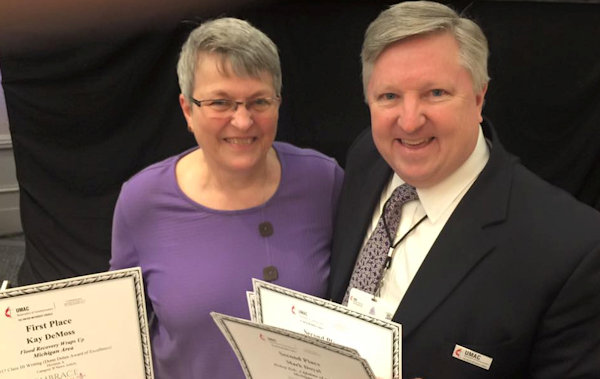 Michigan Communication Team members--Mark Doyal and Kay DeMoss-- were in the winners' circle at the recent meeting of the United Methodist Association of Communicators. ~umac photo/Art McClanahan

The United Methodist Association of Communicators recognizes excellence in storytelling.

NEW ORLEANS, March 23, 2017—Thursday was a special day for storytellers gathered here from around the world to “Embrace the Story” at the United Methodist Association of Communicators Conference.

In the morning worship session, held at First Grace United Methodist Church, conference participants heard a powerful sermon by Pastor Shawn Moses Anglim. He concluded, “Sometimes you need to stay in the dark long enough for God to turn on the Light.”

Later, during the evening Awards Celebration Dinner, the efforts of 160 communicators were recognized. Their entries, across 10 classes of communication, bore witness to the shining of Christ’s Light at levels local to global.

The United Methodist Association of Communicators (UMAC) named Carolyn Conover, director of communications for the Greater New Jersey Conference, as Communicator of the Year for 2017.  “Carolyn has been a gift to our conference,” said Greater New Jersey Bishop John Schol, who nominated Carolyn for the award. “She has helped us move forward and accomplish things we would never have been able to without her leadership.”

Bishop Schol says Conover helped the conference raise nearly $18 million dollars in disaster relief, which helped rebuild and repair 250 homes and restore many lives after Super Storm Sandy. He said her leadership helped put the Greater New Jersey Conference on the map for recovery efforts in the state of New Jersey.

UMAC also named Catherine (Cate) Monaghan as the Hall of Fame inductee for 2017. Monaghan served as the director of communications for the California-Nevada Annual Conference from 2006-2012 and as past president of UMAC.

“Her commitment to our mission and ministry was deep and grounded in her own faith experience,” said former colleague Linda Caldwell, the California-Nevada Conference superintendent of mission collaboration. “Under her leadership we expanded and improved our regular communications to the churches and improved our Web presence. She clearly poured herself completely into the work with great thoughtfulness and skill.”

Bishop Beverly Shamana said Monaghan, who served as director of communications during her tenure as bishop of the San Francisco Episcopal Area, had an adept skill at helping make sense of diverse information and issues in the church. “Cate had a keen ear for following important stories in the conference and was a valuable addition to the staff,” said Bishop Shamana. “Her integrity of spirit was always positive and undergirded by a strong faith. I fully support her nomination.

These women are two exceptional bearers of Christ’s Light.

The Michigan Area Communications team was recognized in a variety of categories of Annual Conference publication/production:

During the UMAC business meeting on March 24th, Doyal was elected as President of the United Methodist Association of Communicators for a two-year term.

Best in Class awards are as follows:

Doreen Gosmire, member of the UMAC leadership team and associate director of communications for the Dakotas Conference, has organized the UMAC awards for the past two years.

She says this about the value of the competition: “Learning about each other’s work gives you ideas. It refreshes you and renews your spirit for telling the story.”

Gosmire notes that there was a total of 250 entries representing 300-400 contributors.

“Those entries represent a massive amount of energy, time and resources,” she said. “It’s phenomenal the number of people out there telling the story of The United Methodist Church in so many different ways.”

A high point of the evening was the Andrews Family Band. The association was also thrilled to welcome communicator Ndzule Tueche “Joe” of the United Methodist Church in Côte d’Ivoire, attending the gathering with the help of the UMAC “Helping Hands” fund.

This year’s UMAC conference included a Wednesday evening communication gallery showcasing of newsletters, photographs, videos and various media provided the opportunity for participants to learn from the work of colleagues.