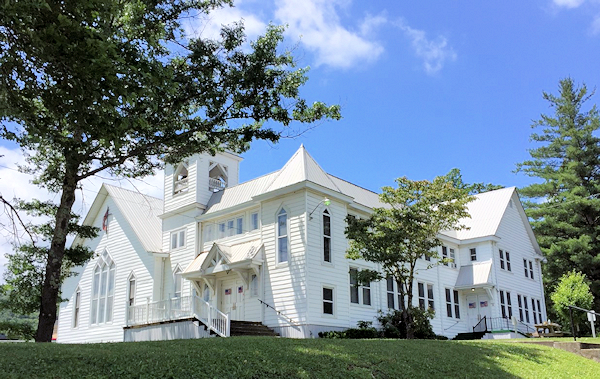 The gospel comes alive during an 1,800-mile road trip across six states.

I just returned from a few days of vacation.  There was time spent on the usual bit of projects around the house along with preparation for and the great experience of an annual family reunion at our home on the 4th of July. The next day Linda and I headed out on a five-day, six-state, 1,800-mile road trip. We had some tentative destinations in mind but no specific plans. The wonders of modern day portable communication allowed us to make calls along the way and arrange for brief “surprise” visits with 25 different family and friends in four of those six states.

Where possible, we got off the freeway and traveled the 2-lane roads of Ohio, West Virginia, Virginia, Kentucky, Indiana and Michigan. And on those secondary roads is where we saw, in the great phrase of the legendary Paul Harvey, “the rest of the story.” We visited my cousin who serves United Methodist congregations in Rainelle and Rupert, WV. He has been in the heart of the flood area that was devastated in June, 2016 by 11 inches of rain and the ensuing mountain run-off. Picture rocky hills, villages and homes in the narrow valleys, divided by elevated railroad beds and the highway, with a winding creek alongside them all. The water was recorded as a 1,000 year flood! The homes were the first to be ravaged by the water, mud and mold. People’s spirits were soon strained to their capacity.

Likely what you most read about was the “tragic flooding and millions of dollars of damage at the Greenbrier Resort, in White Sulphur Springs, WV.” The couple of times I had a TV on this past weekend, the Greenbrier PGA Classic was being featured and there were stories of “the remarkable job that had been done to rebuild and restore the course to its classic beauty.” Paul Harvey would likely tell us the rest of the story. He would mention the fact that a year later the rebuilding of homes still continues. He would highlight the celebration that will take place as Bishop Sandra Steiner Ball visits again in three weeks. The region will gather to show appreciation to all the volunteers that have helped restore hope to more than 18 counties that were declared disaster regions.

“Paul Harvey would mention the fact that a year later the rebuilding of homes still continues.”

As Jonathan walked us through the Rainelle UMC the voices of the youth and adults who were finishing up their work camp that week echoed through the two-story all wood frame church. More than 36 different work camp teams have been hosted by the Rainelle UMC. An upper meeting room was converted into a shower facility (thanks to UMCOR Disaster Response Gifts).  Classrooms and the pastor’s large study became sleeping quarters. (His office was moved to a closet just off the sanctuary.) All of this took place after the 18 inches of run-off water was removed from the fellowship hall and the wooden floor structure was rebuilt. The other church in Rupert was not in the flood zone and became a Red Cross temporary shelter. The roads were so flooded or damaged that it was more than a week before Jonathan could make the six mile trip to physically be with the persons in the Rupert congregation. Debris is still piled in front of some homes and mobile homes stand as abandoned and muddied reminders of the tragedy that swept through this valley. The signs of hope that rise among the rubble are the Habitat Homes that have been constructed on 8’ concrete block pillars.

The church was constructed in the early 1900’s by the local sawmill company. “There seemed to be a lot of Methodists who had settled here. So let’s build them a church.” The original walls are not plaster or drywall. Wood panels cover the walls from floor to ceiling, much of it chestnut, a tree now rarely found in the region any longer. Jonathan indicated that what has sustained this congregation was not the facility, but their incredible commitment to be outwardly focused and do all they could to help and love those in their community.

“I wonder if any of the TV crews had even considered the wider human interest story still under way just 15 miles up the road?”

It was an inspiration to be present with this young leader and see the ministry of this congregation. The Conference has experienced this inspiration as well. Jonathan was one of the Annual Conference preachers this past month.

Our trip then continued on, literally driving through Lewisburg and White Sulphur Springs, WV past the Greenbrier Resort and all the commercial buses transporting the thousands of spectators attending the PGA classic. The TV reports were correct you could see no damage from the flood. I wonder if any of the TV crews had even considered the wider human interest story still under way just 15 miles up the road?

We traveled out of town on a secondary road that took us through the rolling pastureland of southern West Virginia and the western tip of Virginia. The beauty of the sun setting over the hills was a gift for which we gave thanks. We had waited a bit late to try and find a motel and were now in a region less populated. As we rolled through one town we noticed a UMC with cars in the parking lot and two women visiting next to them. They were kind enough to suggest lodging in the next town. They invited us back “…tomorrow… we just finished sorting for the annual rummage sale.” Servant hearts are in every state; the UMC at its best.

The next morning, true to our plan we avoided the interstate and headed north up 460 toward Grundy and Pikeville. We noticed the interstate in Kentucky doesn’t even cross east and west over the entire eastern end. As we wound along we were struck how many miles we had traveled with no sign of a grocery or even a convenience store. Where did these people get food? It seemed like a “food desert.” We soon realized we were in the heart of the abandoned and reduced production coal mines. Poverty was evident and deteriorating small village buildings far outnumbered the predominant number of mobile homes. Urban decay is not the only challenge facing our nation.  Children in poverty are hidden in the hills every bit as much as they are alone on the city streets in the summer.

“Urban decay is not the only challenge facing our nation.  Children in poverty are hidden in the hills every bit as much as they are alone on the city streets in the summer.”

Interesting that the devotions for the day we departed were based in Acts 8:26. “Rise and go south…this is a desert road.” Phillip is able to share the Gospel with a person who had yet heard “the rest of the story.” I am not aware of any particular Gospel message we shared. In fact the message of this trip may have been for us: “The need continues to be great, do not grow weary. For God who has begun a great work in you will be faithful to complete it (Philippians 1:6).”

I invite us all to continue to vigilant in our sensitivity to those in need and make use of every opportunity “to preach the Gospel…and if necessary use words.”

~ “If you make my Word your home, you will indeed be my disciples.  You will know the truth and the truth will set you free (John 8:13 New Jerusalem Bible.)”  Each article I write for this column is based in the guidance of a particular Scripture passage. I pray that these reflections, stories and information will assist you in your own witness and service as a Disciple of Jesus Christ.