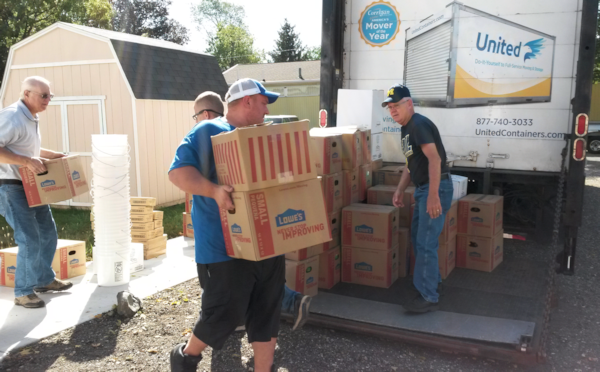 Springport United Methodist Church was one of 15 drop-off sites for disaster supplies. On October 2, 2017 Corrigan Moving picked up all boxes and buckets for a relief run to the Midwest Mission Distribution Center in Illinois.

The Conference asked. Congregations responded with dollars and tons of donated goods.

Over the years Corrigan Moving has transported thousands of boxes of goods as Michigan pastors move from one appointment to the next.

Perhaps the most important boxes that have ever been carried by Corrigan were those that their trucks picked up on October 2nd from 15 sites stretching between Detroit and Pentwater.

Successive storms—Harvey, Irma, Maria—hit the southern U.S. and Puerto Rico late in September. Rain was still falling and winds were still howling as Conference leaders in Michigan, both staff and volunteers, gathered to plan the state’s response to these disasters.

They knew that the congregations in Michigan are a vital part of the United Methodist Committee on Relief’s network of relief and recovery. They knew that there were people relying on UMCOR to deliver help and hope. They knew that concerned churches and compassionate individuals were eager to help. How could Michigan best respond?

A call went out for dollars to bolster UMCOR’s U.S. Disaster Relief Fund, Advance #901670. The Michigan Area Treasurer’s Office reports receipts of $344,711 as of October 10.

Disaster Coordinators contacted UMCOR to learn what items were most needed. Michigan Area United Methodist Camping offered their facilities as drop-off sites. Eight local churches opened their doors to receive supplies for hygiene kits and cleaning buckets that had been identified as the number one needs.

Once churches received instructions on what to solicit and how to prepare it, boxes began to fill with the designated materials. A challenge remained. How to get all those boxes of supplies across the Michigan border and on their way for further processing at the Midwest Mission Distribution Center in Chatham, Illinois, hundreds of miles away.

It was then that the long-time relationship between The United Methodist Church and Corrigan Moving provided a solution.

Corrigan picked up the entire cost of its panel trucks visiting the Michigan drop-off sites, re-loading at the warehouse and driving the semi-load to Illinois the next day, October 3. Michigan United Methodists celebrate this gift of muscle and money and thank Corrigan Moving for their major contribution to this humanitarian effort.

The total number of cleaning buckets and hygiene kits is somewhat difficult to estimate as materials were delivered in bulk, as requested by UMCOR. Further, contributions were reported by the bucket, box, bag, bushel and pallet.

The best “guesstimate” on cleaning buckets is 1,750.

Further, the Corrigan semi was not the only vehicle to make the trek south. Bob McCormick, Blue Water Disaster Coordinator, reports: “Lisa and I delivered 2,947 pounds of buckets and supplies to Midwest Mission Distribution Center with our motor home. These were picked up at the Marlette drop off … over and above the supplies collected at Lake Huron Camp.”

Amy Fuselier, Director of UMCOR Relief Supplies says the campaign to acquire cleaning buckets was successful with inventories well poised for the foreseeable future. Fuselier added, “Because of your hard work and the generosity of the many member of The United Methodist Church, Sager Brown Depot has been able to assist those affected in Texas by Hurricane Harvey and those in Florida affected by Hurricane Irma. If or when the opportunity to assist those affected by Maria presents itself, we are certainly prepared to do so.”

Hygiene Kits are still needed. Churches that continue to collect for Hygiene Kits should mail boxes of materials to Midwest Mission Distribution Center as per instructions given here.

The recovery efforts for these storms will be years-long. Rebuilding of lives and homes will continue long after the headlines have faded. Contributions to Advance #901670, U.S. Disaster Response, will go 100% for needs like those presented in this week’s companion feature, “Faces of the storm.”

The Rev. Russell Pierce, interim executive director of mission engagement and director of The Advance, the designated giving channel of The United Methodist Church, said it best, “We really are there for the long haul.”

UMCOR’s disaster response is a three-stage process: an emergency stage; a relief stage to help homeowners assess damage and stabilize their homes if possible, while also caring for their emotional and spiritual needs; and the long-term recovery stage. Volunteers are needed throughout the process. Michigan is hosting four Early Response Team training sessions to help facilitate readiness to deploy. Click here for a list of these opportunities.