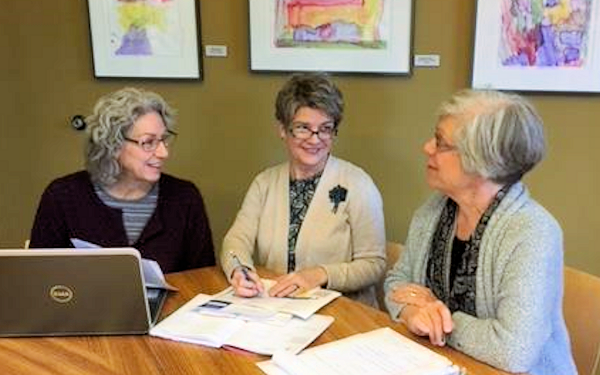 One thing the recent hurricanes revealed was that devastation is not easier when you have little to lose. It’s hell. Poverty is a problem. While we are all becoming only too aware of the growing inequity of our economic system, the facts are still startling. Current U.S. statistics from the Kairos Center show that “48% of the U.S. population is poor or low income, 1 in every 2 people.” By the time they are 20, “half of all children [in the United States] will be on food stamps, including 9 out of 10 African American children,” because poverty is generational, and it is also related to racism.

With statistics like that, one wonders if there is any hope. Well, on a recent autumn evening in Grand Rapids, there was a whole room full of hope at the Inner City Christian Federation (ICCF). The occasion was the “Marking of a Milestone Celebration” of Circles Grand Rapids, whose goal is “to decrease the poverty rate in Grand Rapids by 10% in the next 10 years,”

Maybe that doesn’t sound like much, but to the graduates of the program, the “Circle Leaders” (because they are leading themselves out of poverty), it is everything: self-respect, financial security, and systems of support. One by one, they stood up at the Celebration with their community supporters (their “Allies”), and shared their stories of success.

“Circles increased my circles,” beamed Leader Margaret Hurd, and Alison Boston, another Leader, reported happily on her newfound budgeting skills. “I’ve learned I’ve got lots of people,” said Circle Leader Diondra Henderson. “It’s good to be in a space where people care about you, who want what’s good for you.”

Moreover, Circles Grand Rapids is part of a network, Circles USA, of over 70 communities in the U.S. that is continually expanding–and to which they report growth in participants’ income, savings, and other successes. Best of all, their goal is not a temporary solution. “Every 18 months the people of Michigan spend $90,000 on each person in poverty to provide vital assistance programs that ‘manage’ the poverty crisis,” says Circles Chapter Director, the Reverend Julie Liske. Citing the Circles brochure she continues, “Every 18 months, Circles Grand Rapids spends $20,000 to help a family move out of poverty, permanently ending the cycle of poverty in that family for generations to come.”

Making sure the generational aspect of poverty is addressed means Circles has a component for children in addition to its program for adults. Using a developmental approach, teachers offer children of the Leader participants age-appropriate activities designed to promote creativity, problem-solving, and life skills, such as relationship building and compassion. The children regularly share what they have learned with the adults through artistic presentations and written projects.

Rev. Liske became aware of the Circles program when, as Director of the United Methodist Metropolitan Ministry of Grand Rapids, she attended a training on poverty sponsored by the United Methodist Women (UMW). “People kept talking about ‘Circles’,” she remembers. Later, when Liske discovered that Circles addressed the systemic causes of poverty through developing relationships between low-income people and middle- or upper-class earners, she was intrigued.

“My passion is to help the non-poor understand what poverty is or is not,” Julie Liske explains, and—in her words—“Circles Grand Rapids brings poor and rich together for mutual support, mutual challenge, mutual understanding, and mutual transformation.”

“Poverty is perhaps the single most common underlying injustice in all forms of human suffering.” ~ Rev. Julie Liske

The success of this approach was affirmed during the Circles Celebration when several of the graduates’ Allies announced that they were now feisty advocates for the poor and wouldn’t stand for any denigrating remarks about those who were struggling “being lazy.” “People trying to get out of poverty are some of the most courageous people I know!” stated Pat O’Connor, an Ally for Margaret Hurd.

After much deliberation with her Metro Ministry Board of Directors and Grand Rapids District Superintendent, Reverend Bill Haggard, Liske knew Circles was just the kind of high impact project that Metro Ministry needed to launch in the Grand Rapids area. So she traded one directorship for another and began planning.

The Circles curriculum is comprehensive and calls for serious commitment on the part of both Circle Leaders and Allies, but that is what makes it so effective. For the first 12 weeks Circle Leaders are trained in goal-setting and recognizing their own strengths (basically life-coaching).These skills are taught by West Michigan Conference’s trainer extraordinaire, Naomi Garcia, who, as Liske says, “really sets the tone.”

Next Leaders and Allies are paired off, and together they embark on an 18-month series of weekly lessons in building financial, emotional, and social skills. (Circle Leaders are required to attend all of the weekly meetings, which are held on Monday nights, but Allies go to just two and arrange another contact—text, phone call, coffee—each week, too.) Various community “resources” come in to share their expertise in different fields: health and human services, legal aid, finance, politics, business, and education, etc.

Meanwhile, through techniques like “poverty simulation,” whereby participants are given tasks such as applying for food stamps or getting a bus pass, Allies discover what it’s like to deal with the bureaucracy surrounding poverty. They also become aware of the “hidden rules” that govern social and employment situations. They study the shocking effects that the constant trauma of poverty has on brain development and, as Julie Liske describes it, “learn how to help without hurting, rescuing, or enabling.”

Aiding Rev. Liske with this agenda are Coach Facilitator Laure Mieskowski and Cathy Odom, the Hospitality and Youth Program Coordinator. Mieskowski facilitates all the meetings and provides one-on-one coaching and a pastoral presence for the Allies. “The thing I love the most about my job is watching the women witnessing their belief in themselves as their self-confidence grows and they find their voices,” she muses.

A case in point is Lakesha Jackson, who, at the Celebration, reflected on being called “a Leader.” “I never knew what a leader was until I came to Circles,” she said with a big smile, delighted that “here, people are listening to me!”

“At the beginning we were cryin’ because we were in poverty. Today we are smilin’ and cryin’ cuz we made it!” ~Ericka Hill-Anazodo

Cathy Odom believes her most important job is “to create a warm and supportive atmosphere at Circles every week.” She also enjoys enhancing the child care program with interesting activities for the children that relate to the adult learning themes. For example, she has set up a little store with “Monopoly money,” where the kids learn to handle finances.

Odom’s warm and supportive atmosphere was certainly in evidence the night of the Celebration. The room positively glowed with warmth and bright lights. The food smelled and looked wonderful, and the mood was ebullient. There truly was a feeling of deep friendship in the air.

And the graduates and their Allies certainly had reason to rejoice. Rev. Liske announced that overall, the Circle Leaders had increased their monthly income by 96%. Their savings had risen from an average of $42 to an average of $796, and their circles of support—people they could turn to for counsel and advice—had grown substantially as well. Circle Leader Ericka Hill-Anazodo summed it up beautifully: “At the beginning we were cryin’ because we were in poverty. Today we are smilin’ and cryin’ cuz we made it!”

Obviously, it takes a ton of volunteers to make this program go. Last year, in addition to the Leaders and Allies, there were over 130 who helped with short-term jobs like hosting and cooking meals. Funding is always needed and welcome; details and ways to contribute can be found at www.CirclesGR.org.

Circles is an excellent, ready-made mission opportunity for churches or service groups. Participants last time included the following United Methodist congregations from the Michigan Conference: Aldersgate, Cornerstone, Grand Rapids First, Trinity, and the Conference itself, as well as Fountain Street Church and various individuals. This is a personal, caring way to make a difference, as Circles’ motto states, “The way to end poverty is to build community.” Amen.