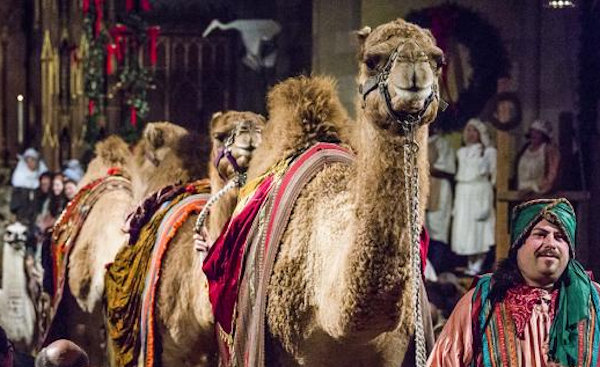 For more than 30 years, the Boar’s Head Festival at the end of Christmas has drawn crowds to Trinity UMC in Springfield, Massachusetts.

For more than 30 years, the Boar’s Head Festival has drawn crowds to Trinity United Methodist Church in Springfield, Massachusetts.

The grand Epiphany festival originated in the Roman Empire when the boar was the first dish served at great Roman feasts. By the 12th century, the serving of the boar’s head at Christmastide had become a symbol of the triumph of Christ over Satan.

“We realized Trinity had the potential to produce such an event,” said Becky Rosendahl Isaacson, Trinity’s director of music ministry and musical director for the festival. “Our Gothic cathedral sanctuary and many talented and artistic church members made this festival a natural.”

With support from the church staff and congregation, fundraising for the production began. The first festival took place in January of 1984 with a cast of 50 members. Today, more than 200 adults and children have roles, including 80 singers of all ages.

“Originally, the festival was meant to be a gift to the community, as well as a fundraiser for the congregation,” said the Rev. John E. Mueller, Trinity pastor. Ten percent of the festival proceeds support local missions.

“It is still a powerful gift to the community, as evidenced by the sold-out performances,” Mueller continued. “It’s a wonderfully creative, musical, visual, inspiring, fun, playful, meaningful and stirring way of telling the story of the birth of Christ.”

Click here for more photos and the rest of the story in Interpreter Magazine.