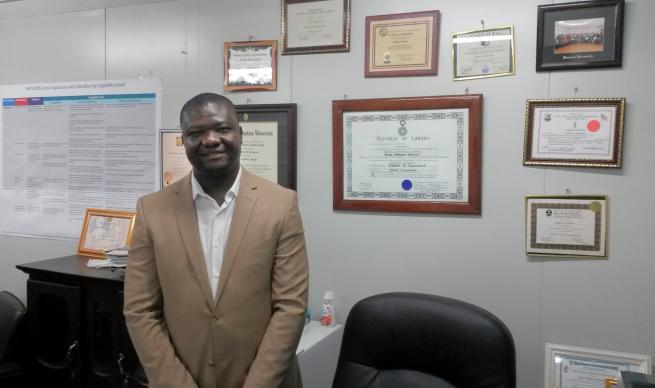 Tolbert T. Nyenswah, head of the response team for Ebola in Liberia, stands in his office. He is also the deputy minister for public health. ~umns photo/Julu Swen

Liberia’s Minister for Public Health says the country is well prepared for any new ebola outbreak.

Liberia is well prepared to deal with any Ebola breakouts due to quick response and use of a test vaccine, said the head of the Liberia Ebola Response Team and deputy minister for Public Health.

Tolbert Nyenswah, who is a United Methodist, said the nation is “85 percent more prepared” to deal with any Ebola flare-up than when the deadly virus hit the country in 2014.

“The way we dealt with the last three flare-ups is an indication that Liberians through the Ministry of Health and Social Welfare can ably manage the virus just like any other disease,” he affirmed.

“All of our traditional public health methods such as washing of hands, keeping your hands off sick people, and confirming the cause of death before touching dead bodies are our source of victory over the Ebola virus,” Nyenswah said.

He said the skills of Liberia health workers have been upgraded to protect them against Ebola, but warned that “health workers need to take precaution as they deal with patients visiting their clinics and hospitals.” He noted that Liberia lost 192 healthcare workers to the Ebola virus.

Nyenswah said through the help of global partners — including the United States — the Ebola trial vaccines have been a source of strength in the fight against the various flare-ups.

The Zmapp drug, an experimental drug that is being tested in Liberia, was used on a boy who recently got Ebola. His recovery shows that Liberia is making progress and on the right path, Nyenswah said.

“We are now using the vaccines on contacts of contacts once they are traced and found in communities to minimize or stop further flare-ups,” he said.

Nyenswah said his training as a youth and young adult in The United Methodist Church has served him well in his role as head of the Ebola Response Team of Liberia.

“I do appreciate the skills of my team members who came from various religious backgrounds including the Muslim, for the way we fought the Ebola virus and its remaining challenges,” he said.

On Feb. 3, 2015, another United Methodist, Dr. Francis Kateh, took the Ebola trial vaccine at the Redemption Hospital in New Kru Town, a suburb of Monrovia. Kateh confirmed he is still healthy and has no signs of complication from the vaccine.

“The three of us along with other team players will ensure that the gains made against the Ebola virus will be translated into measurable outcome that will make Ebola one of the most treatable diseases in Liberia,” Nyenswah said.