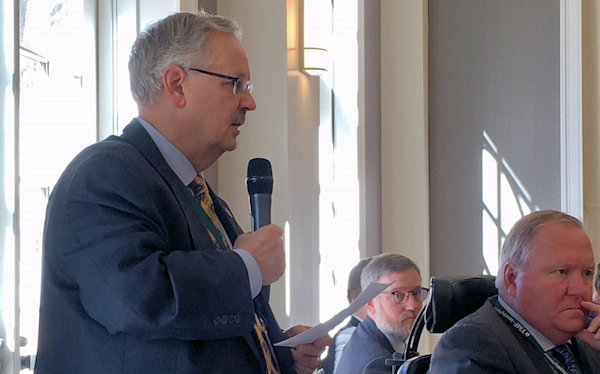 Leaders say adaptive change must focus on the next generations of United Methodist disciples.

DALLAS – Several leaders of United Methodist Church-related institutions voiced optimism and are preparing for possible changes in the global denomination that could occur as a result of the Special Session of the General Conference called for February next year.

As part of its commitment of offering a proposal that would move The United Methodist Church forward with as much unity as possible, the Council of Bishops invited leaders of United Methodist-related anchor institutions for conversations regarding the future of the denomination. The Council has encouraged similar gatherings on each continent. Based on the recommendations from the Commission on the Way Forward the Council of Bishops will present its report to a Special Session of the General Conference in St. Louis, Missouri, February 23-26, 2019.

The two-day gathering in Dallas, Texas, on March 15-16 brought together leaders of foundations, colleges, seminaries and other institutions that extend the mission of the church and anchor the faith in the various public arenas of education, health, finance, community development, and others.

“As the United Methodist Church faces the possibility of deep changes, it is imperative to listen for the impact of such changes on our related institutions, and to learn from them as they have faced their own changes,” said Bishop Bruce R. Ough, president of the Council of Bishops at the start of the meeting on Thursday evening. Bishop Ough emphasized that the work of the Commission was not complete, and both the Council and the Commission were eager to listen to the responses from leaders to shape the work and recommendations that were being proposed.

The Rev. Tom Berlin, a member of the Commission from the Virginia Conference, outlined the work that has been done so far by the 32-member Commission and how they plan to work on the final draft at their next meeting in Los Angeles, March 19-22.

The Texas Methodist Foundation of Austin, Texas, a foundation within the United Methodist denomination with a long history of offering both financial and leadership services to the church, was invited to host the meeting by the Council of Bishops.

The conversation was facilitated by Dr. Gil Rendle, a consultant to the Commission, around two questions:

Bishop Cynthia Harvey, resident bishop of the Louisiana Area and secretary of the Council, offered the opening devotion reminding the group gathered that the United Methodist Church is in unchartered territory. She said it would be imperative to remain focused on the mission – to make disciples of Jesus Christ – and to hold nothing sacred but the mission, so that a new future might unfold.

Leaders weighed impact In group discussions, the leaders of the institutions indicated to the bishops that their organizations were already working on deciphering the impact of decisions that may be made at the Special Session of the General Conference on their organizations; from decisions on who elects the boards of their institutions to risk factors associated with loans and governance issues. They wondered about the impact on historic black colleges, the Ministerial Education Fund, the University Senate, designated donations and other such aspects of their work that may lead to disruption of funding streams especially to those schools that are tied to Universities that receive governmental support.

At the core, the leaders said, that the adaptive challenge would be the UMC’s ability to effectively reach the next generation of leaders and prepare them to be judicious stewards of God’s resources entrusted to the denomination. Some of the leaders said they were already nimble and see the possible changes as opportunities to express continuity, serve as bridge entities for the community, promote social holiness, expand the diversity of their clientele, and reignite the energy and imagination needed for providing churches with creative freedom for mission.

Others pointed out that the sooner the UMC deals with the human sexuality debate, the easier it will be for them to move forward and face a new normal, which they said was already here, especially since some of the younger generation at their institutions were no longer asking questions of human sexuality or even letting it define the core of their faith experience. If the issue of human sexuality was not a defining issue, the leaders noted, it should not be a dividing issue and hence there is need to focus more on purpose and outcomes and relationships rather than structural frames of the organization.

Dr. Rendle further challenged the leaders to provide additional insight to the Council of Bishops and the Commission on a Way Forward about leading a significant institution through a time of change through their own wisdom and experience, noting that the bishops are not of one mind.

During a question-and-answer-session, Bishop Ough and Bishop Ken Carter, one of the moderators of the Commission, explained that the primary audience are the delegates of the General Conference who will make the final determination. The bishops urged the leaders of the institutions to communicate with their constituencies and to partner with other organizations such as annual conferences in providing time and space for the delegations to have discussions that would prepare them spiritually and relationally as groundwork for the Special Session.

In addition to Bishops Ough, Carter and Harvey, bishops Robert Schnase of the Rio Texas Area, Michael McKee of the Dallas Area, Scott Jones of the Houston Area and Jeremiah Park of the Susquehanna Area were also in attendance.