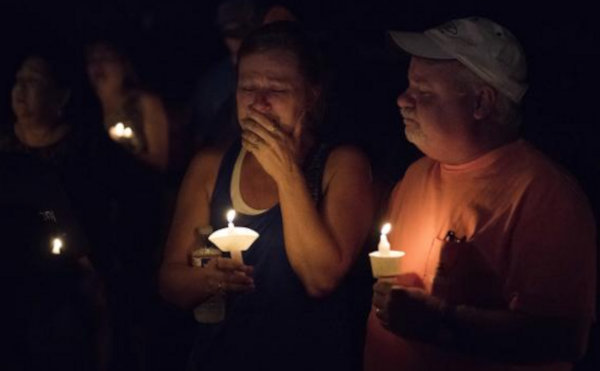 As All Saints Day worship wrapped up at Floresville United Methodist Church, the Rev. Peter Aguilar got word of a mass shooting.

It had happened at First Baptist Church of Sutherland Springs, in the same rural Texas county as his church.

“I know the sheriff, so I called him and said, ‘Do you need me?’” Aguilar recalled in a phone interview. “He said, ‘Yeah.’”

By 12:15 p.m., Aguilar had made the 10-mile drive and arrived at the scene, the first local pastor to counsel survivors, first responders and others.

“They had already roped off the church, but there were shell casings all over and a body on the front lawn. It was carnage,” Aguilar said.

They also had to console members of their own congregations who, like so many in sparsely populated Wilson County, southeast of San Antonio, knew victims of the horrific event.

“I have a member in the church who texted me late last night, a teacher in Floresville,” said the Rev. Gil Paredez, pastor of El Mesias United Methodist Church in that town. “She’s distraught, beside herself. One of her former students was lost in that shooting.”

The fiancé of the son of the lay leader in Aguilar’s church had family members killed at the Baptist church.

“Every congregation in Floresville got touched by it,” Aguilar said of the mass shooting.

“I talked about hope for tomorrow, that tomorrow we’ll continue to build the kingdom of God, continue to be people of faith, continue to spread the good news and not let the forces of evil and destruction get to us.” ~ Rev. Stephen Curry

Authorities said 26 people were killed and another 20 wounded by a man identified by news organizations as Devin Kelley, who entered the church firing a Ruger assault-type rifle. Kelley, 26, died soon after leaving the church, although whether it was by a self-inflicted gunshot or shots from a man who pursued him remained unclear.

It’s the latest in a string of U.S. mass shootings, including the June 17, 2015, massacre at Emanuel African Methodist church in Charleston, S.C. Many Texans also vividly recall that a gunman killed seven people at Wedgwood Baptist Church in Fort Worth, on Sept. 15, 1999.

Bishop Robert Schnase of the Rio Texas Conference learned of the Sutherland Springs shootings while attending the Council of Bishops’ meeting in Lake Junaluska, North Carolina. He called Aguilar, one of his pastors, and later issued a statement.

The Rev. Susan Henry-Crowe, top executive of the United Methodist Board of Church and Society, issued a statement suggesting specific actions for United Methodists to take, including pressing lawmakers for more extensive background checks for gun buyers and a ban on assault weapons.

“As heartsick as this makes us, we cannot and must not throw up our hands in defeat,” Henry-Crowe said. “To do nothing to combat the evils of gun violence is irresponsible and contradictory to Christ’s call to be peacemakers.”

“To do nothing to combat the evils of gun violence is irresponsible and contradictory to Christ’s call to be peacemakers.” ~ Rev. Susan Henry-Crowe

Sutherland Springs is a community of about 400 people. It has no United Methodist church, though the namesake Sutherland family included the Rev. A.H. Sutherland, an important early Methodist pastor in the area, particularly in Mexican ministries.

At Christ United Methodist Church in Stockdale, about five miles east of Sutherland Springs, word of the mass shooting came during a post-worship church council meeting.

“The word was that he was still an active shooter and he was loose,” said the Rev. Ray Perales, pastor at Christ United Methodist.

Perales and church members locked down the facility briefly. Soon, the church members headed home, but Perales went to the Sutherland Springs community center, to be a counselor.

Other local pastors were there, including Paredez of El Mesias United Methodist.

“Being supportive, that’s about all we could do,” Paredez said. “People were in grief. People were crying.”

Perales helped organize a Sunday evening prayer service for the churches of Stockdale. But he used his time as speaker to emphasize that town boundaries didn’t matter.

“Before I prayed, I just touched on the fact that we’re all a community,” he said. “Stockdale and Sutherland Springs are one and the same. Their kids go to our school district.”

He noted in a phone interview that some of the first responders were teenage volunteers on an EMT team.

“We had high school kids who had to walk into that church,” he said, his voice straining.

“We sang and prayed and read Psalm 17. When I don’t know where else to go, I go to the Psalms.” ~ Rev. Peter Aguilar

He was scheduled to offer a prayer, but had to do more when the theology student from Texas Lutheran University who organized the event was too overcome to speak.

“I kind of stepped in,” Curry said. “I talked about hope for tomorrow, that tomorrow we’ll continue to build the kingdom of God, continue to be people of faith, continue to spread the good news and not let the forces of evil and destruction get to us.”

After an afternoon of counseling at the scene, Aguilar pulled together a special evening service at Floresville United Methodist, which two years ago started a food pantry supported by First Baptist of Sutherland Springs.

Aguilar said the service gave people a chance to be together and share their anger and grief.

“We sang and prayed and read Psalm 17,” Aguilar said. “When I don’t know where else to go, I go to the Psalms.”