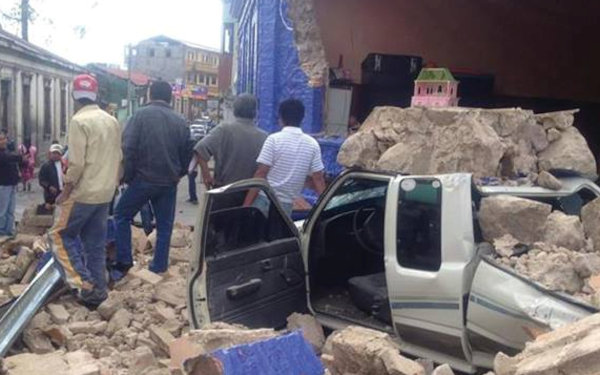 The strongest quake to hit Mexico in 100 years struck on September 7. The Mexico News Daily reports that an estimate 300,000 lives have been affected by the quake. ~Facebook/UMCOR photo

UMCOR is working with Methodists in Mexico on earthquake relief.

UMCOR is in communication with its partners in the impacted region, including the local Methodist Church, and is ready to support with relief efforts. Please pray for those surviving the earthquakes and for emergency responders.

Another earthquake struck Mexico, impacting the states Puebla, Mexico, and Morelos. At least 225 people are confirmed dead from the 7.1 magnitude quake, making it the deadliest earthquake in over 30 years. Emergency crews and volunteers worked to search the rubble of collapsed buildings to rescue trapped survivors.

A powerful earthquake struck off the coast of Mexico’s states Oaxaca and Chiapas. The 8.1 magnitude quake left at least 61 people dead and caused widespread damage to homes, hospitals, and government infrastructure.

To support UMOR’s efforts in international disaster response, give to Advance #982450.