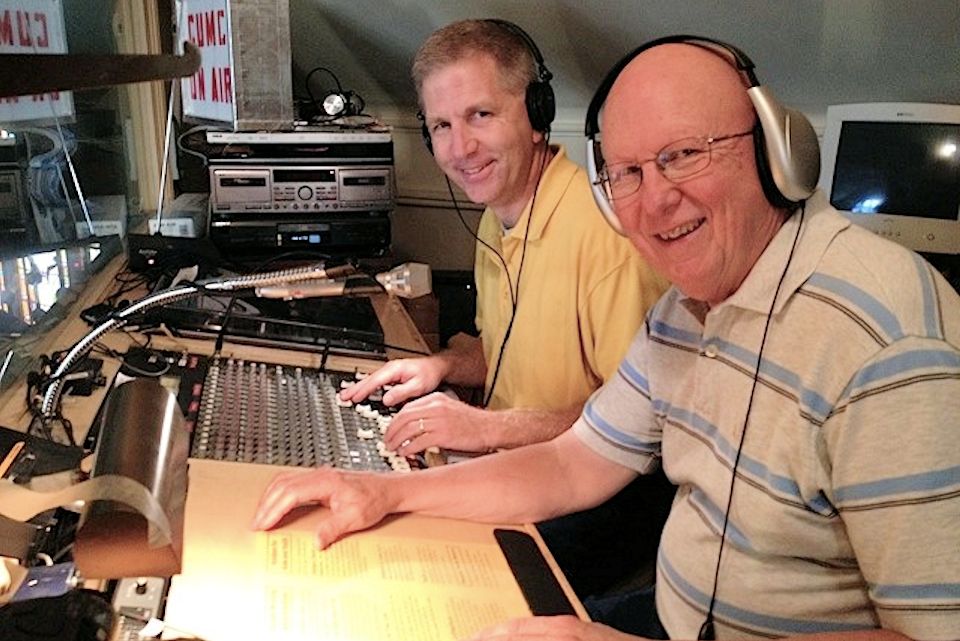 Bill Tennant (front) and Peter Hudy staff the radio booth on a Sunday in 2013. The radio ministry has broadcast decades of prayers, music, sermons, and hope from the church, situated across the street from the state Capitol, blessing members and neighbors alike. One Grand Ledge farmer told Rev. Lynn DeMoss, senior pastor from 1993-1997, that he enjoyed worshiping with Lansing Central from his tractor seat via WJIM. ~ photo courtesy Bill Tennant

Since 1924 the Word of God has been shared from Central United Methodist Church across the City of Lansing to villages and fields beyond. June 21, 2020 marks a milestone broadcast.

On Sunday, June 21, 2020, Lansing’s Central United Methodist Church will celebrate its 3,000th broadcast in a continuous series over WJIM-AM. If you do the math, the first broadcast in this series started back on December 23, 1962. This is quite a milestone in the history of Central UMC.

But as amazing as this is, when researched, Central’s first live radio broadcast actually took place 96 years ago this year on November 9, 1924 on Ransom Olds’ WREO, Lansing’s first broadcasting station. It is believed that this was the first time a church service was broadcast live in the City of Lansing, and maybe the whole state and country? Broadcasts probably continued weekly, or at least on Christmas Eve and Easter, but no records exist that can support this theory.

The current series of broadcasts was the brainchild of the then-senior minister, Dwight Large. Rev. Large turned to member Bryan Halter, who was with WJIM’s radio station, asking him to find some way to get Central’s weekly services live on the air. Halter’s Methodist church in Illinois had connected its public address system to a telephone line to feed sound from the sanctuary to the studio downtown. Through the efforts of Halter and Carl Onken, Chief Engineer at WJIM, a similar system was devised and in short order, Lansing Central was on the air each week with opening and closing announcements done by the station announcer. That was back in 1962.

Moving through the 1960s, Bryan started taping a recorded opening and close to the worship service that was played at the radio station each Sunday. David DeVinney also recalls, “I remember as a little kid, watching the WJIM engineer along the east side of the sanctuary wall, quietly announcing the service in a whisper.”

Fast forward into the 1970s, Jim Hepfer took over responsibility for the PA system maintenance, which began his involvement with the radio broadcast. In about 1972, Hepfer upgraded the equipment and a control console was constructed in the northeast corner of the balcony. The tape machine in the console started making a lot of noise in the sanctuary, which led to Marion Stutes becoming involved.

A sound booth was constructed in early 1976 with Stutes, who had extensive radio announcing experience, first being hired by Paul Harvey at WKZO, now able to begin inserting live commentary during the broadcast. Marion’s wife Leora, who at one time was one of only 11 female Qualified Radio Engineers in the United States, then started engineering for Marion in the new booth – something she did for 15 years. Quite a professional team!

At Stute’s request, Hepfer upgraded the system once again around 1978 to basically the same system there today. New equipment was added as technology changed. Beginning with a reel to reel tape deck, a cassette tape deck was added, then a CD player, with the system now having MP3 capacity. The phone line is still used to send the signal out to the radio station, but last month, the church engineer started sending out a digital signal, too. Once the digital output is tested and deemed to be working correctly, the phone line will be shut down for good. The same mixer that was installed in 1978 is still being used, and to this day, Jim Hepfer continues to take care of all the equipment.

The church’s official estimate of listeners, provided by Neilson Research, is around 400; that was before the stay-home season in which we find ourselves. Central’s reach extends far beyond mid-Michigan. Former members who live in Colorado and other states tune in regularly. And local non-members provide financial support. People from half-way around the world also log onto WJIM-AM on their laptops and smartphones and hear the worship live.

Through the years, there have been many talented church members who have contributed to the quality of the broadcasts. Thanks to all of them for their devotion and contributions to this radio ministry.  Also, a huge debt of gratitude to Bryan Halter, Jim Hepfer, and both Marion and Leora Stutes, whose efforts through the years have made the broadcast the success it is today. Central has come a long way since that very first broadcast in 1924. The broadcasts continue each Sunday morning from 10:00 – 11:00, still on WJIM-AM, 1240 on your radio dial, now reaching and serving people around the world.