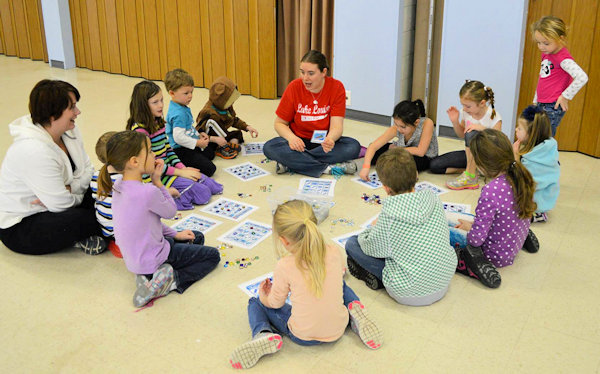 Waterford Central UMC is a church with an intentional discipleship system.

#SeeAllThePeople is an initiative of Discipleship Ministries that encourages “a relentless focus on making and growing disciples, and move away from fixing churches.”

Click here to learn about a number of models for intentional discipleship that have been submitted to Discipleship Ministries.

One of the articles was sent in by the Rev. Kathy Pittenger, Pastor of Lifelong Faith Formation at Waterford: Central UMC. Entitled, “Passion brought her this far,” the article is shared here …

Pittenger says her passion for discipleship started as a teenager at Rush (New York) UMC. “I had a fabulous Christian education director,” she said.

“In high school I had a very clear call from God to Christian education,” she said. “I went to college and Asbury Seminary for that purpose.”

She has served at Central for 11 years, her first and only appointment. She went there straight from seminary. She focuses on children, confirmation, youth programming and adult ministry.

Her church participated in the Detroit General Conference Vital Church initiative (similar to the Missouri General Conference’s Healthy Church Initiative, she said). She and her team were tasked with creating a discipleship pathway.

“We were given the task, but no resources to do it,” she said with a laugh.

They attended a conference called From Membership to Discipleship and gained some inspiration.

“We looked at our own church and came up with this grid (pdf),” she said. “Several of us on the team have backgrounds in education. We had a graphic designer who put it all together brilliantly. The grid is fairly specific to our church, but I think it is adaptable for other churches as well.”

Central started their discipleship program using the grid last September. About 60 people were in the initial group that went through the introduction. One of the first steps was to learn the language of the grid.

“Church culture is hard to change, but we have inserted this discipleship program into the whole church,” Pittenger said. “Not everyone is on board yet, but we’re making progress. It’s a process. The goal is that as we do new membership classes, this is what we do and let the new members know this is what we expect of them. It’s hard for people who have been in a church for a long time to change their expectation.”

The grid has a series of icons, describing certain aspects of discipleship.

“We use the icons in our newsletters,” she said. “We are having our people see the pattern. We even have the same pattern for the children’s discipleship program. It’s always in front of them.”

Pittenger said she emphasizes that discipleship is a lifelong process.

“If I am realistic, I see it isn’t happening quickly, but there is progress,” she said. “We are meeting the goals we set out to meet.”

She said she believes the first step is the hardest.

“I think asking people to be disciples means that something is going to change in their lives. But they don’t know how it will change, and they don’t like change,” she said. “Helping, walking with them as they take this first step is the hardest.”

She admitted it takes a while to change the church culture.

“We haven’t gotten there yet,” she said. “Discipleship is part of our language. We talk about sharing our story. It’s a very important part of our pathway – sharing our faith story. As we get more comfortable, it will become easier to make disciples.”

Central is making an effort to do more digitally enabled ministry.

“One of our discipleship groups meets entirely online,” she said. “Other classes meet at the church, but are asked to watch a video, hear a song, etc. before coming to class. And then there are the more traditional classes that meet at the church. We make it accessible to as many people as we can in as many ways as we can.”

For this passionate minister, discipleship matters. “This is about making disciples of Jesus Christ for the transformation of the world.”