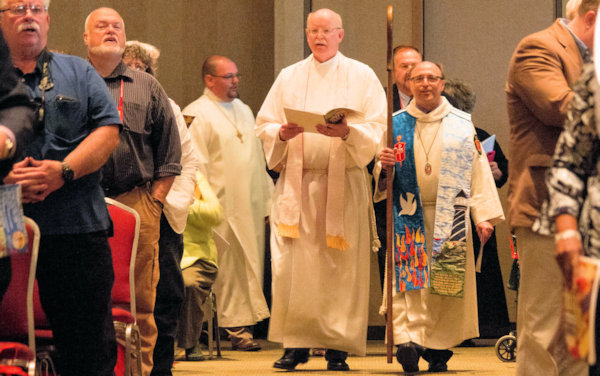 Bishop David Bard and Clergy Assistant John Boley lead the procession that opened the 2017 Annual Conference, a session that approved the steps that would orgaznize the new Michigan Conference. ~mic photo/Hannah Hazen

A year of change is always tinged with stress but for the United Methodists in Michigan 2017 was mostly about hope and promise.

In his first full year of service, Bishop David Bard did a lot of listening and leading as he oversaw the final stages of The Design Team’s plan for a new Michigan Conference.

Careful drafting of plans dominated the calendar during winter and spring. Then enthusiastic adoption of those plans took place at an historic “up north” Annual Conference.

Fall was a time of transition toward nine districts and a director model of leadership.

Here’s a month-by-month look at the highlights.

The Michigan Area celebrated the election of the Rev. Samuel Quire as bishop of The Liberia Conference.

Michigan Volunteer in Mission team went to Haiti to assist in rebuild of churches destroyed in 2016 Hurricane Matthew.

Registration opened for an historic “Up North” Annuel Conference in Acme, MI.

A 9-district concept is introduced along with an invitation to attend listening sessions with Bishop Bard.

The Rev. David Hills, chair of the Michigan Area Haiti Task Force, and others from Michigan were present in Port-au-Prince for the celebration of the 200th anniversary of the Methodist Church in Haiti and the certification of 115 local preachers graduated from the Local Preaching Academies organized by The Task Force.

The 17-month partnership between UMCOR and the Crossroads District drew to a close. Greg Timmons continues as Coordinator of Flint Water Recovery.

Detailed proposals of every aspect of the life of the new Michigan Conference became available online as members prepare for the upcoming Annual Conference.

The Michigan Area celebrated the life of the Rev. Dr. Robert C. Smith who died April 29. After retiring from service in the West Michigan Conference, Smith was a global ambassador for The United Methodist Committee on Relief.

Cass Community Social Services hosted a progressive tour of six of the 25 Tiny Homes that will rent-to-own by Detroit’s homeless. The Rev. Faith Fowler spear-heads the $1.5 million project. The first residents moved into the houses in October 2017.

Bishop David Bard presided over his first Annual Conference. After two years of work since “Count Day,” June 10, 2015, members approved, without amendment, the 38-page Plan of Organization for the new Michigan Conference. The action enabled full forward movement toward making changes necessary to birth the Michigan Conference on January 1, 2019.

After a nation-wide search, the Board of Michigan Area United Methodist Camping elected the Rev. George Ayoub as their Executive Director.

The Rev. Robert Sieh, Director of the Bishop Judith Craig Children’s Village in Liberia, visited Michigan to express gratitude for support for the orphanage. The 2017 Annual Conference contributed $23,450 to the ministry.

Two Haitian women were commissioned as Global Mission Fellows of the General Board of Global Ministries. Lynda Sylvan and Grace Okerson then began ministry in Michigan as US-2s. They serve Motown Mission and NOAH Project in Detroit respectively.

Michigan United Methodists spent a week in intentional prayer for the work of the Commission on A Way Forward as part of a broader initiative umcprays.org.

Michigan United Methodists participated in a monumental disaster relief effort in support of clean-up after Hurricanes Harvey, Irma and Maria blast the southern U.S. and Puerto Rico. Cleaning Buckets and Hygiene Kits were collected at nine sites around the state and trucked to Midwest Mission Distribution Center with the help of Corrigan Moving.

Bishop Bard invited the Area into dialogue around issues of human sexuality. The context for this “Weaving the Future: connectional conversations” is engagement with the work of The Commission on A Way Forward.

Bishop Samuel Quire visited the Michigan Area. He met with the Michigan Liberia Task Force to share his vision for the Liberia Annual Conference.

Discipleship Ministries announced that the Rev. Anna Moon, TroyHope, is a member of the Hymnal Revision Committee.

National Justice For Our Neighbors met in Detroit for their annual roundtable. Kirstin Huhtala Karoub, Dearborn Clinic, was honored as National JFON Volunteer of the Year for 2017.

Ruth Jones received the Francis Asbury Award, conferred by the General Board of Higher Education and Ministry for exceptional support of campus ministries, during ceremonies marking the 50th anniversary of Wesley at CMU.

Bishop Bard invited clergy and laity to suggest names for the nine districts of the new Michigan Conference. None of the names of the current 12 districts will be retained.

A $100,000 grant from UMCOR opened a Flood Relief Office in Midland and hired two case workers, Katie Vokal and Anne Wortley, to assist survivors of the June deluge in mid-Michigan.

Justice For Our Neighbors of West Michigan and Southeastern Michigan announced they will unite as JFON-Michigan on January 1, 2018. A new director is being sought.

Bishop Bard shared details—boundaries and lists of churches—for the nine new districts of The Michigan Conference.

The Rev. Faith Fowler traveled to Puerto Rico to deliver 50 Solar Powered Generators for use by survivors of Hurricane Maria. The generators were built by homeless persons employed by Cass Green Industries in Detroit.

The West Michigan Conference Center at 11 Fuller Avenue SE in Grand Rapids was decommissioned after more than 50 years as home to Methodist Ministries in the region.

It was announced on December 5th that the Rev. Kennetha Bigham-Tsai  has been named the Chief Connectional Officer of The United Methodist Church. She leaves her role as Lansing District Superintendent on January 23, 2018 to head the Connectional Table, based in Chicago.

The Treasury and Benefits Office of the Michigan Conference relocated to Clark Corners in Lansing.

Announcement was made that the 2018 Michigan Annual Conference will take place at Grand Traverse Resort May 31 through June 3. The theme is “Engage With” and registration will open in February, 2018.

A favorite hymn reminds, “ In the bulb there is a flower, in the seed an apple tree.”

It was a year of decision, of finally making the commitment to live together in a new way.

In 2017 visions and concepts on paper took shape in real time and space. It was a year to nurture seeds, planted two years before, toward growth and maturity.

By the end of 2017, fruit started to blossom with the naming of leadership. That fruit now promises to ripen further as additional staff are hired and districts organize in the early months of 2018.

Six months from now, July 1, 2018, this team of core leaders will fully engage with Michigan United Methodists in the Christ-centered work that will birth the Michigan Conference on January 1, 2019