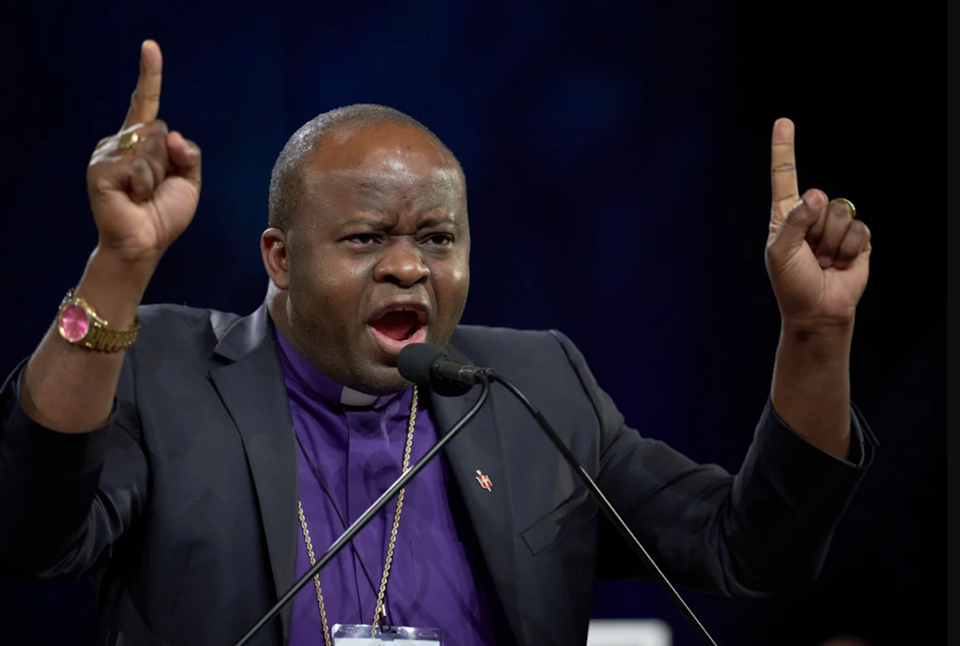 Bishop Mande Muyombo speaks during the 2019 United Methodist General Conference in St. Louis. Muyombo was the keynote speaker for the April 28-May 1 meeting of Black Methodists for Church Renewal, which was held online. UM News file photo/Paul Jeffrey

The meeting was held virtually April 28-May 1 and featured speakers from the African American Heritage Center, Africa University, Black Clergywomen of the United Methodist Church and many of the denomination’s general agencies.

Bishop Mande Muyombo delivered the keynote speech. He leads the North Katanga Episcopal Area, which includes United Methodists in parts of Congo and in Tanzania. He focused on the relationship between African and African American United Methodists leading up to General Conference. The United Methodist Church’s top lawmaking assembly — now scheduled for 2024 — faces multiple proposals for separation over LGBTQ inclusion.

“I’m calling upon Africans and African Americans to build stronger relationships and work together in their quests for racial equality and ending colonialism,” Muyombo said.

“The political war that has been burning for decades within The United Methodist Church in the USA is increasingly doing great harm to the communities I’ve made a sacred vow to serve across the African continent,” he said. “Colonial mercenary tactics are being used with the aim of destabilizing our conferences and exploiting our worth of delegate numbers to win power and property at our denomination’s next General Conference.”

The relationship between racism and colonialism should push United Methodist Africans and African Americans to draw closer and work together strategically, Muyombo said.

The Rev. Herbert R. Marbury, associate professor of Hebrew Bible at Vanderbilt Divinity School, presented two impassioned Bible studies tied to the meeting’s theme, “We Are Strong. We Are Relevant. We Are Here.”

Black United Methodists should choose “us,” he said.

A vital step to do this is coming up with the questions that matter to Black United Methodists about the future of the church, and asking them.

“We’ve been here for 238 years and we’re still here,” he added. “We’ve watched our churches close because of the decisions of folk who cared nothing about the Black church. … We’ve seen the property that our forbearers worked so hard to acquire sold without our consultation, and we’ve all seen the proceeds that never seem to return to the Black church.”

During one presentation, Marbury shared the story of Harry Hosier, a Black Methodist preacher “who spread the Gospel like wildfire” in the latter half of the 18th century and “was more effective than any of his counterparts, both white and Black.”

Hosier was repeatedly denied ordination, “suffered a breakdown and he died a broken man,” Marbury said. Hosier was “rejected so many times after having invested so much of himself to build American Methodism,” he added.

During a speech on the theme “We Are Here,” she said, “We are queer, we are gay, we are lesbian and straight, and yes, we are here.”

Near the end of her presentation, she said, “We are here until God tells us otherwise, or Jesus comes with his kinky hair and a long, loud shout.”

Plans are to hold next year’s meeting in-person in Pittsburgh on April 13-16.