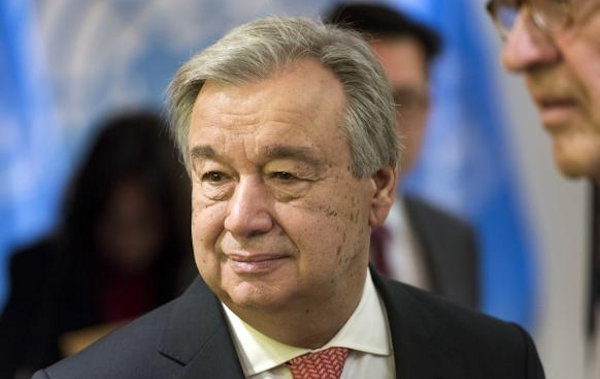 António Guterres awaits his Dec. 12 swearing-in ceremony as the ninth secretary-general of the United Nations. United Methodists are among the signers of a letter congratulating him and calling for a new focus on peacebuilding. ~UN photo/Mark Garten

United Methodists are among the dozens of heads of non-governmental organizations welcoming the new leader of the United Nations with an appeal for a stepped-up U.N. role in negotiating peace around the world.

A Jan. 16 letter organized by InterAction — a coalition of 180 faith-based and secular groups concerned about poor and vulnerable people — asks António Guterres to re-establish the world body as “an impartial peace broker” and to do more to build trust among member states.

“InterAction’s letter expresses many of the aspirations of our church and its mission activities,” Kemper said. “We are in agreement with the appeal for greater efforts to protect civilians in situations of armed conflict and to promote freedom from fear and deprivation and gender equality.”

Global Ministries has personnel, projects and partners in more than 125 countries. The mission agency’s U.N. liaison office shares many of its humanitarian goals, notably in the areas of migrant and refugee services, poverty alleviation, and justice and liberation.

The Board of Church and Society has been active in the U.N.’s multilateral work for decades, Henry-Crowe said. “We strongly believe in the power of the United Nations to be a broker of peace and a catalyst for international cooperation, and the incoming secretary general’s record of statesmanship leaves us hopeful that we will see advancements in our shared priorities of peace, human dignity and equality.”

Guterres served for 10 years (2005 to 2015) as the U.N. High Commissioner for Refugees and, as such, is familiar with the work of InterAction. He is a former prime minister of Portugal. The letter praised Guterres for a strong statement to the U.N. Security Council on Jan. 10 about current threats to human rights.

Support for institutions that build peace among peoples and nations “is deeply grounded in United Methodist polity” and the understanding “that Christ is our peace,” said the Rev. Liberato Bautista, who heads Church and Society’s U.N. office.

“In places where there is breach of the peace — if not breakdown of societies because of injustices — the concert of nations and the consort of civil society, including churches, is vital especially in the safeguarding of humanity,” he added.

In closing, the letter expresses the hope that Guterres’ leadership at the U.N. “will mark an era of true action” toward peace and sustainable development.