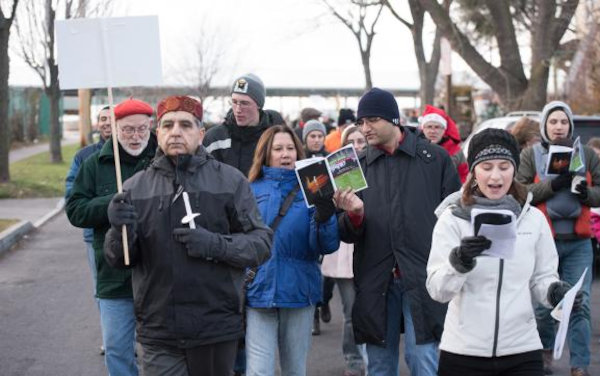 Faith and other communities from throughout Rochester, New York, came together for the second annual City Sing in December 2016.~photo courtesy Asbury 1st UMC Rochester NY

A congregation decides to move beyond the traditional carol singing and finds harmony in community.

In late 2015, Asbury First United Methodist Church in Rochester, New York, had a conversation about caroling as a congregation. Church members thought it would be fun to get together and walk through the neighborhoods surrounding our church to spread a little Christmas cheer.

Talking more, Asbury First members decided it would be more fun with a bigger group and thought of inviting other churches to join the caroling. As the conversation turned to considering the brokenness and violence in the community, the planners decided it might be even better to invite everyone in Rochester to participate.

The result was the first annual “City Sing for Peace and Unity,” an ecumenical and interfaith event in which more than 50 people from all over the city gathered to sing throughout a local neighborhood. While the choice of music shifted from Christmas carols to songs of peace from Christian, Jewish, Muslim, Hindu, Buddhist and humanist traditions, there was no doubt about the presence of the Holy Spirit.

United Methodists have long known the power of a song. As voices lift and join together, the Spirit becomes apparent in a new way. Sometimes those “sighs too deep for words” find expression in voices raised in harmony. Even when individual voices fail to land on the right pitch, the gathered community makes the tune apparent.

The key to harmony, however, is to have different people singing different parts of the same tune. In the case of City Sing, the tune was peace on earth — something every tradition can get behind.

The second annual City Sing event in December 2016 drew a different group of people who walked through a different neighborhood, but the Spirit was the same. The songs came from far-ranging traditions with far-ranging meanings to the various generations gathered. The evening ended with a candlelight vigil in which we all sang “We Shall Overcome” – and those singing believed it.

Here was a church leading a group of people from different faiths in the same song of hope. In the end, it didn’t matter if you could sing or not because the gathering itself was a kind of song.

Asbury First and other churches have thought about how to make churches more diverse — or at least more reflective of their communities. Asbury First has worked hard on that. From making it clear that the congregation is open to all people regardless of any distinguishing characteristic — age, ethnicity, gender identity or sexual orientation — to ensuring that the committees and leadership reflect those commitments, it has acted.

In the end, however, the lesson of City Sing is that if churches want to be more reflective of their communities, they have to be in the community. Congregations have to invest in community partnerships with people who, though they may not look like most of the members or believe like them or think like them, have the same commitment to those timeless issues of the human spirit that drive all. The good news is that if we can somehow get those different voices singing the same tune together, the harmony becomes apparent — and so does the Spirit.

As the old hymn puts it, “Since Christ is Lord of heaven and earth, how can I keep from singing?”