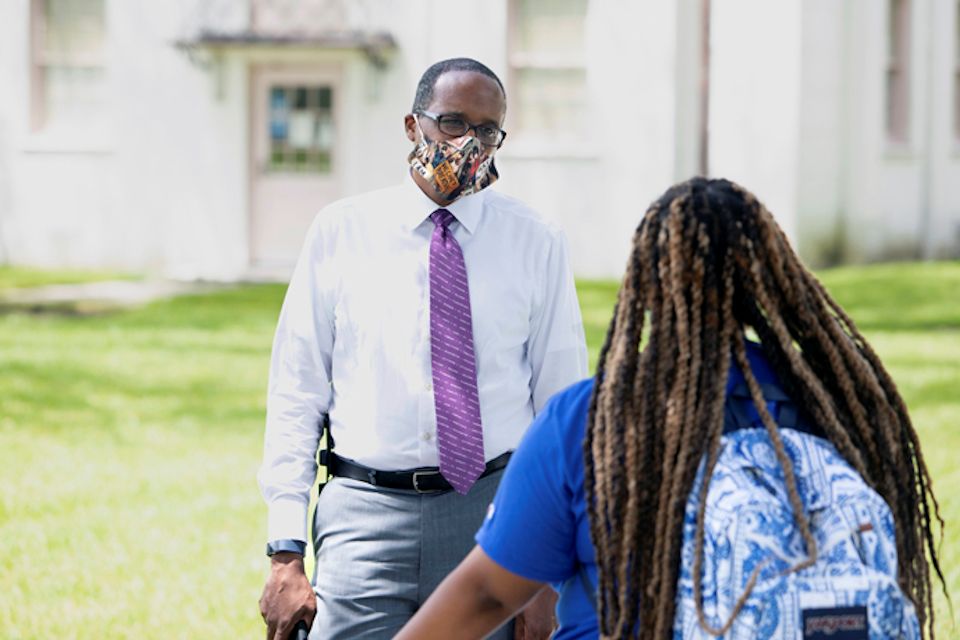 The two church members pictured, Dillard University President Walter Kimbrough and pediatrician Dr. Ted Atkinson, were lifted up as role models for the children because they are participating in a COVID-19 vaccine study at Ochsner Medical Center in New Orleans.

Mistrust of the medical community has resulted in a shortage of African Americans willing to be research subjects. This could undermine the effectiveness of any vaccine developed to fight the coronavirus.

“Everybody in the world is suddenly connected,” Anglim said in an interview with United Methodist News. “We all need this vaccination, and we need our medical community to develop it.”

Kimbrough and Atkinson inspired Anglim, who is white, to also volunteer to test the vaccine.

In a joint open letter to the communities of Dillard and Xavier University of Louisiana, Kimbrough and Xavier President C. Reynold Verret appealed to students, faculty, and staff to consider participating in the study.

“The people and communities we serve look to us as an example,” the two leaders said in the Sept. 2 letter.

Kimbrough said Verret recruited him to participate in the study.

“He said we could encourage people, because … some scientists are concerned that any vaccine that’s developed might not be effective on African Americans, who are disproportionally impacted, given that they haven’t been tested on them,” Kimbrough said.

Some African American people don’t trust medical researchers, and there are understandable reasons for that, he said.

“There are plenty of historical examples of mistreatment, ethically problematic cases of treatment bias and mistreatment of African Americans,” Kimbrough said.

The first thought some Blacks have in response to requests to participate in a study is the Tuskegee Syphilis Study, said Dr. Claude Tellis, a retired doctor and member of Camphor Memorial United Methodist Church in Baton Rouge, Louisiana. From 1932 to 1972, the effects of syphilis were studied in Black men at Tuskegee Institute in Alabama. The men were told they were being treated, which wasn’t true.

Tellis, who co-chaired a forum with Ochsner Medical Center to encourage people in the Black community to participate in the vaccine trial, said there are other examples, too.

There is J. Marion Sims, a 19th-century doctor who was honored with a statue in Central Park in New York. The “father of gynecology” performed surgical experiments on enslaved black women without using anesthesia. The statue was removed in 2018.

More recent is the use of cancer cells from the late Henrietta Lacks, a Black woman who died in 1951 of cervical cancer. The case was widely publicized by a 2010 book, “The Immortal Life of Henrietta Lacks.” For unknown reasons, Lacks’ cancer cells endlessly reproduce under certain conditions, making them useful for research. The cells were used without her consent and neither she nor her family received any compensation.

As recently as this September, an investigation was announced by the Department of Homeland Security into a whistleblower’s claim that federal immigration detainees in Georgia were given gynecological surgeries including hysterectomies without their informed consent.

“That just makes everything worse,” Tellis said. “That would be the kind of thing that would keep people from participating in studies.”

Derek Griffith, professor of medicine, health, and society at Vanderbilt University and founder and director of its Center for Research on Men’s Health, said a 2005 study found that the facts of Tuskegee might be less important than the modern everyday experiences of Black people with the health care system.

“A lot of times when we talk to men about why they don’t go to the doctor, it’s recent bad experiences when going to the doctor,” Griffith said.

Some Black people stricken with the coronavirus are suspicious they aren’t being treated equitably compared to other COVID-19 patients, he said.

“If someone were terminally ill, is there a racial difference in who was going to get ventilators?” Griffith said. “There were lots of stories (about) people getting turned away earlier in the virus when they weren’t symptomatic or there were limited tests that invariably seemed to be looked at through a racial lens.”

A 2001 study, “Unequal Treatment: Confronting Racial and Ethnic Disparities in Health Care,” found that Black people get subpar medical treatment and have worse outcomes than whites.

“Even after controlling for access to care, insurance, and location, minorities got lower quality care in the health care system,” Griffith said. “That’s been a consistent fact that’s been known and documented for at least 20 years.”

In their letter urging participation in COVID-19 studies, Kimbrough and Verret pointed out that “today there are many regulations in place to assure the ethical execution of medical studies, including oversight by human subjects’ committees with diverse membership and participation of clinicians of color.”

Kimbrough said his first meeting as a study participant was three hours of orientation explaining how the study works.

“You spend an hour and a half going through tests and reviewing a video and all that,” Kimbrough said. “They keep saying that any time you want to stop participating, you can.”

“It’s a problem and the medical community has got to continue to work with historically Black colleges and universities, Black churches, Black civil rights groups, and Black political leaders to really have more of these conversations.”