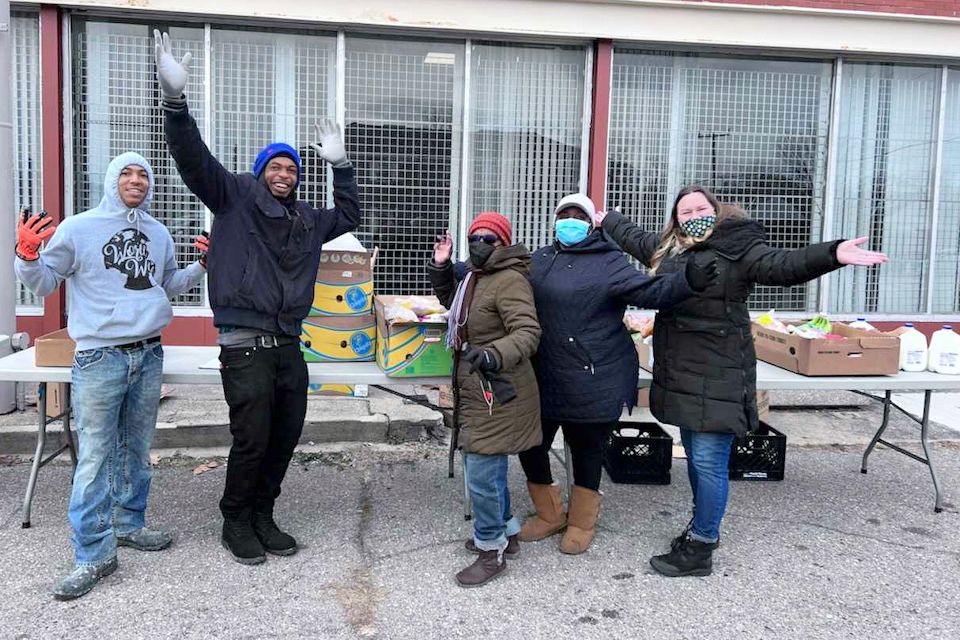 That awesome feeling you get when you connect with your neighbors! These volunteers distributed 30 Holiday Baskets to flood survivors and others with the help of Brightmoor Connection Food Pantry. ~ MIconf photo/Cheryl Tipton

Two UMCOR-trained disaster case managers are now engaging with neighbors in Detroit. Funds are being sought for assistance for survivors of flooding in June 2021. Six months later, people suffer.

December 8, 2021 | DETROIT — Heavy rains soaked the southeastern part of the state in late June 2021, flooding parts of the area for the third time in seven years. The Michigan Conference and Greater Detroit District mobilized to help. UMCOR Cleaning kits were soon in the hands of those working on site. Volunteers from local United Methodist churches assisted with mucking out at seven United Methodist churches that suffered damage. An appeal went out to churches for gifts to the Michigan Conference Disaster Response Fund.

Today, almost six months later, Cheryl Tipton and her colleague, Linda Staley, stand ready to assess need and coordinate help with neighbors whose basements are still moldering or who are using space heaters to deal with the cold of winter.

Tipton, a “veteran” case manager who has served through three floods in Detroit since 2014, says, “Just because you don’t see devastation doesn’t mean it’s not still going on. When there is a tsunami, you see it. When there is a tornado knocking down houses and uprooting trees, you see it. Where there is a fire, you see it. But when there is mud in the basement, you don’t see it.” Suffering continues in Detroit, and Tipton and Staley are simply waiting on funding before beginning the intake process to help survivors move forward to full recovery. In the meantime, they are letting people know “we are out here getting ready to help.”

Tipton and Staley were trained by UMCOR in 2015 when they became members of the Northwest Detroit Flood Recovery team. Tipton served again in 2019 when 3,000 homes in Dearborn were flooded. Then, on August 16, 2021, Cheryl was hired as the Greater Detroit District Disaster Recovery Manager. Linda came back on board in late November. Both have already heard from homeowners they served in the past, whose basements flooded again this summer.

Bishop David Bard has issued an Advent Appeal for Disaster Response. Online gifts may be made here. Contributions will be divided 40% for disasters in the U.S., 40% for international disasters, and 20% for Michigan disaster recovery.

Tipton estimates that the number of households needing assistance – mucking out, sanitizing, mold remediation, replacing a furnace or water heater – is higher than in 2015 and 2019. “But we won’t know that until we start talking to people this month.” Some householders had insurance that aided their recovery. Others had friends or family who could assist in clean-up. When case management begins, the needs will become more apparent.

She reports that some people who lost their furnace or boiler in June have bought space heaters that move room to room. They are using their ovens to heat the kitchen while cooking. Water is boiled on the stove for bathing and washing. But, Tipton adds, “When it gets real cold, there’s only so much you can do with a space heater.”

Seven United Methodist churches suffered losses and damage in the June flooding. Tipton shares that Resurrection UMC installed their new water heater and furnace two weeks ago. Second Grace UMC installed a boiler in early November. Needs at Detroit Metropolitan UMC have also been met. Cass Community UMC is still getting things back together. Beverly Hills UMC and Resurrection UMC still need painting and some rebuilding. Skilled volunteers may be needed in 2022. Persons with drywall, painting, or other skills, may contact Cheryl Tipton to offer their services after the first of the year. ctipton@michiganumc.org or 248-520-5501.

At the outset of the disaster response, the Greater Detroit District appealed for Cleaning Buckets and supplies. Brighton First, New Baltimore Grace, Ferndale First, Rochester St. Paul’s, and Hartland UMCs were among those responding. The supplies are housed at the Ellison Center at Second Grace UMC, where the case managers have their office. Midwest Mission Distribution Center in Pawnee, IL, will send a truck to pick up the supplies that will restock their shelves for the next disaster.

On December 7, Tipton and Staley collaborated with Brightmoor Connection Food Pantry to provide holiday baskets. Thirty individuals and families received groceries. “It was so frigid,” says Tipton, “that we didn’t ask people to get out of their cars. We just loaded them.” She gives special thanks to the Rev. Roslyn Bouier, Executive Director of Brightmoor Connection, for assisting flood survivors and others.

A film producer will arrive at Resurrection UMC on December 9 to interview three flood survivors for a documentary on how climate change impacts flooding in southeastern Michigan. Two of the persons were Cheryl and Linda’s clients in 2016, who flooded again in June of 2021.

Cheryl Tipton says of those facing calamity once and twice, “We just want people not to lose hope! There’s help out here!” She is glad to be back with the same partner, saying, “Linda is caring, compassionate, and very resourceful. We both want to start direct assistance.”

Cheryl concludes, “Let’s face it. It’s not if another flood comes but when. And I hope that response can come more quickly so people can recover sooner. Just turn your heat off for one day right now or even an hour. You will soon realize what flood survivors in Detroit are going through daily.”