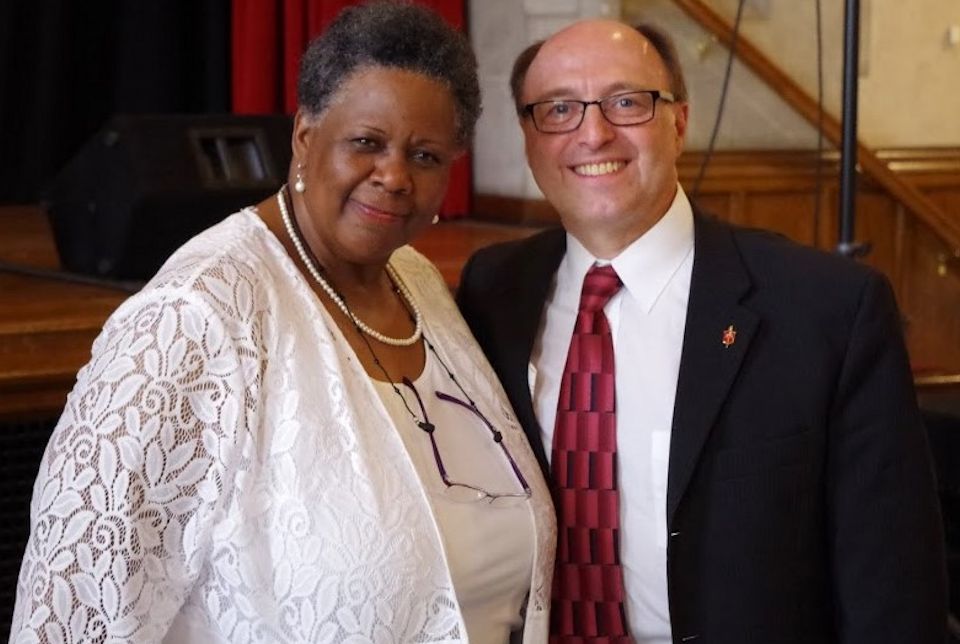 Bishop David Bard pays a visit to Metropolitan United Methodist Church in Detroit on their Scholarship Sunday. The Rev. Janet Gaston Petty served the church as an associate pastor from 2002-2004 and returned as senior pastor in 2016 before retiring, a second time, in 2021. ~ photo courtesy Jeanette Harris

She was the first African-American woman to be ordained an Elder in the Detroit Conference of The United Methodist Church. Meet the Rev. Janet Gaston Petty.

Her sense of the call to ministry began during her years as a student at Adrian College, where she now serves as a member of the Board of Trustees. Janet was home in Detroit for a weekend when her pastor at Scott Memorial United Methodist Church, the Rev. Don Scavella, called her into his office and asked, “Did you ever consider going into the ministry?” Janet says, “I laughed because I had no role models of women serving as pastors.”

Scavella recommended Janet go to Scarrett College in Nashville, which she did, planning to major in Social Work. But a life-changing experience in a student prayer meeting convinced her of her calling toward ordained ministry.

She graduated from Scarrett in 1977 and applied to Gammon, part of the Interdenominational Theological Center in Atlanta. At that point, she said, “I prayed, ‘Lord if you are really calling me, I‘ll be accepted in seminary, and you’ll find the money!’ and at every step along the way, God confirmed my call.” She was ordained as a Deacon in 1979 and as an Elder in 1982.

Another influence in Janet’s life was the Rev. Tom Robinson. She says, “Tom came to Scott Memorial Church as a Summer Intern when I was nine years old, and ever since then, he has continued to play a significant part in my journey.” Her experience confirms the value of programs like the student intern program and the importance of childhood experiences that plant the seeds of faith in the lives of children.

Janet’s first appointment found her in a very supportive congregation at St. James United Methodist Church, but in her second appointment, a person said, “I don’t believe you, as a woman, should be here.” Six years later, when she left the church, he said, “I still don’t believe women should be ministers, but you did the job.” Out of that experience, Janet advises young clergywomen, “Don’t spend a lot of time focusing on what people think.  Just show up and do the job.”

In those early years, she credits the few clergywomen already in the conference, especially the Rev. Carol Johns and the Rev. Juanita Ferguson, with providing the encouragement she needed to go on whenever she heard, “Oh … so you’re the pastor.”

She went to the California-Pacific Conference from Detroit to serve on the staff at Wilshire United Methodist Church in Los Angeles. The church had five associates, including Latino, Korean, and Filipino, but again, she was the first African American woman to serve there. When a well-meaning church member said, “I don’t see you as colored,” she responded, “Then you don’t really see me.” She views that attempt at being “color blind” as evidence of the hidden racism in the church, which fails to recognize and honor persons of color for who they truly are.

The Rev. Gaston Petty again confronted racism when she was serving a predominately black church and ran into stiff resistance to the idea of including Latino members in the congregation’s ministry. Yet, she was able to bring the congregation together in the creation of a “Shalom Zone” ministry for children and adding a new worship service.

At that time, California Bishop Mary Ann Swenson asked her to serve as a District Superintendent, but due to her mother’s declining health, it was important for her to come back to Michigan, and Janet was appointed as the Associate at Metropolitan UMC in Detroit. That was followed by an appointment to Commerce UMC, one of the first cross-racial appointments in the conference, and then she served eight years at Hope UMC in Southfield.

Janet retired in 2012, and she says, “I was happily minding my own business” when the call came to return to Metropolitan for a 6-month interim, which turned into five successful years as the Senior Pastor of one of Michigan’s great churches.

Along the way, Janet founded the “Journey with JGP,” a multi-cultural coaching and spiritual formation ministry for women, and created innovative ministries in every church she served. But, most importantly, she has followed her own advice– “She showed up and did the job,” even when there were folks who said, “Oh…so you’re the pastor.”

The Rev. Janet Gaston-Petty retired (for the second time) in 2021 and moved to her home in Georgia, where she says, “I’m relaxing. I swim every day, but I am still coaching clergywomen and mentoring young clergy, still trying to be faithful to the call to ministry.”