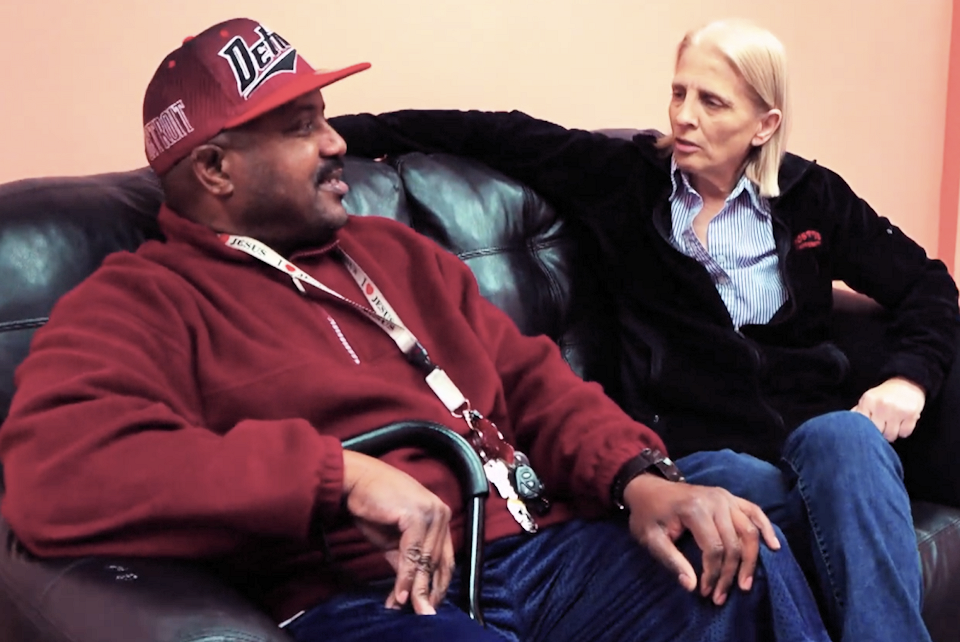 She is a United Methodist pastor, not a real estate mogul, but Faith Fowler has given birth to a vibrant Tiny Home community. She chats with one of her neighbors. ~ umcom video image

A video produced by United Methodist Communications shares the dreams of a creative Architect for God, the Rev. Faith Fowler, pastor of Cass Community UMC in Detroit.

Under the leadership of United Methodist pastor Faith Fowler, Cass Community United Methodist in Detroit, Michigan runs an outreach that draws 7,000 volunteers a year. Fowler has been called a visionary, but she says the work here is God’s vision at work in her life and the lives of others.

The Rev. Faith Fowler, Cass Community United Methodist Church: “I got a call one day and this woman said, ‘Hi, I’m calling from Bon Jovi’s office. She said, Do you know who Bon Jovi is? And I said, ‘I’m a minister; I’m not dead.’ And Bon Jovi sent 100,000 dollars.”

Through Fowler’s vision and leadership over 25 years, Cass United Methodist has built stability and community among residents of Detroit. The latest enterprise is 25 tiny, affordable homes.

The Rev. Faith Fowler: “We have a Tudor, a lighthouse, a modern house, a recycle house. They’re all very attractive on purpose. And after 7 years…7 is a good biblical number, right?…then they own it. It’s theirs.”The Cass Community “tiny town” has a green gym, clinic, store and jobs all within walking distance. Fowler sold her home to live here.

The impact of these ministries is clear but Fowler’s gifts of leadership were not always apparent.

The Rev. Faith Fowler: “So, I was in junior high. I felt the call of God. And, I went to see the associate pastor at our church and told him. And he told me I was wrong. Everybody always assumes he told you you were wrong ‘cause you were a woman. I don’t know that that’s true. I was a very introverted kid. Maybe he thought I just didn’t have what it took to be a preacher/teacher/leader.”

Fortunately, Fowler didn’t give up on The United Methodist Church or her call.

The Rev. Faith Fowler: “I believe everybody has gifts and graces that should be used. That great theologian Mark Twain says there are two really important days in your life: the day you’re born and the day you figure out why. That everybody’s here for a reason.”

For 25 years, Fowler has been helping this congregation find innovative ways to keep doing ministry in good economic times and bad. For example, in 2008, Cass turned their 125-year-old church into a haunted house to raise money for homeless ministries.

(Man says) “If it wasn’t for this church, I’d probably still be selling drugs.”

Fowler says Cass Community United Methodist started doing outreach 100 years ago during the Great Depression and Cass has what it takes to serve Detroit for another 100 years.

The Rev. Faith Fowler: “I figure by the time I retire that at least 35 people will own their homes. And that feels pretty good.”

An Open House showcasing the six recent Tiny Home Builds will be held August 30, 31 and September 1. Click here to reserve your place in the tour. Faith Fowler has written two books: Tiny Homes in a Big City, about the logistics and decisions behind the Cass tiny home project, and This Far By Faith: Twenty Years At Cass Community.