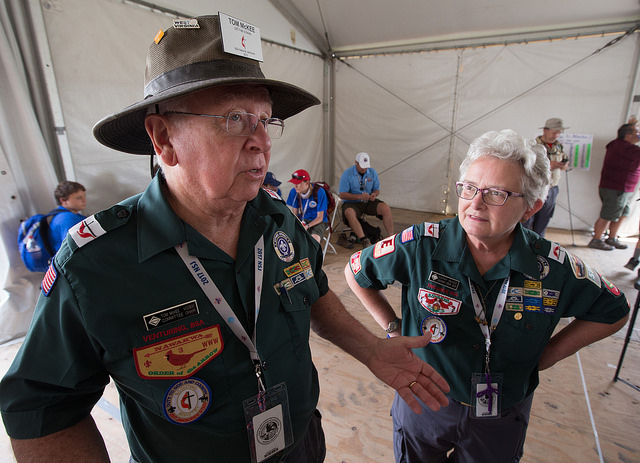 A Boy Scout reflects on United Methodist support for Scouting and about the Scout oath.

To be honest (which is expected of a Boy Scout) I wasn’t a Scout for very long.  I made it through Cub Scouts and barely made it into Boy Scouts when the Troop pretty much disbanded for lack of leadership and when it reorganized, I didn’t sign up again.  It’s not much, but I hope it is enough for me to take pride in being a Boy Scout.  Here’s the proof:

As with so many old photos, I can’t tell you which twin is me…one or the other, I’m a Boy Scout!

I also take pride in the fact that every church I served as pastor was a sponsor for the Boy Scout Troop in our community.  It was a joy to sign the paperwork each year affirming our on-going relationship.  United Methodists are the second largest sponsor of Boy Scouts in the nation and this week 3,500 United Methodist Boy Scouts are attending the Scout Jamboree in West Virginia.  Of the 85 official chaplains at the Jamboree, 15 are United Methodists and West Virginia’s Bishop Sandra Steiner Ball presided over the UM Holy Communion service at the Jamboree this weekend.

So I suppose that is why I was so deeply troubled by the speech by President Trump which included what I consider to be inappropriate language for a youth event, the booing of a former American President and bragging about the jet set crowd he hangs with.  Couldn’t he simply come and honor the traditions of the Scouts, the role they play in our communities and what Scouting means for our nation without descending into partisan politics and negative behavior?  Just for the sake of 40,000 youth, couldn’t he clean up his language?  The fact that his personal life falls far short of the Boy Scout law shouldn’t keep him from coming to the Jamboree, but couldn’t he rise above some of that for just this one event?  This may be the only opportunity many of these 40,000 youth will ever get to see a President in person and what impression will he leave?

Back to the positive…I give thanks for men and women who are willing to give their time and energy to Scouting; men and women who “do their best to do their duty to God and country”;  men and women who try to model the Scout law to be “trustworthy, loyal, helpful, friendly, courteous, kind, obedient, cheerful, thrifty, brave, clean and reverent”. I regret that our President doesn’t do the same, but fortunately these faithful men and women who live that covenant day in and day out will have a more lasting impact on the lives of our young men than this one speech.  Their lives will be shaped by the examples of their Den Mothers, Pack leaders, Scoutmasters and the experiences they share with them.  And hopefully one day one of them, like former Boy Scouts Ford and Obama, will be the President of the United States and will carry those values into the Oval Office with them.

Be prepared. Do a good turn daily.