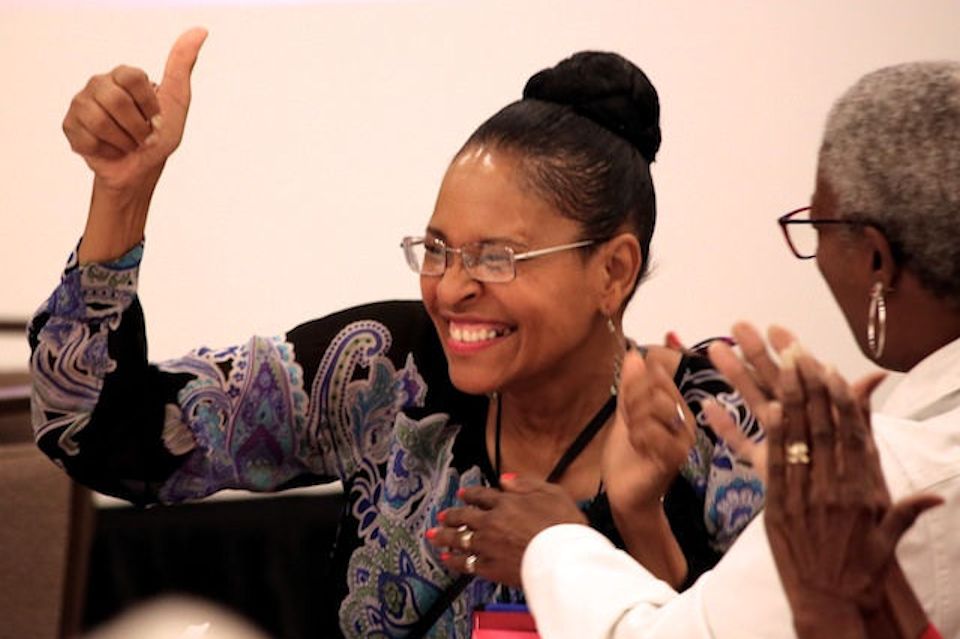 Ruby Anderson was first elected to the National Board of Directors of The United Methodist Women at the North Central Jurisdiction event held in Grand Rapids, MI in 2016. ~ mic photo/Mark Doyal

Jurisdictions are voting online to elect leaders to the National United Methodist Women, who will serve for the next four years.

In a typical quadrennium, untouched by a pandemic, the National UMW elects its 25 Directors at a series of events held across jurisdictions of The United Methodist Church. This year the North Central Jurisdictional event was to have been held in Sioux Falls, SD, June 26-29.

Due to health and safety concerns, that event was cancelled. NCJ President of UMW, Rita L. Smith, announced on May 23, “The work of the United Methodist Women continues, and as such, we will be having elections via remote communications for our Board of Directors this summer.”

The North Central Jurisdiction is the first to complete their voting online. They have released the results of balloting at that ZOOM meeting held on July 10. Those elected will serve 2021-2024.

Ruby Anderson, laywoman from Detroit, was among the four persons from the NCJ elected to the National Board of Directors. Others include Krishna Heyward (Indiana), Dawn Armstrong (Dakotas), and
Roxie Hutshell (West Ohio). This is Anderson’s second term on the National Board.

The July 10 balloting also elected the nine-member North Central Jurisdiction UMW Leadership Team that will serve for the next four years. Three from Michigan will serve on that team: Marchelle (Micki) Phelps as President, Pat Bostic, Vice President, and Simmie Proctor, Chair of Nominations. Phelps will also serve as a UMW Director by virtue of her role on the Jurisdiction.

Congratulations to these leaders. And thanks to Taylorie Bailey, whose tenure as a Director ended. Also  to Suzanne Hewitt, who held a position on the UMW Program Advisory Group during the quadrennium just ended.

United Methodist Women is the largest denominational faith organization for women with approximately 800,000 members whose mission is fostering spiritual growth, developing leaders and advocating for justice. Members raise up to $20 million each year for programs and projects related to women, children and youth in the United States and in more than 100 countries around the world.