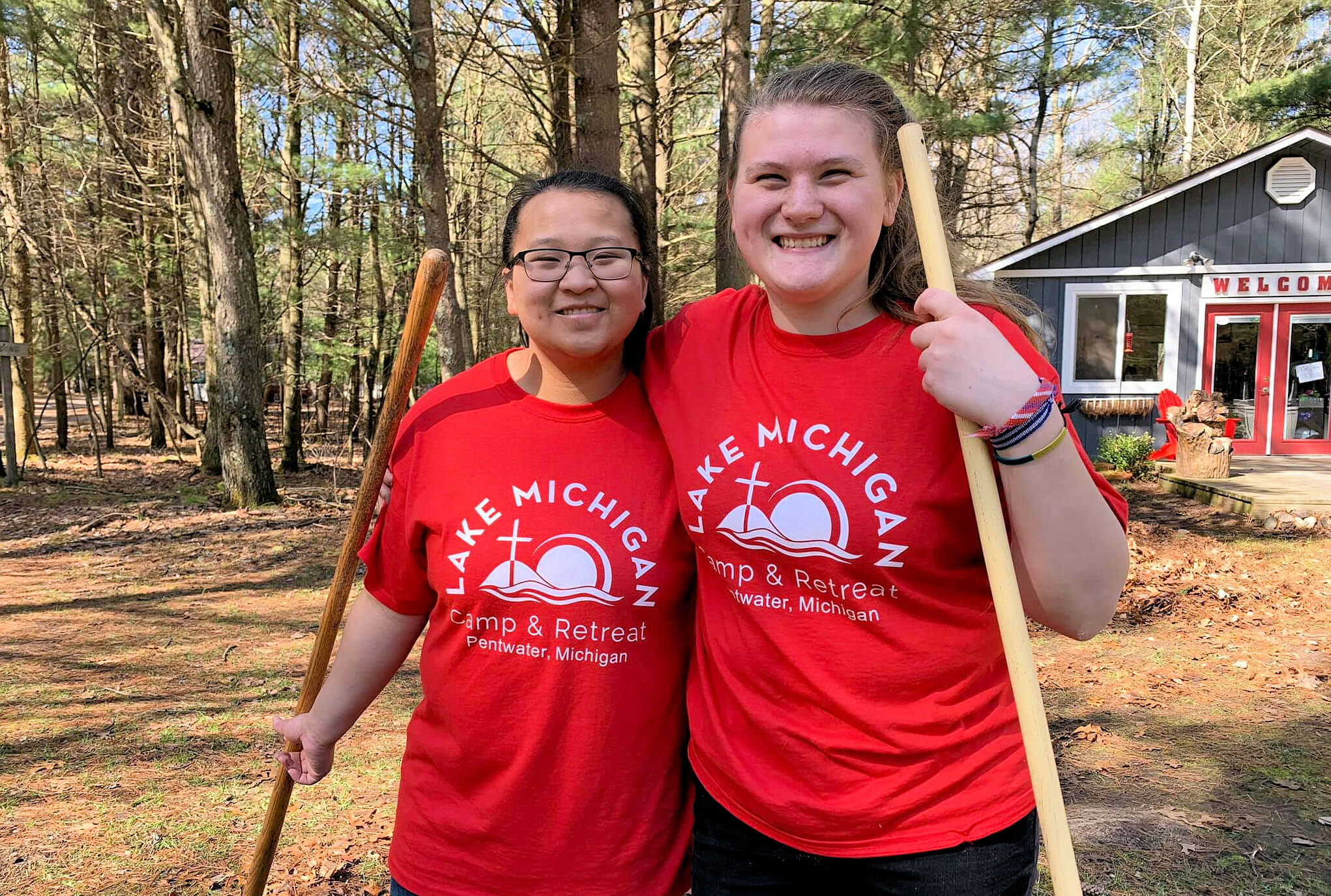 Abby and Kristyn, new on the staff at Lake Michigan Camp, have been busy this week raking tons of leaves to clean up the site for this year's campers and families. ~ Facebook/Lake Michigan Camp and Retreat Center

As a new camping season begins, the 2019 Michigan Annual Conference reaffirmed its strong commitment to United Methodist Camping after three difficult years of operation by the Board of Directors.

It is not often that an account in Volume 1 of the Journal provokes significant discussion on the floor of Annual Conference. But that’s what happened on Thursday afternoon, May 30. During the motion to accept the historic reports, the Rev. George Covintree rose to speak about camping in the Michigan Area. Speaking as a former camper, counselor, and dean, Covintree said, “I’ve seen what camping has done as an important ministry,” Covintree said. “We as a conference need some sense of oversight.” The Rev. Eric Stone then introduced a motion calling for resignation of the present board and the hiring of an outside consultant to design a new organizational structure and strategic plan for camping.

The Rev. Benton Heisler, Director of Connectional Ministry, addressed the concerns expresed. He pointed out that the Conference’s Committee on Nominations, Council on Finance and Administration, and Leadership Team are taking measures to eliminate partisanship and to bring skilled executive leadership to the camping table. “That will do things this motion points to,” Heisler added. “We are making decisions now that every other conference in the jurisdiction made ten years ago.” The conference did not approve suspension of the rules to act on Stone’s motion.

On February 22, 2019 the Michigan Area United Methodist Camping Board announced that operations would be suspended at four of the nine conference sites: Albright Park, Crystal Springs, Myers Lake and Camp Kinawind. The board reported, “A review of factors such as attendance patterns, financial history, site conditions, population concentrations, and a strategic view toward the future led to the Board’s decision. Long-term decisions about these camps have yet to be made.”

In April Bishop David Bard wrote a letter of encouragement to the community of Michigan campers. He noted, “When United Methodist camping in Michigan was spun off into a separate corporation from the Annual Conference, the hope was that the organization would be able to more independently assess the needs and resources of United Methodist camping in the state and arrive at a strategic plan on the basis of which challenging decisions could be made to secure the long-term future.” The bishop continued saying, “For a number of reasons, that kind of plan was not able to be developed before difficult financial realities forced tough decisions.”

On Friday afternoon of the Annual Conference, May 31, Camp Board Chair Paula Timm acknowledged that for the past three years the board sought to unite “two programs run very differently and to stop a financial hemorrhage.” Timm said that “downsizing was talked about from the beginning but was postponed for lack of data.” By February 2019 “painful decisions had to be made for the long-term survival of camping ministry in Michigan.” She remarked of “shuttering of properties and potential sale.” “There were too many camps for the number of users,” Timm reported. (Two years ago it was reported by the Executive Director of Camping that Michigan camp sites were then experiencing only 22% occupancy.) “As disappointed as some of you may be,” Timm said, “we pray your passion for camping will find a way to forgiveness, understanding, and support.”

In legislative work done on Thursday evening, those working on Resolution 2019-8 voted 103 to 3 to approve the Reaffirmation of Michigan Conference Support for Camping Ministry. The motion stated:

The Board of Michigan United Methodist Camping has expressed gratitude for that action. In addition, they are grateful for the conference members’ support at the Snack Table that offers various refreshments during the Annual Conference session. “Your donations of $6,000 for snacks will help more young people to experience the power of camp!”

“We believe our best days and years are ahead of us,” the Board concludes. Learn more at umcamping.org.