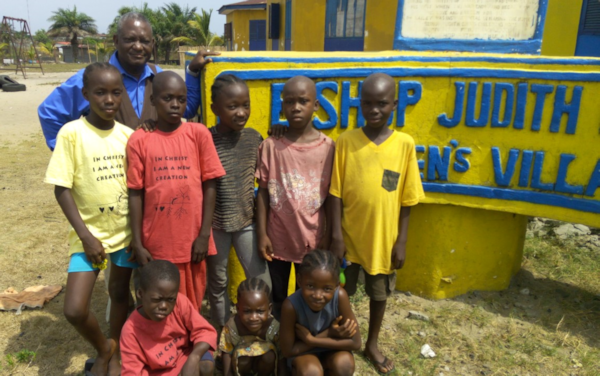 The Bishop Judith Craig Children’s Village thanks Michigan for its faithful generosity.

A portion of the Ingathering at the 2017 Michigan Annual Conference — $29,053.63 — was designated for the Bishop Judith Craig Children’s Village in Liberia.

A month after those dollars were received, the Director of the Children’s Village, the Rev Robert Sieh, came to Michigan for a three-week visit in order to thank churches of The Michigan Area for their dedication to the project. “We are a place where children can live, are fed and clothed, go to school, receive healthcare and be brought up in the Christian faith,” Sieh told MIConnect.

The brochure Sieh shared with supporting congregations adds, “We envision a new breed of young Liberians emerging from the Village, well cared for, nurtured and educated.” In the spirit of Jeremiah 29:11, the Bishop Judith Craig Children’s Village aims to give young people “a future with hope.”

Construction of the Children’s Village took place during the 1990s and doors opened in honor of Bishop Judith Craig in 2000. The first residents arrived suffering after years of civil strife that plagued Liberia. Eight of the present 69 children who call the Village home were orphaned by Ebola. These children live in nine cottages on the site. Other buildings house a clinic, classrooms and administrative offices.

Children are involved in daily devotions, Bible studies, sports, care of facilities, and lessons Kindergarten through 12th grade. “Since the home opened, we have graduated 33 young people,” Sieh reported.

Once children have graduated from high school, they leave the Village. Many have gone on with their education. One has completed a degree at United Methodist University in Monrovia. Another 18 are now enrolled in universities around Liberia and eight more are in vocational training.

Director Sieh lists the ways that previous gifts of Detroit Conference ingatherings have benefitted children at the Village: new chairs, mattresses and bunk beds; window repair; painting; and plumbing. The 2017 Ingathering will be used on four projects to be implemented over the next two years: electrification of the complex, safety fencing, running water in cottages, and purchase of a 22-seat bus. “We also plan to build an endowment for tomorrow,” Sieh noted.

The Bishop Judith Craig Children’s Village is an Advance Special of the General Board of Global Ministries #11820A. The monthly cost to sponsor a child ranges from $266 for Nursery and Kindergarten students to $491 for a 12th grader.

Bishop Judith Craig Children’s Village has a page on Facebook. There’s a post by one blessed by the institution: “The third house on the right. MY HOUSE! While I was at the Village, the Bishop Donald A. Ott Cottage was my family home. In 2000 we were 12 kids with a mother. For the first year we were like strangers, but 2001 up to 2016 we lived as brothers and sisters. God will stand in that gap to provide hope. I am proud to preach the message of thanksgiving to God, my Village family and sponsors.”

Before coming to Michigan Rev. Robert SIeh stopped in Columbus, Ohio to meet Bishop Judy Craig and thank her on behalf of the school that bears her name. On behalf of every child who has found hope within those walls.